Spring football concludes for many of the nation's FBS teams this weekend, and more spring games/final scrimmages are scheduled for the following Saturday. Once April concludes, all eyes turn toward the fall.

Here are 10 players to watch this weekend when you are flipping between final spring contests.

Notre Dame QB Everett Golson: Every quarterback involved in the battle for the starting job will be watched closely on Saturday when the Fighting Irish stage their Blue-Gold game. But Golson is the one I've been most intrigued by because he possesses the perfect skill set for this offense. The rising sophomore has the athletic ability to give the offense a look it hasn't seen since Carlyle Holiday was in South Bend. His biggest issue is accuracy through the air. But if he doesn't turn the ball over, he could have a real chance to win the job. Kelly has maintained that the top criterion for the starting job is taking care of the football. Thus, incumbent Tommy Rees has work to do after committing 19 turnovers last fall. Still, Andrew Hendrix may have the ideal mix of enough experience, athleticism and mental make-up to win the job. He has a strong arm and is fairly accurate.

This weekend, also keep an eye on DaVaris Daniels, who has seen some time with the first-team receivers when John Goodman was banged up. The Irish need their receivers to collectively step up with Michael Floyd on his way to becoming a first-round NFL Draft pick. Running back/receiver Theo Riddick will also line up all over the field as the offensive staff tries to get him in space. 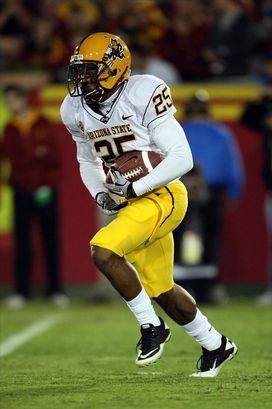 ICONDeantre Lewis averaged just under 6.0 yards per carry in 2010.

Arizona State RB Deantre Lewis: The Sun Devils are very deep at running back, with returning starter Cameron Marshall and James Morrison leading the way. Head coach Todd Graham will also get junior-college transfer Marion Grice and freshman D.J. Foster into the fold this summer. But Lewis is intriguing because he averaged just under 6.0 yards per carry in 2010. However, he missed last season after suffering a gunshot wound that left him with nerve damage in his upper leg. Graham is looking for playmakers throughout his spread offense, and Lewis can provide that firepower. The redshirt sophomore finished the team's first scrimmage with 38 yards on 10 carries and a one-yard scoring run, and he also caught three balls for 15 yards with an eight-yard touchdown reception. Another healthy, explosive body will only help an offensive attack trying to find itself.

Ohio State RB Jordan Hall: Head coach Urban Meyer and offensive coordinator Tom Herman are looking to put the best 11 offensive players on the field this fall as the Buckeyes transition to the spread, and Hall is one of those players who will be used in a variety of ways in space. He has watched tape of former Florida players who have excelled in this scheme, such as Jeff Demps and Percy Harvin, and he has the versatility and speed to line up in the backfield and to be split out at receiver. The 5-9, 198-pounder will enter his final season in Columbus looking to improve on his 408 yards on the ground, 114 receiving yards and five total touchdowns last season. Watch on Saturday how he is used catching passes out of the backfield on screens. The Buckeyes want players like him in the open field.

West Virginia WR Tavon Austin: Dana Holgorsen's offense exploded in the Orange Bowl against Clemson, and it's scary to think what this unit can do with a full year under its belt. As an inside receiver, few players are as exciting to watch with the ball in his hands as Austin, who is one of the most dynamic players in the country. The senior will get even more looks in this offense no matter whether he is lined up in the 'diamond' formation or in the slot. Austin is very difficult to contain. Just ask Clemson, which allowed him to record 117 receiving yards, 46 rushing yards and four scores last January. Oh, and he also happened to have 11 receptions for 187 yards against LSU last fall as well.

North Carolina State RB James Washington: The Wolfpack need a sound rushing attack to complement Mike Glennon's aerial assault, and Washington has a chance to establish himself as the No. 1 back with Mustafa Greene not practicing and scheduled to face a misdemeanor drug paraphernalia charge. Tony Creecy and Brandon Barnes are also in the mix. But Washington, who will be a fifth-year senior this fall, led the Wolfpack in rushing in 2011 with 897 yards and seven touchdowns. He also had 42 receptions for 315 yards, which were the most receptions among returning players. N.C. State’s rushing game ranked 109th nationally last season, so Washington and Co. will need to make the ground attack more respectable.

CONTINUE TO PAGE 2 FOR MORE PLAYERS TO WATCH THIS WEEKEND