CHICAGO—With Big Ten Media Days kicking off Thursday in Chicago, let's take a look at 10 major questions surrounding the league as we near preseason camps.

1. Will there be a mass exodus at Penn State?

Nittany Lion players Silas Redd, Jordan Hill and John Urschel had been scheduled to attend Media Days, but the school announced Wednesday that no player would attend after all. Redd, of course, has been linked to USC. And it appears that he remains unsure of his future. He is likely relieved that he won't have to answer questions from reporters in Chicago. And there are a plethora of other stars who are likely in high demand on campuses across the country after the NCAA ruled that any Penn State player can transfer and be eligible to play immediately. While some players have taken a pledge to stick things out in Happy Valley, can first-year head coach Bill O'Brien realistically hold onto his best younger players when they face a future without a chance at Big Ten titles and bowl games?

2. Is Michigan State the best team in the Big Ten? 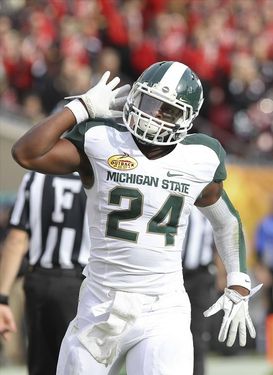 ICONLe’Veon Bell and the Spartans could be looking at a rosy postseason in 2012.

The Spartans showed in their bowl win over Georgia last year that they are the most athletic team in the Big Ten, especially on defense. William Gholston, who is one of the best defensive ends in the nation, will lead a stout defense once again under coordinator Pat Narduzzi. And Le’Veon Bell will pace a sound rushing attack. The major question is whether Andrew Maxwell can suitably fill in for veteran signal-caller Kirk Cousins. Despite losing top receivers B.J. Cunningham, Keith Nichol and Keshawn Martin, the Spartans will look to Tennessee transfer DeAnthony Arnett to give them a big-play deep threat. The former Volunteer had 24 receptions for 242 yards and two touchdowns last season, and he'll be one of Maxwell's top targets.

Michigan, Ohio State and Minnesota have won three consecutive league crowns. The Badgers are aiming to pull off the feat as well after earning back-to-back Rose Bowl berths. But defections on the coaching staff as well as the loss of star quarterback Russell Wilson will make things difficult. However, Heisman Trophy finalist Montee Ball returns to the backfield after rushing for nearly 2,000 yards last season. And Maryland transfer Danny O'Brien should return to his comfort zone in Matt Canada's pro-style scheme after struggling in Gary Crowton's spread attack last season in College Park.

4. How will Ohio State fare in Urban Meyer’s first season?

While the Buckeyes will have to sit out the postseason in Meyer's debut campaign in Columbus, 2012 represents a huge building-block year for a program that is looking to rebound from its off-the-field drama dating back to the Jim Tressel/Terrelle Pryor era. Meyer will be able to rely on a defense that should be more stout than last year's unit, and he was able to bring in SEC-type defensive linemen this past recruiting cycle for co-defensive coordinators Luke Fickell and Everett Withers. And while he has a lot of work to do to become a top-notch FBS quarterback, Braxton Miller is the prototypical signal-caller for this spread offense. And he may have found a go-to receiver in freshman Michael Thomas, who caught 12 passes for 131 yards in the team's spring game.

5. Who will emerge as the starting quarterback in West Lafayette?

Boilermakers head coach Danny Hope has three solid options to start under center: Caleb TerBush, Robert Marve and Rob Henry. How will he balance the reps in preseason camp, and what exactly is he looking for in this offense? All three players have significant starting experience, and Hope can conceivably mix and match. The problem with juggling the three is perhaps not having any of them finding a rhythm. Whoever is at quarterback will be working behind an offensive line that has potential when healthy, and he'll be able to utilize playmaking receiver Antavian Edison as well as a good group of tight ends.