Nebraska: Nebraska will enter its final season in the Big 12 as the favorite to capture back-to-back outright North division titles. Quarterback Zac Lee still hasn’t officially locked up the starting gig in Lincoln, but I expect him to be under center for the opener while Cody Green and Taylor Martinez see action in specially designed packages. The 6-2, 215-pound senior is finally healthy, but while the offensive line didn’t always offer the best protection, Lee failed to bail out his offense more times than not last season. If the Cornhuskers are forced to have the defense once again carry Lee & Co., a spot in the Big 12 championship game will likely escape them. But with receiver Niles Paul and running back Roy Helu Jr., I think the Huskers could be a more prolific offense this fall — assuming the play-calling isn’t too vanilla like it was too often last season.

Missouri: Quarterback Blaine Gabbert took over for Chase Daniel in ’09 and exceeded expectations, throwing for 3,593 yards while playing much of the season on a bum ankle. Gabbert has all the tools to continue to further impress NFL scouts, but how will the loss of receiver Danario Alexander affect his production? He had a tendency to force the football down the field even with Alexander and was often burned by picks in big games. Derrick Washington was expected to pace the rushing attack after getting into the best shape of his career, but he was indefinitely suspended Thursday after being accused of sexual assault by a former tutor. Sophomore Kendial Lawrence will now likely assume the bulk of the carries, but the loss of Washington is a huge blow to this offense. The Tigers, who graduated only five seniors, lost linebacker Sean Weatherspoon to the NFL. But sophomore defensive end Aldon Smith returns, and last year's Big 12 newcomer of the year who recorded 11.5 sacks will continue to be a disruptive force. Head coach Gary Pinkel has produced five straight bowl bids for the Tigers — and six in seven years — but last year's forgettable bowl performance likely has been a motivating factor all offseason.

Kansas State: The Wildcats are an interesting team offensively. We know how good tailback Daniel Thomas was last season, as the junior-college transfer rushed for 1,265 yards and 11 touchdowns while averaging over 5 yards per carry. But will K-State be able to move the ball through the air? Carson Coffman is still battling Sammuel Lamur and Collin Klein for the starting job, but the edge likely goes to Coffman, who started the first four games last year. K-State returns only five starters on offense, but four offensive linemen are back. A completely new set of receivers will be on the field, however, highlighted by transfers Brodrick Smith and Chris Harper. Senior Aubrey Quarles does return, though, after redshirting last season. If the Wildcats are balanced on offense and head coach Bill Snyder gets the defense to play like some of his past rugged units, they could go bowling. I really like the safety tandem of Emmanuel Lamur and Tysyn Hartman.

Iowa State: The Cyclones surprised me with their bowl appearance last season. Austen Arnaud was working in his third offensive system in four seasons, and it really seemed to hamper his game. He tossed 14 touchdowns but also threw 13 interceptions and was really inconsistent. Perhaps he’ll be more settled as he enters his senior campaign. Running back Alexander Robinson also returns — one of nine returning starters on offense — as the Cyclones look to improve their 73rd-ranked offense from ’09. Defensively, Iowa State returns only four starters from a unit that finished second in the Big 12 in turnovers gained. I like head coach Paul Rhoads and believe he can keep the Cyclones competitive in 2010 despite a tough opening schedule — a Thursday night opener against a tricky Northern Illinois squad, a trip to Iowa and the conference opener against Kansas State at Arrowhead Stadium. Weathering that early storm will be critical. 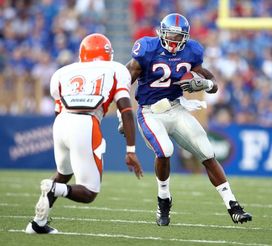 ICONWith Toben Opurum moving to LB, Angus Quigley will get the bulk of the carries for the Jayhawks.

Kansas: New head coach Turner Gill and offensive coordinator Chuck Long will have the Jayhawks winning consistently eventually in Lawrence. But 2010 could be a bit of a struggle. Kale Pick beat out redshirt freshman Jordan Webb for the starting quarterback job, and Long believes that he is a good fit for his offense. The Jayhawks have to replace over 2,200 receiving yards and 17 touchdowns — production from Dezmon Briscoe and Kerry Meier in ’09 — with Jonathan Wilson and Bradley McDougald. Leading rusher Toben Opurum was moved to linebacker, so 230-pound senior Angus Quigley will get most of the carries, with redshirt freshman Deshaun Sands and promising freshmen James Sims and Brandon Bourbon vying for reps. Defensive coordinator Carl Torbush takes over a unit that yielded 28.4 points and 383.3 total yards per game in ‘09. The team really struggled to defend the pass, so one of the big issues is whether or not the front seven could generate a better pass rush.

Colorado: How long will Dan Hawkins remain in charge in Boulder? His big-time recruits haven’t panned out, his team suffered one of the most embarrassing losses in school history last year against Toledo and the Buffaloes just simply don’t win a lot of games. There’s hope offensively with Scotty McKnight and Michigan transfer Toney Clemons at receiver, but the defense was horrid in ’09 — and has been for awhile. His record of 16-33 in Boulder makes it obvious that it is a win-or-else campaign in 2010. We’ll see if Tyler Hansen could settle in as the starting quarterback. He seemed to progress as the ’09 season went on, throwing for over 250 yards in three of his final four games. However, he tossed three interceptions in the season finale. Rodney Stewart is a deceptively tough running back, and the Buffs would be wise to use him more as a receiver to get him out into open space. 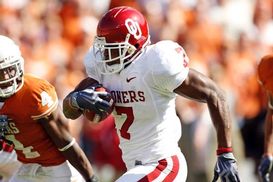 Oklahoma: The Sooners will get much better play from their offensive line this fall — and that will do wonders for this offense and the team’s fortunes. Quarterback Landry Jones held his own after being thrown into the fire last year when Sam Bradford went down, as he broke the Rams rookie’s freshman passing yardage record en route to being named Big 12 offensive freshman of the year. With go-to receiver Ryan Broyles, the passing game is in good hands. I’ve been ri ding the “DeMarco Murray will stay healthy for a full season” bandwagon all offseason, and I believe he could assert himself as a Heisman contender. The defense lost some very good players — there’s no question about that. But there is plenty of talent available for defensive coordinator Brent Venables. Junior Travis Lewis, who led the Sooners in tackles his first two seasons, heads a better than advertised linebacking crew, while the defensive line and secondary should be solid. Do the Sooners reclaim the South division this season?

Texas: Head coach Mack Brown wants to re-establish the run this fall in Austin, and he’ll have the backs in Fozzy Whittaker and Tre’ Newton to be productive on the ground. But this is Garrett Gilbert’s team now, and the Longhorns are ready for the sophomore to lead the offense after he held his own against a fierce Alabama defense in the national championship game last season. Losing receiver Jordan Shipley hurts, but junior Malcolm Williams and seniors James Kirkendoll and John Chiles are ready to help Gilbert in his first full season as a starter. Will Muschamp had to replace some key cogs on defense, but the talent cupboard is not bare in Austin — it’s just young. But neither Muschamp nor Brown is worried. The secondary may be the strength of the team while the linebackers and linemen get comfortable in some of their new roles. Will the ‘Horns keep rolling post-Colt McCoy?

Texas A&M: Quarterback Jerrod Johnson returns to direct an offense that ranked fifth nationally in ‘09 and returns its core skill players, including receiver Jeff Fuller. Johnson set school records in touchdowns, yards, completions and total offense last season, and if he can lead A&M to an early road victory at Oklahoma State and play well against Arkansas at Cowboys Stadium, he could position himself on the Heisman radar. The Aggies’ defense will be run by new coordinator Tim DeRuyter, who has installed the 3-4 after A&M finished outside the top 100 in total defense the last two seasons. DeRuyter led Air Force’s defense last season, and the Falcons finished 11th nationally in total defense and 10th in scoring defense. The formerly ferocious “Wrecking Crew” has been anything but intimidating, but we should see a lot of zone blitzes and zone pressures modeled after the Pittsburgh Steelers. 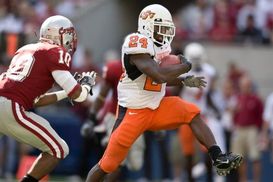 ICONKendall Hunter is one of the best rushers in the Big 12.

Oklahoma State: It will be very interesting to see how Brandon Weeden performs in Dana Holgorsen’s spread offense in Stillwater. The 26-year-old junior and former New York Yankees farmhand has the talent to excel in this offense. But with just one experienced offensive lineman up front, along with the new scheme, it may take some time for the Cowboys to gel. It won’t, however, take senior Kendall Hunter any time to get going, as he will try to put his injury-riddled ‘09 behind him and resemble the player who led the Big 12 in rushing with 1,555 yards and 16 scores in 2008. Defensively, second-year coordinator Bill Young will be replacing nine starters.

Texas Tech: Taylor Potts was chosen to start the season under center after leading the Big 12 in passing yards per game in ’09 at 313. Expect fellow senior Steven Sheffield to see the field at some point, but Potts is the most talented signal-caller on the roster. He isn’t your average Red Raiders quarterback, possessing a bigger arm than his predecessors. Tech will still throw the football under new head coach Tommy Tuberville and new coordinator Neal Brown, but expect Baron Batch to get more carries to give the offense a little more balance. Expect a less conservative approach on defense under new coordinator James Willis, who coached linebackers under Tuberville at Auburn and Nick Saban at Alabama. Tuberville wants to claim South division superiority. He just may be a fit in Lubbock after all.

Baylor: Baylor’s season, fair or not, rests on the knee of Robert Griffin. After tearing his ACL last year, he seems to be healthy. But we’ll need to see how it holds up after game action. Before the injury, he was one of the most dynamic players in the country. What’s most impressive is that he set the NCAA record with 209 straight passes without an interception to start his career. Not only does he make good decisions with the football, but he can take off and gain big chunks of yards on the ground. Running back Jay Finley also is healthy after an injury-plagued ’09. With Griffin leading a productive passing attack, Finley should have plenty of chances to exploit opposing defenses with his speed and athleticism. I don’t know if the Bears can stop some of the better Big 12 offenses, but a healthy Griffin will always give them a chance to compete.