With the opening weekend of the 2013 college football season here, let’s take a look at the fourth of the National Football Post’s conference previews.

Here are the major storylines playing out in Jim Delany's Big Ten Conference:

New head coach Gary Andersen takes over for Bret Bielema, who is now trying to rebuild Arkansas. The Badgers bring back James White and Melvin Gordon to a backfield that is always stocked, so Andersen will rely on a productive ground game. But how much will the offense change for a team that went just 4-4 in Big Ten play last year but found its way to Pasadena because of sanctions at Ohio State and Penn State? Will the physical nature of the team still be prevalent? Because that was a huge part of Wisconsin teams under Bielema. I would expect the offense to show some multiple looks — a power team still but with some spread principles. Andersen knows what he’s doing, as he made a winner out of Utah State. So athletic director Barry Alvarez should feel confident in the direction of this program under the new head man. Another appearance in Pasadena will be difficult, though, because the secondary is green. 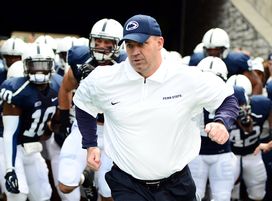 US PRESSWIREBill O’Brien is coming off of a fantastic first season in State College.

Depth issues remain a concern for 2012 Big Ten coach of the year Bill O’Brien’s squad, but the Nittany Lions were able to make it to eight wins in Year 1 of NCAA sanctions. Despite not having yet settled on a quarterback, there’s no need to worry if you are a fan of the Nittany Lions. Just think back to last fall and how the former longtime NFL offensive coordinator was able to coax a fantastic season out of Matt McGloin. The former walk-on was the Big Ten's most prolific passer in 2012, throwing for 3,266 yards with 24 touchdowns and just five interceptions. While no one is expecting true freshman Christian Hackenberg or JUCO transfer Tyler Ferguson to put up such numbers, either one will be successful in this offense this fall. Whoever is operating the unit will be surrounded by good tailbacks led by 1,000-yard rusher Zach Zwinak, a nice assortment of tight ends and a deep receiving corps led by star junior Allen Robinson. Because both QBs are more similar than different, the offense should look the same no matter who starts. And the weapons around him will ease the transition. Hackenberg is the future at the position, but the race has been close and both signal-callers could play this year.

The Buckeyes completed their first undefeated season in a decade and will look to do it again under Urban Meyer, whose team returns nine starters on offense for his power spread scheme. But Heisman Trophy-contending quarterback Braxton Miller needed more weapons, and he has more now with JUCO receiver transfer Corey Smith and true freshman Dontre Wilson, a former Oregon commit who could be a poor man’s De’Anthony Thomas and serve that Percy Harvin hybrid role in this offense. If Miller can stay consistent with his footwork, he should be a much more accurate and better passer. He also will be expected to be better going through his progressions and rely a little bit less on his legs — just a little — when the first option isn’t there.

Don't forget about Gardner and T-Magic

Michigan’s Devin Gardner took over for Denard Robinson in the team’s final five games of 2012 and really thrived. He’s an athletic signal-caller with a big arm who is poised for a big year if his decision-making improves. Meanwhile, Nebraska’s Taylor Martinez — who is the all-time career yardage leader in school history — continued to improve as a passer and often put the team on his back in the second halves of games during comeback wins. But he needs to drastically cut down on his turnovers. He lost eight fumbles and threw 12 interceptions in 2012. These two dual-threats sometimes get a bit overlooked because of Braxton Miller playing in the same league, but they both should have huge seasons as they try to lead their respective teams to a Legends division title. The Cornhuskers, in particular, need improved defensive play.

Can Michigan State win the Legends?

The Spartans could have an even better defensive team this year than last, but quarterback Andrew Maxwell and this offense have to do their part as well. Maxwell struggled last season in his first year as the starter, but his weapons did not help him out very much. Keep an eye on Aaron Burbridge, who is expected to make a big jump at receiver. Senior Bennie Fowler and junior Keith Mumphery also need to be much more reliable pass-catching targets.

The two-QB system at NU

Coming off of their first bowl win since the late 1940’s and a double-digit win season, can the two-QB system of Kain Colter and Trevor Siemian continue to work for the Wildcats? Both are very unselfish players, but there were times last year when I thought the tempo of the offense suffered when they were shuffled in and out. I like Colter when he is moved all around the field, however, and running back/returner Venric Mark is one of the most exciting players in the country.

Expect a much-improved Illinois quarterback Nathan Scheelhaase in new coordinator Bill Cubit's offense, and it will be sorely needed as second-year head coach Tim Beckman looks to bounce back from a brutal first season in Champaign.

Kevin Wilson was able to bring in a trio of true freshmen from Indianapolis — defensive tackle Darius Latham, defensive end David Kenney and cornerback Antonio Allen — who should play right away as the Hoosiers look to get more athletes on the field on that side of the ball. Improvement is sorely needed on defense, but the offense should be fantastic.

Darrell Hazell didn't exactly inherit a stocked cupboard in West Lafayette, but the first-year Purdue head coach does have some nice pieces on defense, including end Ryan Russell and cornerback Ricardo Allen. Rob Henry won the starting quarterback job, and the dual-threat quarterback will try to finish his career with one final healthy season.

Iowa was abysmal on offense last year, but the Hawkeyes return Mark Weisman and Damon Bullock at tailback. New quarterback Jake Rudock will look early and often for tight end C.J. Fiedorowicz, but can this defensive front pressure the quarterback?

Minnesota was noticeably improved on defense last year, especially in the secondary. But can the Golden Gophers stop the run, especially when the weather turns late in the year?