With the opening weekend of the 2013 college football season here, let’s take a look at the fifth of the National Football Post’s conference previews.

Here are the major storylines playing out in Mike Slive's Southeastern Conference:

There are four new head coaches in the league, and all of them have managed to hit the ground running. Hiring Gus Malzahn was in many ways an easy decision for Auburn to make, and the former Tigers OC made a very good hire in Ellis Johnson, who will turn around the defense in due time. But can former Georgia cornerback and prolific JUCO signal-caller Nick Marshall be the answer for this offense? He must limit his turnovers if the Tigers want to sneak into the postseason. 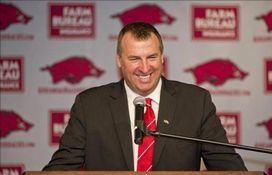 US PRESSWIREBret Bielema has brought toughness to Fayetteville.

At Arkansas, Bret Bielema has brought toughness from Wisconsin. And while he wants to install a power run game in Fayetteville, I expect the Razorbacks to still throw the football considerably under coordinator Jim Chaney. The ascension of redshirt sophomore Brandon Allen prompted Brandon Mitchell to transfer to NC State.

For Butch Jones, the offseason could not have gone any better. He has compiled a very strong crop of verbal commitments for the Vols' Class of 2014, but now all of the attention turns toward the field, where the Vols have major issues on offense despite the O-Line being one of the best in the nation. Adapting well to the new 4-3 defensive scheme is crucial, but the schedule is treacherous. Tennessee has road tilts against Oregon and Florida in September, and the Vols have home games against Georgia and South Carolina before travelling to Alabama before the month of October ends.

First-time head coach Mark Stoops has also done a wonderful job on the recruiting trail, and he has managed to stir the Wildcats fanbase into a frenzy. Finding an identity on offense will be a chore, but coordinator Neal Brown's unit should be exciting. It may take time to build the 'Cats into the type of program that Rich Brooks had in Lexington, but Stoops could be the right man for the job. The line is intriguing and will be the heart and soul of a young defense.

Can the Gators compete for a league title with that offense?

Dual-threat quarterback Jeff Driskel was one of the most sought-after players in his class coming out of high school, and classmates such as Brett Hundley and Braxton Miller are poised for Heisman Trophy runs. But a lot of pressure will be on Driskel this season to continue to develop as a passer, improve at avoiding sacks and show more confidence in the pocket. The offensive line should be solid, but do the Gators have enough playmakers surrounding Driskel? The signal-caller, who passed for more than 200 yards in a game just twice all of last season, does not have a ton of playmakers around him outside of tailback Matt Jones and do-everything Trey Burton. If UF wants to keep defenses from stacking the box, Latroy Pittman and Quinton Dunbar must play like veterans. The most intriguing player is true freshman Demarcus Robinson, who has ideal size, strength and speed. Can he be the explosive receiver the Gators desperately need on a consistent basis? There's a reason why Loucheiz Purifoy, the team's best corner, will take snaps on offense. For me, whether or not they have enough weapons to be a serious SEC title contender is my concern for the Gators.

Alabama will try to win its fourth BCS national championship in five seasons, which would essentially cement this program as a dynasty in the modern era. And the Crimson Tide have as good of a shot as any team to win it all because of a defense that will be strong once again and an offense that features quarterback AJ McCarron, receiver Amari Cooper and running back T.J. Yeldon. Coordinator Doug Nussmeier was able to take some chances last year because of the improved talent at the receiver position, so the offense will only continue to get stronger.

A big year for Mettenberger?

LSU struggled offensively in 2012, particularly in the early part of the season. But Zach Mettenberger started to get more comfortable under center against Alabama, and the Tigers closed strong. While Les Miles will always prefer a run-first operation, this offense will be opened up a bit by new coordinator Cam Cameron. The former student of the "Air Coryell" offense loves utilizing his tight ends as well as his tailbacks and fullbacks as pass-catchers out of the backfield, but ultimately Mettenberger will get to take shots down the field. And he has almost his entire receiving corps back except for Russell Shepard. A player who threw for over 200 yards in four of his final five games of 2012 could be primed for a breakout year. The defense lost an abundance of talent from last year's squad, however. The line should be okay, but there are questions at linebacker and in the secondary. Still, never count out a Les Miles squad.

Bulldogs coordinator Todd Grantham's defense is incredibly young, and that is cause for concern despite being able to develop a little bit of depth last year. Perhaps no other unit in college football lost more from its 2012 group than Grantham's unit. Linebackers Jarvis Jones, Alec Ogletree and Cornelius Washington, defensive tackles John Jenkins, Kwame Geathers and Abry Jones, safeties Bacarri Rambo and Shawn Williams, and cornerback Sanders Commings are all gone. In all, the ‘Dawgs lost 12 players on defense who started at least two games for them in 2012. But they still return a lot of talent to their 3-4 scheme. However, it's filled with youth, although Grantham and head coach Mark Richt may enjoy not having to deal with a sometimes underachieving bunch like last year. The reason for SEC title hope lies with the offense, which will once again be led by veteran quarterback Aaron Murray and the running back tandem of Todd Gurley and Keith Marshall. The unit will score a lot of points this fall. Can it carry the way until the defense gels?

Linebacker could still be an issue for the Gamecocks, but this appears to be Steve Spurrier's best team yet in Columbia. Jadeveon Clowney, Chaz Sutton and Kelcy Quarles help form one of the best defensive lines in the country, the combo of Connor Shaw and Dylan Thompson at quarterback just may work, and playmakers such as Mike Davis and Shaq Roland should be ready to step in for Marcus Lattimore and Ace Sanders at running back and receiver, respectively. The SEC East may come down to the Georgia-South Carolina game in Athens on September 7.

They're coming for ya, A&M

Texas A&M will have a target on its back all season long after its standout debut season in the SEC, and all eyes will be on the rematch with Alabama early in the year. Besides seeing how he will operate without coordinator Kliff Kingsbury and left tackle Luke Joeckel, the major question is how quarterback Johnny Manziel will fare with defenses prepared to play a ton of zone defense and make the Heisman Trophy winner beat them with his arm. I love the ground game and wide receiver Mike Evans, but five starters have departed from the front seven of the defense.

Ole Miss quarterback Bo Wallace could be primed for a huge season, but he has to make sure he protects the football. Much of last season's surprise team returns, and the defensive front should be nasty, especially with the addition of Class of 2013 top prospect Robert Nkemdiche. If the Rebels get instant production from some of the top players they signed in February, look out.

Vanderbilt has arguably the most underrated receiver in the country with Jordan Matthews, and the backside of the defense is the strength of the unit. How long will Chris Boyd be out, and can Austyn Carta-Samuels adjust to the grind of SEC play?

Mississippi State needs to find new weapons at receiver for veteran quarterback Tyler Russell, and the secondary has to replace Johnthan Banks and Darius Slay at cornerback. Ends Denico Autry and Ryan Brown lead what should be a solid defensive line. But can the Bulldogs keep their heads above water in this league, especially with in-state rival Ole Miss on the rise?

Missouri didn't adjust to SEC play quite like Texas A&M did, but top Class of 2012 receiver Dorial Green-Beckham should emerge as a true weapon if James Franklin stays healthy at quarterback and protection issues up front don't plague this offense.