National Signing Day — college football's version of an entry draft — is this Wednesday. Here is a look at the names to know and the teams to watch.

All eyes will be on California's Adoree' Jackson this Wednesday.

Late last week I updated the National Football Post's rankings of the Top 25 senior prep players in the country who have yet to commit to a program. Included in that list is California cornerback Adoree' Jackson, a 5-10, 182-pounder who has dreams of competing in the 2016 Summer Olympics as a track and field star. He has USC, UCLA, Florida and LSU in the mix for his Letter of Intent. While he often gets compared to De'Anthony Thomas because of his ability to make plays in space, he also possesses the defensive skill set necessary to emerge as a shutdown corner at the next level. He is one of many top prospects who will announce his college destination in front of a national television audience starting early in the morning and continuing into the afternoon on Wednesday. Below is a tentative NSD announcement schedule for the top uncommitted 2014 recruits. All times are Eastern and subject to change.

It is almost a certainty that Alabama will claim the No. 1 spot in the final team rankings once National Signing Day is complete. The Crimson Tide have been a recruiting machine under Nick Saban, and it will be no different this year with top talent such as offensive tackle Cameron Robinson, defensive end Da'Shawn Hand, athlete Bo Scarbrough and cornerback Marlon Humphrey, just to name a few. Receivers coach Billy Napier and defensive coordinator Kirby Smart are two of the best recruiters in the nation, and their work has paid huge dividends once again. With 'Bama set to assume the top ranking, the battle for the remaining four spots in the top five will be interesting. How strong will Florida State close following the Seminoles' BCS national championship win? Kevin Sumlin has a loaded class this cycle at Texas A&M and could finish No. 2. Defensive line coach Terry Price did a fantastic job of addressing the team's porous D-Line, and end Myles Garrett was arguably the best player in Texas this past season. Finally, keep an eye on Florida and Miami (FL), which had a big final hosting weekend. The Gators always have a chance to be dangerous closers, and the 'Canes also have a chance to be late movers up the team rankings as well. 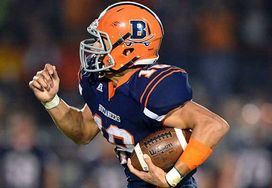 Jalen Hurd is one of the jewels of Tennessee's class.

Tennessee’s incredibly strong 2014 crop became even deeper with the commitment last week of North Carolina's Derrell Scott, who is the third running back in the class along with in-state star Jalen Hurd and Georgia's Treyvon Paul. The haul is littered with talent on both sides of the ball, including wide receiver Josh Malone and safety Todd Kelly, Jr. Of the 34 commitments, 14 have already enrolled and will participate in spring practice. Head coach Butch Jones put together a nice class last year, but it was nothing compared to what he has been able to assemble this cycle. When Signing Day arrives, the Vols are positioned to bring in a class that will rank in the Top 5 nationally. Kudos to Tommy Thigpen, who is a tireless recruiter and has had a hand in a lot of the verbal pledges.

Here are some programs to keep an eye on as they look to strengthen their classes as Signing Day nears:

Florida State: Some of the best uncommitted prospects have the Seminoles on their final lists. Wide receivers Malachi Dupre and Ermon Lane as well as defensive linemen Malik McDowell and Derrick Nnadi remain in play. Can Jimbo Fisher use the momentum from the BCS title and bring in a class that is only second to Alabama?

USC: New head coach Steve Sarkisian and his staff have stabilized the program on the recruiting trail, and the Trojans' haul includes a nice mix of offensive and defensive linemen, which were two areas of need. But all eyes will be on whether they can land either cornerback Adoree' Jackson or athlete JuJu Smith. It may be hard to land both, but it would be a tremendously huge coup.

Auburn: Co-offensive coordinator Dameyune Craig is hoping that he can bring in dual-threat quarterback Treon Harris, who is currently a Florida State commitment. Craig already was able to get running back Kamryn Pettway away from a pledge to the 'Noles.

LSU: Another SEC team to monitor is LSU, which is trying to take advantage of an incredibly deep pool of talent in the state of Louisiana this cycle. Running backs coach and recruiting coordintor Frank Wilson was able to get the nation's top player, Leonard Fournette, to come to Baton Rouge and hopes that receiver Malachi Dupre and linebacker Kenny Young (high school teammates) will become Tigers as well.

Michigan State: The Spartans have emerged as a real player as of late on the recruiting trail, and they still have a good shot of landing Malik McDowell. Mark Dantonio and Co. are also trying to get Ohio State offensive tackle commit Jamarco Jones and Wisconsin defensive tackle commit Craig Evans.

Notre Dame: The Fighting Irish already have a very good class. But can they land either JuJu Smith or Michiah Quick? Smith may be leaning toward USC or Oregon, while Oklahoma could be the landing spot for Quick.

— Anything James Franklin touches turns to gold. He is doing a marvelous job at Penn State since arriving in Happy Valley. The Nittany Lions are bringing in plenty of help for rising star quarterback Christian Hackenberg.

— NC State is one of my five under-the-radar classes.

— Derek Mason and Bobby Petrino have tough chores this cycle at Vanderbilt and Louisville, respectively.

And if you don't know the name now, you will very soon...

Via MaxPreps High School Sports, here are Leonard Fournette's 2013 highlights . The LSU-bound running back will make an instant impact in Baton Rouge.