Some of the biggest names in the 2014 NFL Draft will not be taking part in Senior Bowl festivities in Mobile, AL, this week because they are underclassmen, such as Teddy Bridgewater and Johnny Manziel.

But there are still plenty of high-quality players worth watching down South.

Here are the most intriguing seniors that I will be keeping an eye on this week heading into Saturday's game...

Virginia Tech quarterback Logan Thomas: The 6-5, 256-pounder has very good mobility for his size and was able to take care of his body during his up-and-down career with the Hokies. He has a big arm and would have likely put up big numbers on the stat sheet with better surrounding talent. However, a quarterback will always be judged by wins and losses, so Thomas has a lot to prove leading up to the draft. He is not very mechanically sound in the pocket and has forced too many throws during his time in Blacksburg. He has a chance for a fresh start this week, though, while working in a pro scheme with good surrounding talent.

Miami (FL) offensive tackle Seantrel Henderson: The oft-suspended Hurricanes right tackle possesses very good size and length. While he also has good agility, he is not technically sound as a run blocker or pass protector. Perhaps the biggest thing he needs to prove to scouts is increased maturity. The 2009 USA Today high school offensive player of the year can rise up draft boards if he shows that he's focused on becoming a better player and leader. 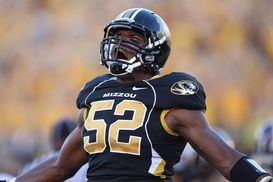 Can Michael Sam be an effective defender against the run at the next level?

Missouri defensive end Michael Sam: The Tigers have done a nice job of sending defensive linemen to the next level, but some scouts wonder how effective Sam will be in the pro game. The pass-rush specialist doesn't have great power and size against the run, so the SEC defensive player of the year will need to perform well in one-on-one drills to squash some doubts and show that he could be more than a one-trick pony after leading the SEC in sacks (10.5) and tackles for loss (18).

Nevada offensive tackle/guard Joel Bitonio: The 6-4, 315-pounder is expected to be asked to play guard this week after not playing guard with the Wolf Pack. He has a good motor but will have to show well this week in a position switch against some of the better pass rushers in this draft. He played well when he faced Anthony Barr in Nevada's game against UCLA this past season.

Oregon wide receiver Josh Huff: This is a very strong and deep draft at wide receiver, and one player who could move up boards is Huff. While he may be slotted now for the middle rounds, the speedster can improve his stock after seemingly going under the radar in the Ducks' high-octane attack despite catching 62 passes for 1,140 yards and 12 touchdowns. The NFL is a vertical league, and Huff can help a team immediately.

Miami (FL) QB Stephen Morris: He has a big arm and good mobility. But he is sloppy with his footwork and forces too many footballs. There are also concerns about his durability.

Wake Forest WR Michael Campanaro: The Demon Deacons' all-time leading pass catcher missed the last three games of this past season with a broken collarbone, but he could be a very good, tough, slot receiver at the next level.

North Dakota State OT Billy Turner: A member of North Dakota State's last three FCS national championship teams, Turner did not give up a sack in any of the team's 15 games this past season.

Western Kentucky RB Antonio Andrews: A staple of midweek television as a Sun Belt star, Andrews rushed for at least 100 yards in every game in 2013 except for a 99-yard effort against Kentucky. The all-purpose player can help a team in a variety of ways, including as a pass-catcher out of the backfield and as a kick/punt returner.

Arkansas DE Chris Smith: He may be the best defender America doesn't know about after playing for a couple of bad Razorback squads. But Smith is a good pass rusher and run defender.