On Monday at the NFP I offered five names to watch this season in the Big 12.

Today, as we look ahead to the 2012 college football season, let's take a look at five players who will be on the spot in the ACC throughout the fall.

Miami RB Mike James: With Lamar Miller departing early for the NFL, James becomes the Hurricanes' No. 1 running back. Last season as Miller's backup, the 5-11, 222-pounder rushed for 275 yards on 72 carries with seven touchdowns. He is coming off of a strong spring season, and that's big for an offense that is looking for playmakers to emerge with two of its top receivers from a year ago, Travis Benjamin and Tommy Streeter, also gone. Keep an eye on freshman Randy "Duke" Johnson as well. The 5-9, 182-pounder recorded over 5,000 yards and 70 touchdowns in his high school career, so he could be another piece for offensive coordinator Jeff Fisch to utilize.

WR Marcus Davis, Virginia Tech: The time is now for the senior Davis to shine, as there aren't too many players who possess his athletic ability at the WR position. The 6-4, 228-pounder can be a bit inconsistent, but he is set to be quarterback Logan Thomas’ top target. He had 30 catches for 510 yards and five scores last fall, and he will be counted on to be the top Hokies receiver with Danny Coale and Jarrett Boykin gone. It will be interesting to see if he improved his route running this offseason because getting better in that aspect of his game will greatly increase his production. 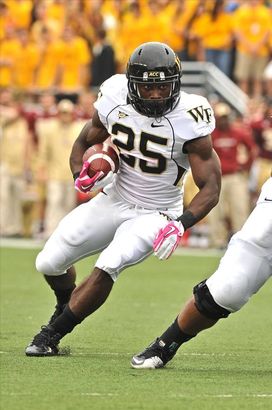 ICONIf he's healthy, Josh Harris can be a big part of the Wake Forest offense.

RB Josh Harris, Wake Forest: The Demon Deacons are an intriguing squad heading into the 2012 season, especially on offense. The quarterback-wide receiver duo of Tanner Price and Michael Campanaro is underrated, 2011 ACC defensive rookie of the year Bud Noel headlines a solid secondary and Jim Grobe is one of the more undervalued head coaches in the nation. But it's Harris who could be the real wild card for this squad. The running back needs to stay healthy, though, after a hamstring issue limited him to just five full games in 2011. Orville Reynolds and DeAndre Martin will continue to push him for carries, but he showed in the spring game that he could be a No. 1 back if he can hold up between the tackles. Keep an eye on the offensive line as well because the unit is replacing four starters.

LB Eli Harold, Virginia: Harold was one of the top outside linebackers in the Class of 2012. But he was also a standout receiver, running back and quarterback as well. That's the kind of athlete Cavaliers head coach Mike London landed this past February. The 6-3, 230-pounder has the potential to be one of the better pass rushers in the ACC. He has the frame to add bulk and not lose any speed, and he could be a real threat on obvious passing downs. There's a reason why programs such as LSU and Florida were after his services.

WR Stefon Diggs, Maryland: The athletic true freshman should see immediate time as a kick returner and wide receiver in coordinator Mike Locksley's multiple-look offense. The dynamic playmaker could see his role continually grow if he's able to pick up the offense quickly this fall, and he could emerge as a real weapon for quarterback C.J. Brown as head coach Randy Edsall looks to bounce back from an atrocious debut season in College Park. He could also potentially see time in the defensive backfield, as well, but I think his real value to the Terrapins will come on the offensive side of the ball. But he did snare four interceptions as a senior, so he's used to making plays defensively.