We're all familiar with some of the biggest stars in the Big 12. Landry Jones (Oklahoma), Collin Klein (Kansas State) and Jackson Jeffcoat (Texas) are just some of the most notable names in the conference.

As we look ahead to the 2012 college football season, let's take a look at five players who will be on the spot in the Big 12 throughout the fall.

Baylor QB Nick Florence: Florence has the impossible task of replacing the No. 2 pick in the 2012 NFL Draft, Robert Griffin III, who single-handedly put Baylor football on the national map last season. The new Bears starting quarterback has playing experience, however, after starting in 2009 when RGIII was hurt. He also stepped in this past season and led the team to a win over Texas Tech. Florence will be throwing behind a strong offensive line and will have a big receiver in Terrance Williams who will pick up where Kendall Wright left off. But can Florence, who has one more career interception than touchdown, play well for 12 weeks?

Oklahoma State WR Josh Stewart: Stewart is coming off of a great spring and may become the Cowboys' new go-to receiver with Justin Blackmon off to the NFL. He has good hands and may be relied upon throughout his sophomore season by true freshman starter Wes Lunt, who won the right to replace prolific quarterback Brandon Weeden in spring drills. Besides Blackmon, the Pokes lost a lot of their receiver depth from last season, so a breakout year from Stewart is vital after he caught 18 passes and had 261 kickoff return yards last season. 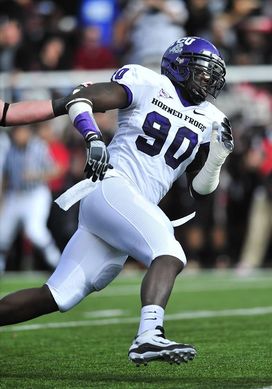 TCU DE Stansly Maponga: Maponga is already well-known by TCU and Mountain West fans after leading the Horned Frogs in sacks with 9 and tackles for loss last season with 13.5. He also forced five fumbles in 2011. But with Gary Patterson's bunch now in the Big 12, the spotlight will shine a little brighter on the 2011 first-team all-Mountain West selection. While he may be going against better offensive tackles in the new league, he also will be facing more pass-happy offenses. So he will have the opportunity to get pressure on the quarterback on a consistent basis. If you haven't seen him play, you're in for a treat in 2012.

Texas DT Brandon Moore: Texas may have struck gold on the JUCO front with Moore and offensive lineman Donald Hawkins. Hawkins should start on the offensive line after an impressive spring, and the 330-pound Moore could make coordinator Manny Diaz's defense even more scary. In spring drills he looked unmovable in the middle of the defense. If he could keep his weight under control and have a productive summer, this Longhorns defense will be dominant because DT was the one position of concern entering the spring. Honorable mention for the 'Horns: quarterback David Ash, who must be consistent in his first full year as a starter.

West Virginia LB Josh Francis: Francis has always been praised for his athleticism, but playing in the complex 3-3-5 defense last season seemed to hold him back a bit, as it often looked like the former JUCO star was overthinking and not reacting. This spring he looked much more comfortable in the 3-4 scheme and could be primed to be the defense's best playmaker. This is a unit that lost some good talent, including first-round pick Bruce Irvin as well as Julian Miller, Keith Tandy and Najee Goode. So head coach Dana Holgorsen will be ecstatic if Francis can have a big impact at the 'Buck' position, a spot that will help him showcase his pass-rushing skills.