Today, as we look ahead to the 2012 college football season, let's take a look at five players who will be on the spot in the Pac-12 throughout the fall.

Stanford WR Ty Montgomery: Former Cardinal quarterback Andrew Luck didn't have many weapons to stretch the field during his time in Palo Alto, so the team relied on a strong run game and incredible depth at tight end. Whoever is the new starting quarterback, either Brett Nottingham or Josh Nunes, will still utilize those luxuries. But the 6-2, 205-pound Montgomery is primed for a breakout year after being a nonfactor most of the time in 2011. However, he had major impacts in the team's biggest contests: against USC, Notre Dame and Oklahoma State, where the true sophomore logged most of his 24 catches for 350 yards and 2 touchdowns. He's a physical receiver with deceiving quickness, and he will bring a new aspect to the Cardinal passing attack.

Cal DE Mustafa Jalil: As a true freshman in 2011, Jalil displayed his athleticism both against the run and defending the pass. He has ideal strength and size, and he will only get better learning from coordinator Clancy Pendergast. The Golden Bears lost two ends to the NFL, so a lot is expected of the 6-2, 300-pound Jalil, especially after his strong spring game performance. This is a big year for Jeff Tedford, who has a team that is capable of taking a step forward in the Pac-12. If quarterback Zach Maynard plays as well as he did in the team's final four games of 2011 while Jalil leads a talented but young defense, the Golden Bears could surprise. 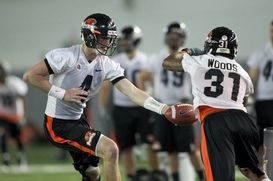 Storm Woods is a versatile RB that could help the Oregon State offense.

Oregon State RB Storm Woods: The Texas running back is competing with fellow redshirt freshman Malcolm Agnew for the starting job, but he possesses the explosiveness and strength to be an every-down back. He needs to work on his blitz pick-up before winning the starting gig, but he can have a nice career with the Beavers if he works on that aspect of his game. Head coach Mike Riley praised him during spring drills, especially because his route running and receiving out of the backfield make him so versatile for this offense.

Oregon WR Rahsaan Vaughn: We already know that the Ducks plan on running the ball with whoever is at quarterback, Bryan Bennett or Marcus Mariota, as well as running backs Kenjon Barner and De'Anthony Thomas. And they will do it very effectively. But expect Chip Kelly to open things up a bit, and he's looking for playmakers at receiver. The senior Vaughn, who transferred from San Mateo Junior College in 2010, admittedly struggled to keep up in the fast-paced offense as he only caught 14 passes for 184 yards and 1 touchdown last fall. And he has stiff competition at the position with Josh Huff, Devon Blackmon, Justin Hoffman and Eric Dungy. However, I think Vaughn is primed to put a subpar 2011 season behind him and become a go-to receiver in this offense.

Arizona QB Matt Scott: Scott saw action in 2010 coming off the bench for Nick Foles, and he played quite well. The 6-3, 195-pounder completed 71 percent of his passes and led the 'Cats to three consecutive October victories. He redshirted last year, and Arizona head coach Rich Rodriguez couldn't be happier because he's the ideal dual-threat signal-caller for this new spread offense. Of course, there will be plenty of ups and downs for this unit because of the new scheme, but Scott's past experience should be of real value.