5 players on the spot in Week 4

Here are five players who will be on the spot Saturday.

And, in case you missed it, check out the NFP Saturday Tailgate for your Week 4 preview.

1. USC LT Max Tuerk: The Trojans will look to bounce back from yet another loss to Stanford when they host a Cal team that outplayed Ohio State last week in Columbus. Anyone who watched even a few minutes of USC's loss last week saw how poorly the left side of the offensive line played. And sophomore left tackle Aundrey Walker was a big part of the line's struggles. Obviously protecting star quarterback Matt Barkley is Lane Kiffin's top priority, so expect the freshman Tuerk to see time at the LT spot this week against the Golden Bears. And he'll have a chance to wrest the starting job away from Walker. The loss of Top 5 NFL Draft pick Matt Kalil has really hampered this Trojans offensive line, as well as the injury to center Khaled Holmes. 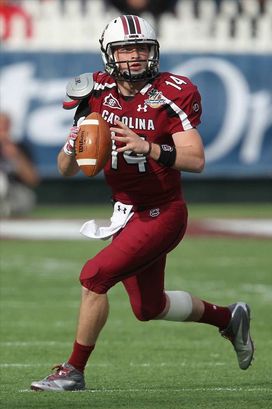 US PRESSWIREWill Connor Shaw be healthy for a full four quarters against Mizzou?

2. South Carolina QB Connor Shaw: We will see just how healthy Shaw's shoulder is this week against a Missouri defense that is physical and underrated, a unit led by tackle Sheldon Richardson. Gamecocks head coach Steve Spurrier expects Shaw to be his usual self and not tentative as he seemed last week against UAB. If he isn't healthy, however, Head Ball Coach maintains that he has confidence in backup Dylan Thompson. While Thompson has proven to be the better passer, he offers the team no run threat. And he has not faced stiff SEC competition yet. Losing Shaw's running ability would be a big hit for this offense, so we'll see how Shaw responds to getting hit against the Tigers.

3. Oklahoma S Tony Jefferson: The Sooners need a healthy Jefferson on defense to contain K-State star dual-threat quarterback Collin Klein. Jefferson has been nursing an ankle injury, so it will be interesting to see just how effective the junior can be Saturday night in Norman. He has reportedly been taking regular reps in practice this week, and that's big because the free safety had a sack and forced a fumble in last year's rout of the Wildcats. He played more of a hybrid linebacker role last year but will likely be a spy on Klein this week.

4. Wisconsin QB Joel Stave: Badgers head coach Bret Bielema has benched Maryland transfer Danny O'Brien in favor of former walk-on Joel Stave in an effort to get increased production from their offense. Wisconsin will host a UTEP team that gave Oklahoma problems in Week 1. The problem for the Badgers is that I don't think O'Brien's play has really been the major concern for this unit. It's been a lack of physicality on the offensive line. Bielema already switched offensive line coaches, but how much better can the redshirt freshman Stave be when the power-running game hasn't been a focus of the offense, which is supposed to be the team's bread and butter? Getting back top receiver Jared Abbrederis will help a unit that ranks 116th nationally in total offense and 113th in scoring.

5. UCLA DE Datone Jones: We all knew about the Bruins' quarterback woes under former head coach Rick Neuheisel. Well, new head coach Jim L. Mora has been the beneficiary of inheriting redshirt freshman Brett Hundley, who is turning into a star. But the UCLA defense was the other major concern for this new staff coming in. It was a unit that just didn't seem to play hard for the old staff. So far this season the veteran Jones has been one of the best defensive playmakers in the Pac-12 as he has led a defensive revival in Westwood. He has two sacks and eight tackles for a loss, including a safety on Taylor Martinez in the win over Nebraska. He will look to make life difficult on Saturday at home against an Oregon State team that beat Wisconsin in its lone game this season.