5 teams that are one year away

As the college football season slowly approaches, let's take a look at five programs that will be intriguing to watch in 2012 but are best positioned to make a jump up the standings in 2013.

Quarterback Braxton Miller will need a full year to fully grasp new head coach Urban Meyer's spread offense, so 2012 will be a building-block campaign for the Buckeyes' offense. He's the prototypical signal-caller for this scheme, and he received valuable playing experience last season so he's used to the bright lights. OSU also needs to develop playmakers, something that the offense sorely lacked in 2011. Players such as Michael Thomas and Corey Brown could help in that capacity. Defensively, Meyer brought in SEC-type linemen this past February in ends Noah Spence and Adolphus Washington. So the defense, coordinated by Luke Fickell and Everett Withers, will be ready to carry the load until Miller and Co. are able to break out offensively. And all expectations are that 2013 is the year when the offense fully comes together. 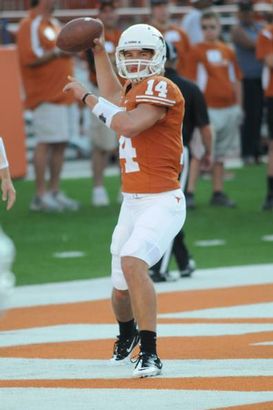 Despite an embarassing loss to Oklahoma in the Red River Rivalry game last season, Mack Brown's Longhorns bounced back nicely from their disastrous 5-7 campaign in 2010. There's no question that there is a lot of momentum building in Austin, and the 'Horns are a popular pick to be a bounceback team this fall. But how high can Texas really soar this season with an offense that's being led by a still-inexperienced quarterback? If David Ash can be consistent for 12 weeks, then it's a different story. But this is a unit that ranked 89th in pass efficiency and 86th in turnovers. Defensively, the 'Horns are ready to compete for a national title under coordinator Manny Diaz, and it's a unit led by ends Jackson Jeffcoat and Alex Okafor. And even if this is their last season in Austin, the pair will have suitable replacements ready to step in. Meanwhile, cornerbacks Carrington Byndom and Quandre Diggs are two of the finest young players in the nation. And they highlight a talented and deep position group in Austin — a group that needs to be strong in the pass-happy Big 12. The good news is that last fall Texas finished in the Top 10 nationally in passing efficiency defense. If Brown can have another solid season, continue to develop his young and talented personnel (especially Ash and the deep backfield of Malcolm Brown, Joe Bergeron and Johnathan Gray) and continue to dismiss questions about his job security, the 'Horns could be primed for big things in 2013.

No matter who is the head coach in South Bend, the pressure is always sky high. And Brian Kelly has known this for awhile now. Defensively, coordinator Bob Diaco has his unit trending in the right direction. Kelly is the first ND coach in a long time who has placed an emphasis on bringing in impact defenders. And that's exactly what he has been able to do during his short tenure. While losing end Aaron Lynch hurts, there is depth up front, and the 2013 class is currently filled with standout linebackers. The next step is to bring in top-notch cornerbacks and safeties. But Diaco, who is a future head coach, has worked wonders with this defense. Offensively, that's where there still might be growing pains this fall. And looking at the schedule, the Irish arguably could be better than they were last season yet not see the results in the standings. It would help if true freshman Gunner Kiel is as good as advertised, but I have argued throughout the offseason that redshirt freshman Everett Golson is the best fit for this offense at quarterback. It will help in 2013 that Oklahoma and USC travel to South Bend after the teams lose Landry Jones and Matt Barkley, respectively.

The Tigers return a boatload of starters from last year's youthful 8-5 squad, but the development of quarterback Kiehl Frazier and a young defense will hold the keys to Auburn's future success. The dual-threat Frazier has the edge for the starting job and could be primed for a big year in coordinator Scot Loeffler's offense in 2013. New defensive coordinator Brian VanGorder should have his unit playing at a high level by the end of this season, but it's a group that should take an even bigger jump in Year 2 — especially with the type of impact talent head coach Gene Chizik has been able to bring in the last few years.

Like Auburn, any Florida team is going to have plenty of talent. But youth at the quarterback position is an issue that could dog the Gators in 2012. The offense was anemic last season under coordinator Charlie Weis, mostly because of injuries to John Brantley and the inexperience of Jacoby Brissett and Jeff Driskel. But this is also a Gators squad that has lacked playmakers the last few seasons. It will be up to new OC Brent Pease to develop the sophomore signal-callers while surrounding them with the right skill players. Defensively, Will Muschamp's squad is in very good shape. Ronald Powell and Dominique Easley are elite when healthy, and Sharrif Floyd returns to his natural position of tackle. Along with junior college transfer Damien Jacobs, the line is dominant. One year of development for Pease's offense is all this team needs for 2013 to be a very fruitful campaign.