Today is the perfect day.

The power of Twitter was revealed once again (#freebruce) and the 2011 college football season is moments away from kicking off.

Let's take a look af five things to watch for tonight as a fresh season gets underway. And check out the full slate of games here.

1. Wilson's Badger debut: Transfer Russell Wilson makes his Wisconsin debut at home against UNLV after starting three seasons at quarterback for NC State. Because it's a nationally televised game and it'll be his first action in a Wisconsin uniform, there could be extra adrenaline in Wilson's veins. If he starts off shaky, look for him to settle down quickly as James White and Montee Ball establish the run. Paul Chryst will put Wilson in a position to succeed early, perhaps with play-actions and rollouts, and the Badgers' offense will be on its way to being fun to watch once again this fall.

Be sure to check out the NFP's Wes Bunting as he breaks down this game from a scout's perspective. 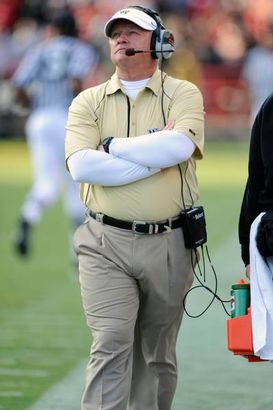 2. The Big East is on display: Okay, so Louisville should take care of Murray State and Rutgers should handle North Carolina Central, but Syracuse faces a test when the Orange host Wake Forest. Doug Marrone took the 'Cuse back to the postseason behind a strong defense in 2010, and his squad will have to be fierce defensively again if back-to-back bowl appearances are going to come into fruition. Meanwhile, Jim Grobe hopes his Demon Deacons have a bounceback season after dealing with quarterback and injury issues in 2010. Wake has an experienced secondary, so Syracuse quarterback Ryan Nassib will have to be on his game, which he was last season as he stabilized the position under center.

3. Utah's first game as a Pac-12 member: One of the more intriguing storylines this season is Utah's first year in a BCS conference. The Utes no longer have to worry about being shut out of the BCS party, as they will have a chance to compete for an automatic berth each year. Could that come in 2011? Perhaps, as I think Kyle Whittingham's squad can deliver a Pac-12 South title in Year One. I do, however, believe they'll fall to the Pac-12 North champ, which should be either Oregon or Stanford. Thursday night, we'll see Norm Chow's new offense battle Montana State at home while fellow Pac-12 South member and division favorite Arizona State hosts UC Davis.

4. Does Kentucky have any offensive weapons?: With Randall Cobb, Chris Matthews and Derrick Locke gone, the Wildcats lost a combined 32 touchdowns from last season. Against Western Kentucky, we'll see whether second-year head coach Joker Phillips has enough offensive playmakers to get back to a bowl game. Running back Raymond Sanders will step in for Locke, but new starting quarterback Morgan Newton will need some weapons to step up at receiver. Defensively, first-year coordinator Rick Minter will bring a variety of looks to create turnovers — a hybrid of 4-3, 3-4 and some 4-2-5. But can the Wildcats get to the quarterback?

5. Is Mississippi State a true contender in the SEC West?: The Bulldogs travel to Memphis in the season opener for Dan Mullen, who begins his third season on the job. Quarterback Chris Relf and the Bulldogs will be a tough “out” every Saturday for SEC opponents, but can they be legitimate contenders in the SEC West? LSU and Alabama are the division favorites, and Arkansas lurks as a true threat after its Sugar Bowl appearance last season. But this Mississippi State offense is getting better and better. Defensively, we'll see how this unit looks without top mind Manny Diaz, who left to run Mack Brown's defense at Texas.