It was the same old story for Texas A&M on Thanksgiving night at Kyle Field against bitter in-state rival Texas.

Build a big lead early and watch the game slip away, particularly in the second half. 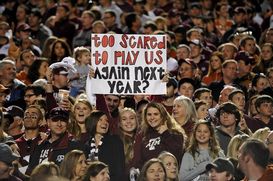 ICONNo one wants to see the Texas-Texas A&M rivalry end.

The Aggies built a 16-7 halftime advantage but were outscored 20-9 after the break, unable to overcome Ryan Tannehill's three interceptions as the Longhorns claimed victory in the 118th meeting between these teams.

A&M will move to the SEC next season, putting one of college football's oldest and most storied rivalries on hold for the foreseeable future.

If you're looking for some reasons why the Aggies have suffered through a 6-6 campaign when expectations were so high, you can cite a lot of things: turnovers, particularly Tannehill's interceptions; mental mistakes in crucial situations; and poor play in the defensive backfield.

But as the Houston Chronicle's Richard Justice pointed out on Twitter, A&M has been outscored 83-0 in the third quarter of their six defeats this fall. And that, no matter how you slice and dice it, ultimately helped prevent the team from meeting its lofty goals for the season.

Will head coach Mike Sherman be back in College Station in 2012 when A&M makes its SEC debut?

As I wrote earlier on Thursday, university president R. Bowen Loftin endorsed Sherman as the leader moving forward. While financial considerations could be the ultimate factor in deciding to bring Sherman back -- A&M will have to pay a large fee when it leaves the Big 12, and Sherman's contract carries a pretty hefty buyout -- a rough debut season in the SEC could prompt Loftin to make a move no matter the cost.