A coaching legend to call it quits

A legend in the coaching ranks has decided to call it a career.

And, no, it isn't Joe Paterno. The face of Penn State football will never stop coaching.

According to Brett McMurphy of CBSSports.com, Florida Atlantic head coach Howard Schnellenberger will step down after this season. News of the 77-year-old veteran's retirement will be made official at a news conference at 4 p.m. ET today. 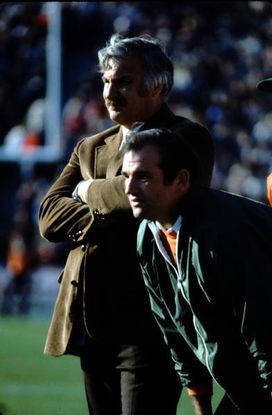 Schnellenberger was the architect of the Owls football program, which began play in 2001 as a member of Division I-AA (now FCS). In 10 seasons at FAU, he compiled a 57-63 mark. However, he captured bowl victories in 2007 and 2008 after moving to Division I-A (now FBS) in 2006. His vision for the program also included a new on-campus stadium, which opens this fall and seats 30,000 fans.

But Schnellenberger is most known for his head-coaching days at Miami (Fla.), where he was hired before the 1979 season. Five years later, he led the Hurricanes to a national championship when they beat No. 1 Nebraska 31-30 in the 1984 Orange Bowl. It was one of the most memorable games in college football history because Cornhuskers head coach Tom Osborne opted to go for the winning two-point conversion instead of an extra point. That point proved to be the difference in the game.

Check out some postgame footage from that fantastic contest.

Schnellenberger left Miami after that season for the USFL, but he never coached a game in that league. He went 41-16 at Miami and came back to the college game to coach 10 seasons at Louisville, where he helped rebuild the Cardinals program. He left for Oklahoma after the 1994 season, but Louisville won two bowl games after his departure and his redevelopment of the UL program helped the administration get a new stadium built.

He lasted just one season in Norman after going 5-5-1 in 1995 before sitting out three years. He then began to lay the foundation for the FAU program in 1998.