A more mature DGB is ready for the SEC

When Dorial Green-Beckham arrived at Missouri, the top player in the Class of 2012 was expected to make an immediate impact for the Tigers as they began play in their first season in the SEC.

But in his first five contests as a true freshman, he recorded just seven catches and one touchdown, although it was an 80-yard score in which he displayed his game-breaking ability. However, his slow start hit another speed bump when he was suspended for a game after he and two teammates were arrested on charges of marijuana possession. 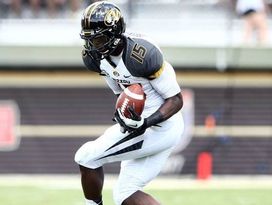 US PRESSWIREDorial Green-Beckham is poised for a breakout sophomore campaign.

The in-state product was struggling to adapt to major-college football after setting a national high school record of 6,353 receiving yards and 75 touchdowns, including 119 catches and 24 touchdowns as a senior.

However, DGB was a different player when he returned to the field against Kentucky on October 27. He caught seven passes in the win over the Wildcats and six in the next contest against Florida, and he would have his best game yet in Mizzou's thrilling overtime victory at Tennessee, where both of his catches went for scores. The 6-6, 220-pounder had four touchdowns in his final three games of his freshman campaign, showing flashes of brilliance along the way. He finished 2012 with 28 receptions for 395 yards and five scores.

Now, bigger things are expected for a player who was considered the closest thing to Calvin Johnson and Randy Moss in college football when he signed with the Tigers.

“He’s a different guy [now],” Pinkel told The Associated Press. “He catches the ball so well, he can turn an average play into a big play, and I think we’re starting to see really how good he can be.

“He can be a lot better than what we’re seeing right now. You take all summer, and then all August. We should see a considerably different guy than we saw a year ago.”

In the team's annual Black and Gold spring game last month, Green-Beckham only had three catches for 49 yards, but his 35-yard catch and run across the middle showed just how difficult of a matchup he can be against smaller defenders. And because of his frame, he is a mismatch for nearly every one.

The biggest test for DGB will be to harness his talent and be consistent with it on a down-to-down basis. Consistency is the biggest issue for any young player, so voluntary workouts with teammates this summer will be crucial for his continued development heading into preseason camp.

The development of Green-Beckham will be huge for an offense that is still searching for a dependable starting quarterback. Senior James Franklin is coming off of a disappointing, injury-plagued year and is looking to outlast challengers Maty Mauk and Corbin Berkstresser to keep his starting job.

But no matter who is the signal-caller, he will have a unique weapon to throw to in DGB.