A new era on The Farm

Of all the first-year head coaches in the Football Bowl Subdivision in 2011, the spotlight will shine the brightest on Stanford’s David Shaw.

While Will Muschamp certainly has his hands full getting Florida back to its winning ways and other new leaders look to rebuild programs which have fallen on hard times, it’s Shaw who has the difficult task of keeping a well-oiled machine running smoothly with a quarterback who is the preseason favorite for the Heisman Trophy. And the 38-year-old former Cardinal receiver just so happens to be following a coach in Jim Harbaugh who was the object of affection for many NFL general managers looking for a new face of the franchise — including those who didn’t even have a head-coaching vacancy.

ICONAndrew Luck returns after finishing as a finalist for the Heisman Trophy last year.

But that’s the situation Shaw faces in Palo Alto in midst of his first spring practice as the leader of the Cardinal.

It certainly helps his transition to have a potential No. 1 draft pick under center. Andrew Luck, who elected to return to school despite being discussed as the top pick in April’s draft, will lead an offense that put up staggering numbers last fall. The 6-4, 235-pounder completed over 70 percent of his passes for 3,338 yards and 32 touchdowns against just eight interceptions. He was only sacked six times — partly because of great line play, partly because he is athletic and has great pocket presence — as he commanded a unit that ranked ninth nationally in scoring at 40.3 points per game.

Even more impressive was a rushing attack that did not skip a beat after losing Heisman Trophy finalist Toby Gerhart to the NFL. Shaw’s biggest role on the offense as an assistant was coaching the running backs, which he did a great job of in 2010. Five rushers — Stepfan Taylor, Anthony Wilkerson, Tyler Gaffney, Usua Amanam and Jeremy Stewart — combined to gain 2,063 yards on the ground in 13 games, an average of 158.6 yards per contest.

Stanford’s offense became must-see TV every Saturday, and it helped propel the squad to an 11-1 regular season and an almost effortless win over Virginia Tech in the Orange Bowl.

But perhaps the most underrated unit in all of college football last season was the Cardinal defense, which was led by Vic Fangio, who was brought in by Harbaugh because of his vast experience at the NFL level. In his only season in Palo Alto, Stanford pitched three shutouts in conference play as the entire unit bought into Fangio’s complicated scheme.

But the veteran defensive coordinator, as well as former associate head coach Greg Roman, departed for San Francisco with Harbaugh. Shaw, who was the offensive coordinator since 2007 but did not call the plays, must be able to oversee the development of new relationships between his players and coaches throughout the spring and summer because both Fangio and Shaw were instrumental in the team’s success the last few seasons. While Fangio rebuilt a defense that ranked 90th in the country in '09, Roman had a hand in many of the team’s formations and blocking schemes on offense the least two seasons. 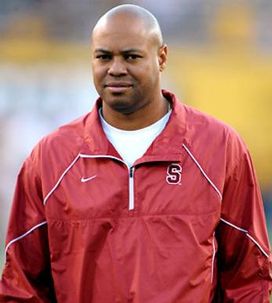 Getting his new coaching staff familiar with the roster will be one of the most critical aspects of spring practice, which began its first portion on February 21 and will conclude on Saturday. The second part begins on March 28 before concluding with the annual Cardinal and White scrimmage on April 9 at Kezar Stadium in San Francisco.

Just a few weeks ago, Shaw hired former New York Jets assistant offensive coordinator Mike Bloomgren as the offensive line/running game coordinator. Former Boise State quarterback Mike Sanford was hired earlier in the offseason to handle Shaw’s old job of coaching the running backs. While some roles have yet to be determined on the staff, Shaw said offensive play-calling will be shared by Pep Hamilton, who’s in charge of the passing game, Bloomgren and Shaw himself, who has the power to veto as the head coach.

In terms of the players on the field, the competition to replace three starters on the steady offensive line began in earnest at the start of spring drills. Derek Hall, Andrew Phillips and Chase Beeler are all gone, with the biggest question being who will replace the All-American Beeler, the center who called the protections and run schemes. Sophomores Sam Schwartzstein and Khalil Wilkes are the leading contenders.

Of course, continuing to play with confidence and the right attitude remains at the forefront on The Farm, especially with Harbaugh — so adamant about being mentally and physically prepared — no longer running the show. Shaw knows that winning isn’t always about talent, especially at Stanford. That’s why Harbaugh’s tenure was so special. The talent was good, but the mental and physical toughness sparked the rise of the program. Can Shaw maintain that make-up and focus as the team transitions into a new era?