Now that the 2013 NFL Draft is in the rearview mirror, let's take a look ahead to some of the bigger names that could comprise the early rounds of the 2014 draft next April.

Since I cover college football for the National Football Post and because there are 32 first-round picks each year in the NFL Draft, I present to you 32 of the best college football players in America who in my opinion will be at the top of many NFL teams' draft boards next April.

Note: Many players listed are underclassmen but will almost certainly have to consider declaring for next year's draft. Also, reigning Heisman Trophy winner Johnny Manziel is not on this list because it is difficult to envision his game translating well to the NFL — right now. I believe that Manziel will continue to improve as a passer, but accomplished NFL scouts are more qualified to give their thoughts on the Texas A&M dual-threat QB as a pro prospect.

1. South Carolina DE Jadeveon Clowney: The most dominant defender in college football, Clowney possesses a rare combination of strength and athleticism. The pass rusher could make an impact in the league right now. 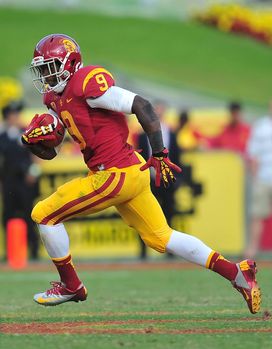 US PRESSWIREMarqise Lee's playmaking ability will be coveted by NFL teams next April.

2. USC WR Marqise Lee: The best offensive player in college football that's not a QB has great speed and very good hands. His playmaking ability will be coveted by NFL GMs.

3. Texas A&M OT Jake Matthews: The son of NFL Hall of Famer Bruce Matthews, the Aggies standout will get even more attention now that Luke Joeckel has left College Station. He may even be able to get drafted ahead of a quarterback depending on which teams are selecting in the top five.

4. Notre Dame DL Stephon Tuitt: The strength of the Fighting Irish defense is their front, led by Tuitt. The end has great quickness, continues to get stronger and will be even more dominant once he refines his technique.

5. Michigan OT Taylor Lewan: There was talk that the longtime Wolverines starter could have been a Top 15 pick this season if he decided to leave school early, but the left tackle could be in for an even higher selection next year if he stays healthy.

6. Louisville QB Teddy Bridgewater: The Cardinals have a chance to go back to a BCS bowl game because of one player: their quarterback, who has very good arm strength and accuracy.

7. Alabama QB AJ McCarron: There are still some college football fans that consider the Crimson Tide signal-caller more of a game-manager, but that couldn't be further from the truth. He can make all of the NFL throws and offensive coordinator Doug Nussmeier will continue to open up the offense despite it being a run-first operation.

8. BYU OLB Kyle Van Noy: Detroit Lions No. 5 pick Ziggy Ansah may have received most of the attention last season, but Van Noy at times was a one-man show for the Cougars. He is a strong pass rusher who will contribute right away.

9. Clemson QB Tajh Boyd: The dual-threat signal-caller threw for 346 yards and recorded three touchdowns against a very good LSU team in the Chick-fil-A Bowl to close out last season. He is poised for a third straight productive year under offensive coordinator Chad Morris and is the type of quarterback that NFL GMs are craving more and more as offenses open up.

10. Alabama LB C.J. Mosley: The Crimson Tide defender is a tackling machine who is very good in pass coverage. And he stars for a Nick Saban defense. Enough said.

11. Ohio State CB Bradley Roby: The star Buckeye doesn't have great size, but he has elite speed and is a nightmare for even the best of receivers.

12. Georgia QB Aaron Murray: The veteran Bulldogs starting signal-caller surprised a lot of people when he decided to return to Athens for his senior season. The pocket passer shows good touch on his throws and is very accurate, but he lacks a big arm.

13. UCLA OLB Anthony Barr: The former running back moved to defense last spring and promptly finished 2012 with 13.5 sacks and 21.5 tackles for loss. The sky is the limit for the Bruin.

14. USC DE Morgan Breslin: After arriving from junior college, Breslin notched 13 sacks and 19.5 tackles for loss. And we all know that pass rushers come at a premium.

15. Arizona State DT Will Sutton: He is undersized for a DT, but it's tough to overlook him because he is seemingly always around the football. He gets off the ball quickly as evidenced by his 23.5 tackles for loss in 2012.

16. Clemson WR Sammy Watkins: The Tigers will be relying on Watkins to bounce back from a disappointing sophomore season marred by injuries and off-the-field issues. If he is healthy and focused, he is one of the most electrifying and productive players in the country with great speed and vision. Keep in mind that as a freshman he had 82 receptions for 1,219 yards and 12 touchdowns.

17. Texas DE Jackson Jeffcoat: The Longhorns welcome back a top defender who suffered a season-ending injury last season. The explosive pass rusher is a key to Manny Diaz's defense looking to rebound from a tough 2012.

18. Notre Dame DT Louis Nix III: The massive Fighting Irish defensive lineman has good athleticism for his size, which helps him beat blockers off the ball. The nose tackle may even be able to play end in a 3-4 scheme.

19. UCLA QB Brett Hundley: I wonder if Rick Neuheisel would still be coaching the Bruins had Hundley not been redshirted in 2011. The dual-threat signal-caller threw for 3,745 yards and recorded 38 total touchdowns last year and is primed to possibly improve on those numbers. 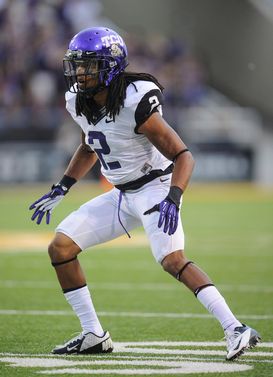 21. Washington TE Austin Seferian-Jenkins: We have to keep an eye on the Huskies offensive star because he is currently suspended following a DUI arrest. But he can find himself in the first round like Tyler Eifert this past season because he has a unique blend of size and athleticism.

22. Alabama OT Cyrus Kouandjio: Kouandjio was the starting left tackle for Alabama’s national championship team last season, and he could be poised to land in the Top 10 with another strong season — especially now that he is one of the veterans of the line.

23. Oregon CB Ifo Ekpre-Olomu: Nick Aliotti's defense never seems to get enough credit because of the prolific nature of the Ducks offense, but Ekpre-Olomu had four interceptions and knocked down 20 passes last season.

24. Florida State LB Christian Jones: The Seminoles defender recorded 95 tackles last season as he displayed a real gift for getting into the backfiel d. His run defense is his strength but he could primed to move up draft boards because he has the speed to play well in pass coverage as well.

25. Arizona RB Ka'Deem Carey: The Wildcats star offensive performer led the nation in rushing last season with 1,929 yards (nearly 150 yards per game), so all eyes will be on whether he can perform as well as a junior.

26. Alabama OLB Adrian Hubbard: Hubbard will get a chance this season to show NFL scouts that he can be a more accomplished pass rusher. But we already know he has the strength and quickness to play on Sundays.

27. Stanford OT David Yankey: The Cardinal offensive lineman moved from guard to tackle last season and showed that he can play both positions well. He's versatile and may make more sense inside at the next level.

28. Oklahoma CB Aaron Colvin: I like Colvin because he has shown that he can play both corner and safety and be effective. He had four interceptions last season for the Sooners.

30. San Jose State QB David Fales: While he doesn't have the strongest of arms, he has very good vision and touch on his throws and is very accurate.

31. Oregon RB De'Anthony Thomas: With Tavon Austin getting drafted high by St. Louis, there's no question there is room for the track star to move up draft boards because he is a big play waiting to happen every time he touches the football. This is a big year for him in the Oregon offense with Kenjon Barner moving on.

32. Florida DL Dominique Easley: With Sharrif Floyd gone, the Gators are counting on Easley to have a big season. He led the Gators in sacks with four in 2012 and can line up anywhere on the line.