With the start of the 2013 college football season just a few days away, let's take a look at some power rankings for the ACC.

1. Clemson: Dual-threat quarterback Tajh Boyd will continue to put up big numbers in this offense, but all eyes will be on coordinator Brent Venables as he tries to get continued improvement from the Tigers defense. I give the top honor to the Tigers because they get Florida State at home.

2. Florida State: Playmakers abound on offense, and the defense should still be strong despite losing coordinator Mark Stoops to Kentucky and some top talent to the next level. But will the 'Noles trip up along the way against an inferior opponent as has been the case in recent years? 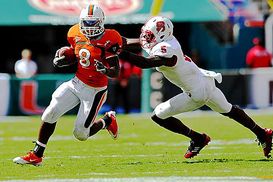 US PRESSWIREDuke Johnson and the 'Canes are one of the most dangerous teams in the country.

3. Miami (FL): Veteran quarterback Stephen Morris could be primed for a huge year, and running back/returner Duke Johnson is a star playmaker as well. The major concern is the defense, though. A ton of starters return, but it was a unit that gave up a lot of big plays in 2012.

4. North Carolina: The Tar Heels will score plenty of points in a Larry Fedora offense that features quarterback Bryn Renner, receiver Quinshad Davis and tailbacks Romar Morris and A.J. Blue. The question is whether UNC will be strong enough along both lines.

5. Georgia Tech: The Yellow Jackets' strong rushing attack paces the offense, and that unit should actually get help from its defense this year as new coordinator Ted Roof made quite the impression this spring.

6. Virginia Tech: I don't have any doubt that quarterback Logan Thomas will be improved under new coordinator Scot Loeffler, but how much help will the dual-threat QB get from his supporting cast? Defensively, this is a group that is ready to resemble the typical Bud Foster unit that we did not see last fall.

7. Maryland: Quarterback C.J. Brown is back, and Stefon Diggs and Deon Long will provide quality options at receiver. But can the rushing defense play well enough to help get the Terps to the postseason?

8. Wake Forest: The Demon Deacons have a lot of veteran talent, and the hope is that they can put their injury-riddled 2012 season behind them. There are nice pieces on offense, but the offensive line needs to better protect quarterback Tanner Price. Defensively, the line is deep and the linebackers should be the strength of the unit.

9. Pitt: The Panthers debut in the ACC this fall and will need Tom Savage, Devin Street and the passing attack to be sound in case the run game experiences growing pains. The Panthers will be stout defensively, but they need to be better on third down.

10. Syracuse: Oklahoma transfer Drew Allen has reportedly been very impressive since his arrival on campus, but he has yet to win the starting quarterback job. Meanwhile, linebackers Marquis Spruill and Dyshawn Davis lead a defense that should be solid for first-year head coach Scott Shafer.

11. Duke: Fans of the Blue Devils should be excited about quarterback Anthony Boone, who takes over the offense. He is primed to excel under David Cutcliffe. But can Duke's defense improve enough to take the program to another postseason game?

12. NC State: New Wolfpack head coach Dave Doeren and his staff will win sooner rather than later in Raleigh, but it may take some time before the up-tempo offense catches on.

13. Virginia: The Cavaliers turn to David Watford at quarterback with the ground game remaining a concern. Can head coach Mike London stabilize a program he had trending upward in 2011?

14. Boston College: Steve Addazio has taken over in Chestnut Hill, and he has a lot of work to do to get the Eagles out of the ACC cellar. Quarterback Chase Rettig does return, but the run game is a major concern.