Today at the NFP marks the first of seven pre-spring conference power rankings, beginning with the ACC.

1. Florida State: The Seminoles did not live up to the lofty expectations placed upon them nationally last fall. After playing Oklahoma tough at home, Jimbo Fisher’s squad never recovered from the early season loss. Now the hope is that nine returning starters on defense will help out veteran quarterback EJ Manuel. Another top recruiting class will help, but the ‘Noles need to find some semblance of a running game and consistently protect their QB. 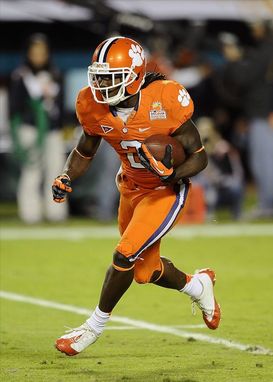 ICONWhat does Sammy Watkins have in store for his sophomore campaign?

2. Clemson: With quarterback Tajh Boyd and wide receiver Sammy Watkins, the offense will continue to be prolific under second-year coordinator Chad Morris. The defense needs to improve under new coordinator Brent Venables, however, after its embarrassing Orange Bowl performance against West Virginia.

3. Virginia Tech: The Hokies come in behind Clemson because of the two wins that Dabo Swinney’s team had against Frank Beamer in 2011. The offensive line will lose several key starters, and star running back David Wilson needs to be replaced. But quarterback Logan Thomas had a fantastic second half of the season. He is primed for a huge season in his second year as the starter in Blacksburg.

4. Georgia Tech: I’m going out on a limb with Paul Johnson’s Yellow Jackets after they once again failed to deliver the former Navy head coach a postseason victory, falling to Utah in the Sun Bowl. But a good portion of the roster returns, although a replacement needs to be found for future NFL draftee Stephen Hill at receiver. The experienced offensive line will lead a sound rushing attack, but Al Groh’s defense will need to continue to make strides if this team is going to contend for a Coastal division crown.

5. Virginia: Mike London had the Cavaliers vying for a division title deep into the season, so the expectations are high as the head coach enters his third year in Charlottesville. While the Hoos lose a lot of experience in their secondary, true sophomore Demetrious Nicholson will be leaned upon to lead a real green unit. And the defense overall has to replace seven starters. Offensively, can quarterback Michael Rocco find his talented receivers on a consistent basis?

6. N.C. State: Veteran head coach Tom O’Brien navigated his team through an up-and-down season in 2011 but finished strong, ending the year on a three-game roll including wins over Clemson and a bowl victory over Louisville. Quarterback Mike Glennon cut down on his interceptions late in the year, but the Wolfpack need Mustafa Greene or someone else emerge to improve on a rushing attack that ranked No. 109 in the country last fall.

7. Wake Forest: Jim Grobe had the Demon Deacons in position to claim the Atlantic division crown last season, and quarterback Tanner Price has the veteran savvy to help them compete once again. However, four starters on the offensive line must be replaced, and running back Josh Harris must stay healthy. Replacing stud receiver Chris Givens will be difficult.

8. North Carolina: New head coach Larry Fedora will need to find some quality replacements on the defensive side of the ball, a unit that will switch to a 4-2-5 scheme. Look for the Tar Heels this spring to zero in on athletes who can play that safety/linebacker hybrid role. Offensively, four starters return up front, and quarterback Bryn Renner is healthy after playing well with bone spurs in his ankle last season.

9. Miami: Al Golden has to be still riding the high of his standout recruiting class brought in earlier this month. But how will the Hurricanes fare on the field with NCAA sanctions looming? Early departures for the NFL Draft certainly will hurt the team’s fortunes in 2012, and replacing eight starters on offense — including leading rusher Lamar Miller — will be difficult. Keep an eye on the quarterback battle between Stephen Morris and Memphis transfer Ryan Williams.

10. Maryland: Could last season have gone any worse for Randy Edsall, who just a year ago took UConn to a BCS bowl game? Hiring Mike Locksley as offensive coordinator should help on the recruiting front, but can C.J. Brown consistently deliver quality efforts at quarterback? And how much will the off-the-field turmoil affect the entire program?

11. Boston College: Doug Martin becomes the team’s fifth offensive coordinator in as many seasons, and it won’t be easy generating yards and points if running back Montel Harris continues to be plagued by his knee issue, especially with Martin hoping to install a more physical rushing attack along with some up-tempo no-huddle looks. Defensively, can Steele Divitto replace the leadership and outstanding play of Luke Kuechly?

12. Duke: David Cutcliffe has yet to elevate the Blue Devils program to minor bowl status, and it will be up to second-year coordinator Jim Knowles to get the defense to make strides in the 4-2-5 scheme. Top safety Matt Daniels is gone, so safety Lee Butler, end Kenny Anunike and linebacker Kelby Brown must lead this unit.