Denard Robinson helped Michigan end a school-record seven-game losing streak to Ohio State on Saturday, as the dual-threat quarterback's five touchdowns led the Wolverines to a 40-34 victory over the Buckeyes at Michigan Stadium.

It had been 2,926 days since Michigan fans enjoyed a victory over their rivals from the state of Ohio. 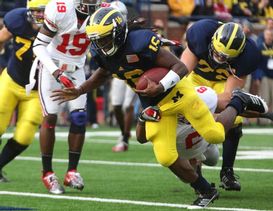 Denard Robinson accounted for five touchdowns in Michigan's win over Ohio State at the Big House.

The Wolverines (10-2, 6-2 Big Ten) and the Buckeyes (6-6, 3-5) went back and forth all game long, exchanging leads throughout and capitalizing on surprisingly porous defenses. With Brady Hoke's squad driving late and looking to ice the game with six points, two apparent touchdowns were negated by a video review and then penalties. So Michigan was forced to settle for a six-point lead on Brendan Gibbons' career-long 43-yard field goal with 1:59 left.

Luke Fickell's team had a chance to put together a game-winning drive, but freshman quarterback Braxton Miller overthrew DeVier Posey down the sideline on what likely would have been a 76-yard score. Miller then threw an interception on fourth down to Wolverines defender Courtney Avery after spiking the ball on 3rd and 6.

While Miller played as good as a freshman could have in this rivalry game, specifically using his legs to avoid the rush and pick up yards on the ground, "Shoelace" was the difference in this one.

With the win, the Wolverines stayed alive for a potential BCS at-large berth, likely a spot in the Sugar Bowl against Houston if the Cougars continue to take care of business in Conference USA.