Let’s take a look back at some of the highlights from the first weekend of the season. And, in case you missed it earlier today, check out the latest edition of the NFP Top 25.

• Alabama remains at the top of its game. Despite all of the talk that the Crimson Tide's defense would take a step back because of the losses of top players Mark Barron, Dre Kirkpatrick, Dont'a Hightower, Courtney Upshaw and Josh Chapman, new faces emerged on Nick Saban's defense Saturday night against Michigan to give fans hope that the unit will be as stout as ever. Linebackers Trey DePriest, C.J. Mosley, Nico Johnson as well as cornerback Dee Milliner stepped up and started to assert themselves as the new stars of what will once again be a dominant defense. And running backs T.J. Yeldon, Eddie Lacy and Jalston Fowler combined to lead a strong rushing attack against the Wolverines, helping soothe the fans who worried about the loss of Heisman Trophy finalist Trent Richardson. It was a thoroughly dominant effort from 'Bama, and all eyes will now turn to the September 15 road matchup with Arkansas. The scariest aspect of this team, which jumped out to a 31-0 lead against the Maize and Blue, is the fact that this offense seemed much more aggressive under new offensive coordinator Doug Nussmeier, who took over for Jim McElwain after he accepted the head job at Colorado State. 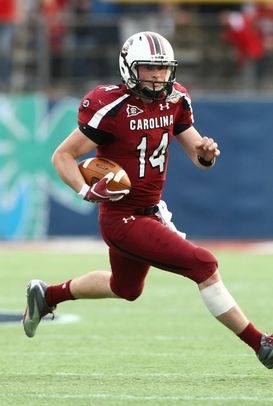 US PRESSWIREThe health of QB Connor Shaw will be crucial to South Carolina's SEC chances.

• Can Connor Shaw remain healthy for a full season? That's a legitimate question that South Carolina head coach Steve Spurrier has to be asking himself right now after the Gamecocks' offense went nowhere when Shaw was on the sideline last Thursday night in the close win at Vanderbilt. The Gamecocks are not the same team without Shaw on the field, as they lose the run threat and the improving passing game that he brings to the table. Carolina can be a good team with a strong defense and the run game led by Marcus Lattimore, but it can't win the SEC East without Shaw, who needs to do a better job of protecting his body when he slides to the turf after a run.

• Thomas will be just fine. If you follow a college football game along on Twitter, you already know that overreactions to plays, players, coaches and teams in general are aplenty. That was no different on Monday night, when many wondered why Virginia Tech quarterback Logan Thomas was being showered with love by NFL Draft analysts, especially as the monstrous dual-threat signal-caller struggled to find his rhythm against Georgia Tech in an ACC Coastal division matchup. But we have to keep in mind that the Hokies were reloading on the offensive line and at receiver, and Michael Holmes was being broken in as the No. 1 running back. It may have been an ugly offensive showing, but Thomas made big plays when it counted. And he was doing it against an inspired Al Groh-led Yellow Jackets defense. Thomas remains one of the more intriguing pro prospects, and he's the reason why Frank Beamer's squad can win the ACC this fall.

• Can we fast-forward to November 3? The Oregon-USC contest at The Coliseum on the first Saturday of November should be quite an offensive showcase. Marcus Mariota looked like a battle-tested veteran in his debut as the Ducks' starting quarterback against Arkansas State, while Matt Barkley picked up where he left off from last year in the Trojans' opening contest against Hawaii. While I don't love USC's defensive line, I'm not sure if Oregon's undersized defense is a great matchup against the 'SC offense. Expect a lot of points in that showdown -- and for the scoring to continue in a likely Pac-12 title game rematch. The question is whether the two teams will knock each other out of BCS national title consideration.

CONTINUE TO PAGE 2 FOR MORE AFTER FURTHER REVIEW: WEEK 1