This past weekend caused a shakeup in the latest NFP Top 25. Let’s take a look back at some of the highlights from a wild third weekend of the season.

These aren’t your older brother’s Buckeyes. Could Ohio State have received worse play from the quarterback position against Miami down in South Beach on Saturday night? The Buckeyes offense doesn’t have the same speed we’re used to seeing, and it’s not even completely due to the absence of receiver DeVier Posey. Jordan Hall’s return didn’t even help the Buckeyes in their 24-6 loss to the Hurricanes. I just didn’t see any playmakers for Luke Fickell’s squad, which didn’t exactly help Joe Bauserman and Braxton Miller. Still, the duo combined to go 4 of 18 through the air for 35 yards, and the four completions matched the program’s worst total for any game in the last 15 years. We’ll see what happens when Posey and running back Boom Herron return, but will it make much of a difference? Not a great omen for Fickell, whose tenure could last just one season if we see any similar performances in the future. 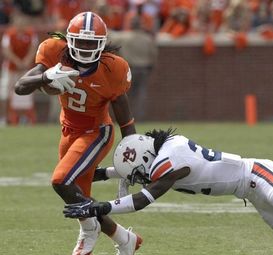 Sammy Watkins has helped give life to the Clemson offense.

Clemson breaks through against the defending champs. A huge win for Dabo Swinney this past weekend, as his Clemson squad took care of defending national champion Auburn. The Tigers really struggled offensively last season, but their new up-tempo offense finally clicked against a very generous Auburn defense. Swinney’s work on the recruiting trail this past offseason is really paying off as freshman receiver Sammy Watkins is having perhaps as much impact as any first-year player in the country. He had touchdown catches of 65 and 19 yards and finished with 10 catches for 155 yards — both freshman Clemson records. New coordinator Chad Morris, who is good friends of Auburn’s offensive wizard Gus Malzahn, is getting good play from quarterback Tajh Boyd, who completed 30 of 42 passes for 386 yards and four touchdowns. The Tigers are certainly a team to watch because it has a lot of talent. The question was whether they would be able to put it together and mature offensively. They took a big step on Saturday against Gene Chizik’s squad.

Are Houston Nutt and Rick Neuheisel already on the way out? No question about it, the 30-7 loss to Vanderbilt is an absolutely crushing blow for the bowl hopes of Ole Miss—and potentially a death blow to Nutt’s job status. James Franklin is doing wonderful things at Vanderbilt, but it’s an inexcusable loss for Nutt. He has serious issues under center, and even the loss to BYU on opening weekend looks worse and worse as the Cougars continued to struggle this weekend in the Holy War against Utah. Meanwhile, UCLA continues to have issues with its signal-callers, and the Bruins’ 49-20 loss to Texas at the Rose Bowl doesn’t give their fans much hope this season. As an SEC head coach, Nutt can’t afford losses like Saturday. And even an offseason upheaval of his staff can’t seem to help Neuheisel turn things around in Westwood. We’re not even in October yet, so it can be a long season for these two programs. You may have to add Arizona to that list as well after its 37-10 loss to Stanford. Another terrible effort by the Wildcats against a superior opponent, and Mike Stoops hasn’t been able to get consistent effort from his players as the expectations for the program have risen.

Speaking of the Holy War…Seven turnovers for BYU? The Cougars were rolled 54-10 by Utah, and that’s a huge win for the Utes following their loss to USC. What is wrong with Bronco Mendenhall’s offense in Provo?

Landry Jones came up big. The Oklahoma quarterback was taking a little heat for his record on the road — 3-5 as a starter the past two seasons in true road games — but the Sooner came up big when it mattered. Despite throwing two interceptions, Jones finished 18 of 27 for 199 yards and became the school’s career passing leader, moving past Heisman Trophy winner Sam Bradford. But the big play was his 37-yard touchdown pass to Kenny Stills midway through the fourth quarter for the tiebreaking score. It was a big drive for Jones and OU. The BCS national championship game remains a distinct possibility after the Sooners passed a big road test. 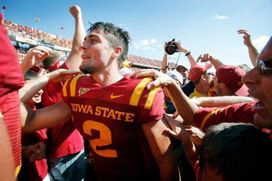 Steele Jantz and the Cyclones are the talk of Iowa as they remained undefeated with their win over UConn.

• Iowa State quarterback Steele Jantz may not look pretty doing it, but he gets the job done. He settled down after throwing interceptions on three of his first four passes, but his 20-yard touchdown pass with about 9 minutes to play Friday night against UConn helped the Cyclones remain undefeated.

• West Virginia’s inability to play a full, clean 60-minute game is confounding. The Mountaineers get the NFP’s top-rated team, LSU, this week. I don’t think Dana Holgorsen will have to worry about his team’s focus for that one.

• We always knew Georgia Tech could run, but the Yellow Jackets actually have a passing weapon now in Tevin Washington. The junior signal-caller has thrown for 637 yards and seven touchdowns against no interceptions on just 28 pass attempts, and Stephen Hill is a solid threat at receiver for the Ramblin’ Wreck. Does Paul Johnson have his team back in Orange Bowl form after a down year in 2010?

• Kudos to Ron Zook and Illinois. With the win over Arizona State, the Fighting Illini showed that they can be a real factor in the Big Ten race this year if they get inspired play from Vic Koenning’s defense.

• You need a head coach for your football team? You can do a lot worse than Navy’s Ken Niumatalolo, who nearly delivered a big win over South Carolina in Columbia on Saturday night.