Week 4 of the 2013 college football season is in the books, so let’s take a look back at some of the highlights from the fourth weekend of the season.

This past Saturday didn't exactly feature the most competitive or intriguing slate of games, but here are my biggest takeways from the weekend's action.

• What exactly do we make of Michigan? The chatter out of Ann Arbor throughout the offseason was that Devin Gardner was poised for a monster season entering his first full year as the starting quarterback. But the athletic signal-caller has really struggled operating the Al Borges offense since his huge game against Notre Dame in Week 2. His play against Akron last week and UConn Saturday was below average, as he struggled with his accuracy and tossed five interceptions. He also had a fumble that was run back by the Huskies that put Michigan in a two-touchdown hole, which was his second lost fumble in as many weeks. The Wolverines are off this week, so Brady Hoke's squad will have extra time to figure out why the offense seems to be in a funk. Falling behind early is not a recipe for success as the schedule gets more difficult moving forward. 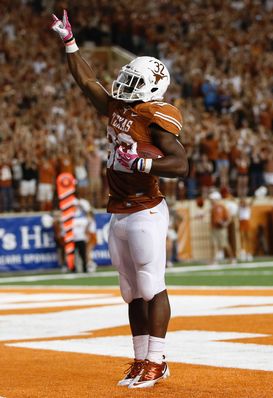 US PRESSWIREJohnathan Gray rushed for 141 yards and two touchdowns against K-State.

• Texas recorded a desperately needed win by knocking off Kansas State, and the much-maligned Longhorns defense played a big part in the victory. Greg Robinson's revived unit really slowed the Wildcats' ground game, as Bill Snyder's offense recorded just 115 yards on 38 carries. Of course, we saw just how porous the Longhorns' run defense was the previous two weeks against BYU and Ole Miss. The 'Horns were also able to force three second-half turnovers in the win, which was big for the Big 12 race. Johnathan Gray rushed for 141 yards and two touchdowns to pace the ground attack, and he became Texas' first 100-yard rusher of the season. The win snapped a five-game losing streak to the Wildcats, but it came at a price for Texas. Quarterback David Ash, who missed the previous game with concussion-like symptoms, missed the second half with a new head injury. Case McCoy led two touchdown drives, but Ash could be gone for the foreseeable future. Mack Brown's squad may need to rely on its rushing attack and a rejuvenated defense to be in the Big 12 race all season.

• Jeff Driskel's injury is really devastating for Florida, as the Gators' second-year starting quarterback was lost for the season when he broke his fibula in the win over Tennessee. Tyler Murphy will now have to run the offense for Will Muschamp and Co. for the first time in his Gators career after being buried on the depth chart the last three years. He considered transferring and never wanted to change positions, and he now is finally the No. 1 QB in Gainesville. But while Driskel had a rough outing against Miami (FL) a few weeks ago, his experience was invaluable and was clearly the leader of the offense. The Gators forced six turnovers on Saturday, so defense and special teams will be leaned on with Murphy's inexperience against a brutal upcoming schedule. But as good as those two areas are for Muschamp's squad, will that be enough to beat teams such as Georgia, LSU, South Carolina and Florida State? Meanwhile, Tennessee redshirt freshman Nathan Peterman made his first career start on the road and had a disastrous outing for the Vols. He had three turnovers in a 17-minute span in the first half and was benched after completing 4 of 11 passes for five yards with two interceptions and a fumble.

• Stanford was extremely impressive in its win over Arizona State, as the Cardinal jumped out to a 39-7 lead en route to a 42-28 win in a game that was nowhere near as close as the final score indicated. Kevin Hogan was efficient through the air and remains undefeated as a starter, Tyler Gaffney paced the rushing attack and the Cardinal also received strong play on special teams. The defense also forced at least one turnover for the 27th straight game. The defending Pac-12 champs forced two interceptions, blocked two punts and recorded three sacks while constantly getting into the Sun Devils' backfield. While ASU quarterback Taylor Kelly threw for 367 yards, including three touchdowns in the fourth quarter, he also had 25 incompletions as he struggled with efficiency for the second straight week. It doesn't appear that ASU is quite ready to take the next step as a program in Todd Graham's second season.

• Maryland and West Virginia are going in entirely different directions following the Terrapins' dominant 37-0 win over the Mountaineers. Randy Edsall's defense forced six turnovers, led by A.J. Hendy's interception return for a score and two recovered fumbles, and held Dana Holgorsen's offense to just 175 yards en route to ending a seven-game losing streak against WVU. The Terps are unbeaten, putting the early struggles of Edsall in College Park in the rearview mirror. They have a bye next weekend before opening their final ACC season at Florida State. Meanwhile, Holgorsen is just 4-8 in his last 12 games. While the 'Neers are essentially rebuilding, not much effort appears to have been made in bringing in better defensive talent during Holgorsen's tenure. And he has not been able to field a prolific offense this year to offset any defensive deficiencies. 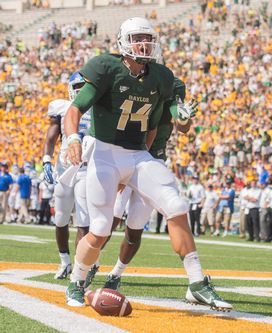 US PRESSWIREBryce Petty and the Bears are rolling.

• Baylor annihilated Louisiana-Monroe 70-7 one week after Todd Berry's Warhawks beat Wake Forest on the road. Big-armed Bears quarterback Bryce Petty is the real deal, and the speed of the Bears is very striking and puts a lot of pressure on opposing defenses. The weapons around Petty, including tailback Lache Seastrunk and a host of receivers, will continue to wreak havoc on defenses throughout the season. But the real reason for optimism in Waco is the Bears' defense. The unit definitely improved by the end of 2012, but this season's play has been even better. The defense held ULM to 295 total yards, and it seems as if the Bears' defenders are a little bit more athletic and smarter than last year. Art Briles' team has a real chance to be undefeated when it hosts Oklahoma on November 7, a game that could go a long way toward determining which team comes out of the Big 12 with a BCS bowl berth.

• Jeremy Hill proved once again that he is one of the best pure downhill running backs in college football, as the LSU star received a strong performance from an offensive line that paved the way for him to rush for a career-high 184 yards and tie a career high with three touchdowns, helping the Tigers beat Auburn 35-21 in a game that was only close because Les Miles' team took its foot off the gas pedal. Hill's rare combination of power and speed for a guy who's 6-2 and 235 pounds was evident on a touchdown of 49 yards and a 54-yard dash that nearly went for a score. The Tigers play Georgia next week, and we've seen the Bulldogs struggle to defend the run in games against Clemson and South Carolina. With Zach Mettenberger leading the improved aerial attack, the Tigers look like a real player in the SEC.

• The disaster that is FIU football continued this past Saturday, as Panthers head coach Ron Turner asked for a running clock so his game with Louisville would end quicker. The Cardinals won 72-0, holding the Panthers to just 30 yards. Thirty. Keep in mind that the Panthers beat the Cardinals just two years ago under Mario Cristobal.

• What a day for Pittsburgh quarterback Tom Savage, who tied an ACC record with six touchdown passes as the Panthers held on for a 58-55 win over Duke. Savage threw for a career-high 424 yards on 23 of 33 passing, helping Pitt claim its first ACC victory. Savage became the first ACC player to throw for six scores since Virginia's Dan Ellis and Florida State's Chris Weinke both did it in 1999. Nice to see such a standout day after a journeyman career.

• Iowa had two impressive feats occur in its 59-3 win over Western Michigan. Kevonte Martin-Manley returned back-to-back punts for touchdowns (83 and 63 yards), and B.J. Lowery returned a pair of interceptions for scores. The Hawkeyes enter Big Ten play with a three-game winning streak, their longest since 2010.