Let’s take a look back at some of the highlights from the fourth weekend of the season. And, in case you missed it on Sunday, check out the latest edition of the NFP Top 25.

• Bill Snyder does it again. Kansas State played 93 seasons of football before Snyder arrived in Manhattan, and the Wildcats went to just one bowl game over that time frame. The program lost 510 games before he stepped on campus, the most of any Division I-A team. But the veteran head coach resurrected a longtime doormat, performing nothing short of a miracle by taking the Wildcats to a Big 12 championship and a BCS bowl game. He did it with players that traditional Midwest or Southwest programs had no interest in. By the time he left Kansas State after the 2005 season he had recorded 10 years of at least 9 wins in 17 campiagns, including six 11-win seasons. He left Manhattan only to come back in 2009 and perform yet another rebuild. On Saturday night in Norman, he may have notched his most satisfying victory yet. The Wildcats are legit, and they will be part of a Big 12 race that should be compelling all season. 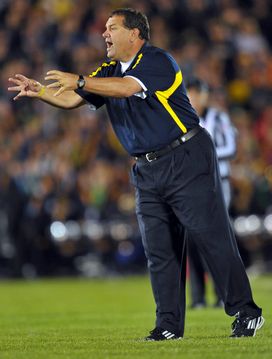 US PRESSWIREBrady Hoke and the Wolverines have not fared well in their spotlight games this fall.

• More Big Ten woes. The league has become the new ACC, a conference that both doesn't perform well in big games and has a tendency to lose to inferior talent. The Big Ten's nonconference slate has included losses to three MAC teams, a winless mark against Notre Dame in three tries, one win in four games against Pac-12 foes and a loss to Louisiana Tech. Michigan has looked awful in its two national primetime contests, Michigan State does not look anywhere near as good as its preseason projections and Nebraska was manhandled by UCLA. When Northwestern and Minnesota are carrying the league, as well as an Ohio State team that is ineligible for the postseason, that's not good. Perhaps things will be different in conference play. But in terms of national perception, the league has become a laughingstock.

• No love for LSU? A lot of people are dismissing the Tigers as being overrated because they weren't able to put Auburn away this past week. But since when is winning on the road in a rivalry game in the SEC not enough? Keep in mind that the defense pitched a shutout in the second half. Sure, quarterback Zach Mettenberger has not hit his stride yet. But dismissing LSU as overrated because of a close win is ridiculous. Les Miles still has the deepest backfield in America and a filthy defensive line. The game in two weeks at Florida will showcase this team's strengths, which are stout 'D' and a strong rushing attack. No matter the final score, I'll always be impressed by a team that holds an SEC opponent to 183 total yards, which LSU did to Auburn at Jordan-Hare Stadium.

• The FSU run game. The two main concerns for the Seminoles coming into this season were the play of the offensive line and whether an upper-echelon running back could be leaned upon on the ground. We have witnessed a young O-Line grow up, and we have seen Chris Thompson 100 percent healthy after a scary injury last season. Because of its strong defense and excellent play from quarterback EJ Manuel, having a consistent rushing attack has helped put this team on a path toward a possible BCS title game. Thompson rushed for 103 yards and two scores on 15 carries this past week against Clemson a week after his 197-yard, two-touchdown effort on just nine carries against Wake Forest. Check out his explosive 41-yard run against the Tigers on Saturday night. NFL personnel surely took notice.

CONTINUE TO PAGE 2 FOR MORE AFTER FURTHER REVIEW: WEEK 4