Let’s take a look back at some of the highlights from the eighth weekend of the season. And, in case you missed it on Sunday, check out the latest edition of the NFP Top 25.

• It still boggles my mind why LSU does not run the football more often. The Tigers have the luxury of having the deepest backfield in the nation, and true freshman Jeremy Hill emerged as the latest breakout tailback last week with 124 yards in the win over South Carolina. He followed that effort up with 127 more on Saturday against Texas A&M. But too many times Les Miles and Co. allow Zach Mettenberger to drop back and chuck the ball down the field, specifically early in the second half against the Aggies on three straight plays that resulted in a three-and-out. Pass protection and poor receiver play have contributed to the team's offensive woes besides subpar play from Mettenberger, but giving the junior-college transfer too much control of this offense will eventually doom the Tigers and knock them out of the BCS title race. The Bayou Bengals need to do what they do best: run the football, stop the run and force turnovers, as they did against A&M later in the game. They can't be one-dimensional and beat Alabama, but they also need to put a greater emphasis on playing to their strength offensively: rushing the football. 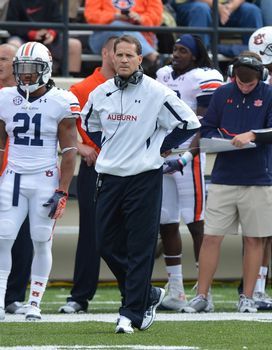 US PRESSWIREIs Gene Chizik on the way out at Auburn?

• Auburn lost yet again, dropping its contest to Vanderbilt 17-13. Gene Chizik's record as a head coach without Cam Newton, including his stint at Iowa State? 22-35. Despite the fact that the last few recruiting classes have been very good for the Tigers, leading most around the program to believe that the team is set up best for 2013 and beyond, sitting at 1-6 two years removed from a national title is inexcusable. And fireable. The Tigers are staring at a 3-9 campaign, and an SEC head coach can't survive that mark. I believe that Chizik should get another year with new defensive coordinator Brian VanGorder and offensive coordinator Scot Loeffler. But there is serious talk in Alabama of buying out Chizik's contract. No amount of money is too rich for the school, and there's an overwhelming amount of negativity surrounding the program after the team suffered losses to Ole Miss and Vanderbilt in back-to-back weeks.

• Collin Klein is now the frontrunner to claim this year's Heisman Trophy. The dual-threat Kansas State signal-caller had a monstrous game against West Virginia, which has now been outscored 104-28 the past two weeks. Klein ranks No. 2 nationally in passing efficiency, is completing over 70 percent of his passes and has thrown just two interceptions on the year after his seven-touchdown effort against the Mountaineers. It may not look pretty at times, but no other player in America is as important to his team as the gritty Klein is to KSU. The Wildcats have a very manageable slate the rest of the way, but will this team get penalized in the BCS rankings because the Big 12 does not have a league title game?

• Remember when there was an overwhelming sentiment that Will Muschamp was in over his head at Florida after his 7-6 debut campaign? Those days are over as the Gators remained undefeated with an emphatic 44-11 win over South Carolina at The Swamp. UF controls its own destiny in the SEC East, and I'm intrigued by what kind of a test Georgia will provide this week in the World's Largest Cocktail Party. The Bulldogs have a ton of talent, but this is the same team that was blown out by South Carolina. Most impressive about the Gators is that Muschamp and offensive coordinator Brent Pease are slowly turning quarterback Jeff Driskel loose. This will always be a downhill rushing attack behind tailback Mike Gillislee and Driskel, as well as an east-to-west gimmicky offense because of Pease's stint at Boise State. But we are seeing Driskel take some shots down the field as well, and that will be needed in a potential SEC title game against Alabama or LSU. And even against Florida State in the regular season finale.

CONTINUE TO PAGE 2 FOR MORE AFTER FURTHER REVIEW: WEEK 8