Alabama didn’t lose its offensive coordinator to a head coaching job after winning the national championship and having a Heisman Trophy-winning running back last season. 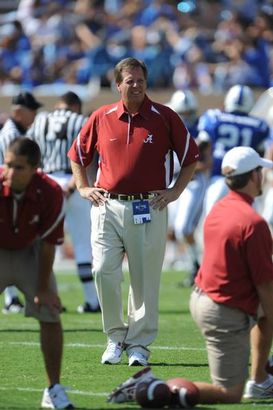 While the Crimson Tide may have had a down year by their high standards in 2010, their assistant coaches remain hot commodities.

According to The Denver Post, offensive coordinator Jim McElwain interviewed for the Colorado head coaching job and is reportedly a strong candidate for the gig.

McElwain has been in Tuscaloosa since January 2008 after serving as the offensive coordinator at Fresno State in 2007. Before that, he was quarterbacks coach for the Oakland Raiders in 2006.

According to a report this past Sunday, Ole Miss head coach Houston Nutt was in line to become the next head coach in Boulder.