Spring practice kicks off in Tuscaloosa on Friday afternoon as Alabama begins preparations to defend its 2011 BCS national championship.

Let's take a look at some of the storylines that will play out over 15 practices as the Crimson Tide work towards their spring game in April.

Can Yeldon seize the opportunity? 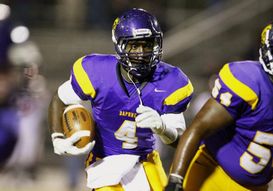 T.J. Yeldon will have a chance to make an immediate impact with the Tide.

Trent Richardson is moving onto NFL riches, and projected starter Eddie Lacy will miss spring practice because of surgery for turf toe. So early enrollee freshman T.J. Yeldon will have a big opportunity to make an impression at running back. The five-star recruit, who was once committed to Auburn before making a late switch to the Crimson Tide, was named Alabama's 2011 Mr. Football and will get every opportunity to receive a healthy dose of carries in the fall because head coach Nick Saban likes to spread the wealth at RB. It also helps Yeldon's cause that Class of 2011 star recruit Dee Hart is recovering from an ACL tear. So while Lacy may be the de facto starter, the tall, lean Yeldon will get a head start in the competition for carries. He also has the ability to split out wide, but his opportunities on the field will be limited if he doesn't pick up the team's blocking schemes, which is always an adjustment for a young back. Jalston Fowler, meanwhile, is the short-yardage runner. He had 56 carries last year and should remain a bruising force in new offensive coordinator Doug Nussmeier's system.

Quarterback AJ McCarron had his coming-out party in the title game against LSU, so the expectations are that this offense will open up, especially now that the Tide have more weapons at receiver despite the loss of Marquis Maze and Darius Hanks. Kenny Bell and Kevin Norwood showed flashes in small doses last season, so they will have every opportunity to start. DeAndrew White and Christion Jones will also be in the mix. But the real excitement lies in the potential of true freshmen Chris Black and Amari Cooper as well as redshirt freshman Marvin Shinn. The Tide will still use the run as their bread and butter, but expect McCarron to take shots down the field to loosen up defenses.

There is no rebuilding at Alabama under Saban. He just reloads, especially on defense. And the Tide will do that once again in 2012. Despite entering last season having lost four first-round picks to the NFL, the Tide's defense arguably got better in 2011. They'll have their work cut out for them this season, however, as Mark Barron, Dre' Kirkpatrick, DeQuan Menzie, Dont'a Hightower, Courtney Upshaw, Josh Chapman and Jerrell Harris are all gone. But the cupboard isn't bare. Keep an eye on junior college cornerbacks Travell Dixon and Deion Belue in the secondary as well as linebackers Nico Johnson, C.J. Mosley, Adrian Hubbard and Trey DePriest. The return of Robert Lester and Dee Milliner will help the secondary as well. Replacing nose guard Josh Chapman may be the biggest spring concern for coordinator Kirby Smart, but Jesse Williams will get the opportunity to fill that void.

In addition to Lacy, Saban announced on Monday that Arie Kounadjio, the Tide's prized offensive line recruit from 2011, will miss spring practice recovering from offseason surgeries. In addition, former Ohio State wide receiver Duron Carter remains on suspension, while Michael Bowman and Ronald Carswell are no longer listed on the Alabama roster. And seniors Undra Billingsley and Tyler Love will not return for their final year of eligibility.