Alabama held its annual spring game in front of 73,506 fans at Bryant-Denny Stadium in Tuscaloosa on Saturday, and it wasn't a standout day for any of the current Crimson Tide quarterbacks.

Head coach Nick Saban and his offensive staff are trying to replace longtime starter AJ McCarron, and Florida State transfer Jacob Coker is expected to step in and ultimately win the job once he finishes his undergraduate degree in Tallahassee. But until he's enrolled at Alabama later this month, he could only watch his fellow signal-callers struggle during the A-Day game. 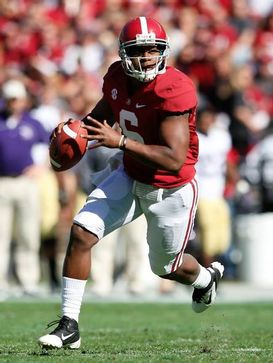 Blake Sims seemed out of rhythm and looked nervous in the team's spring game.

Blake Sims, McCarron's backup last year, passed for 178 yards with one touchdown but had two interceptions on 13-of-30 passing. Sims had been enjoying a strong spring with two reported strong efforts in earlier scrimmages, but he often times was out of rhythm and looked nervous on Saturday. He also didn't get great play from his offensive line at times either.

Cooper Bateman, who redshirted last season, had nice strikes to Robert Foster and ArDarius Stewart but struggled with consistency. He finished with 156 yards and a touchdown on 11-of-24 passing and was sacked three times.

Alec Morris, who had a solid showing as a punter, threw for just 9 yards with an interception.

Meanwhile, freshmen Parker McLeod and David Cornwell did not stand out either. McLeod threw an interception on his first pass attempt and Cornwell nearly fumbled on his first play from scrimmage.

While Coker still has to prove that he is a quick learner and embrace new coordinator Lane Kiffin's offense, he is expected to ultimately end up beating out Sims, who will continue to compete for the job through the summer and fall camp. All reports out of Tuscaloosa this spring had the former running back/wide receiver improving as a passer, so perhaps Saturday's effort was more of an aberration than anything for Sims.

But there's no doubt that Coker has a chance to step in and wrest the starting job away for the Tide because Saturday underscored the glaring hole under center following McCarron's departure.