All eyes on Morris as 'Canes prepare for FSU

After its upset victory over Florida in the second week of the season, expectations for Miami (FL) soared because of the way the defense stepped up despite entering the season with serious question marks.

But after close wins over North Carolina and Wake Forest the last few weeks, the biggest question mark now centers on senior quarterback Stephen Morris, who has underwhelmed this fall after winning the skills competition at the Manning Passing Academy this past summer. The QB combined to throw just one touchdown against four interceptions in the two close wins over the Tar Heels and the Demon Deacons. 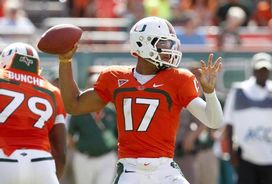 Stephen Morris has tossed just one touchdown compared to five interceptions in the second halves of games this season.

And if the 22-point underdog Hurricanes have any chance to beat the Seminoles in Tallahassee on Saturday in the battle of Top 10 unbeateans, Morris is going to have to play like the potential NFL first-round draft pick that some scouts believed he could be — particularly in the second half and on third-down attempts.

The athletic signal-caller has had an up-and-down 2013 campaign, throwing nine touchdowns to just three interceptions in the first halves of contests this year. However, it's been a different story in the third and fourth quarters of games. Morris has tossed just one touchdown compared to five interceptions in the second halves of contests, and his completion percentage has also dropped in the final thirty minutes of games. Perhaps more indicting is his lack of production on third downs. Morris is completing just 40.9 percent of his throws with six interceptions on third downs this year — numbers that will lead to plenty of three-and-outs against coordinator Jeremy Pruitt's tough FSU defense this Saturday.

The 6-2, 218-pound Morris, who is averaging 209 yards per game through the air on 59.9 percent passing with 10 touchdowns and eight interceptions, certainly has placed plenty of doubt in the minds of some NFL scouts who believed he possessed first-round talent entering the season. While his arm strength is apparent, he has struggled with his accuracy and mechanics this fall.

Perhaps a right ankle injury is affecting the play of Morris more than he would let on. If the gimpy ankle continues to plague his production, then Jameis Winston and the 'Noles should have no problem with the 'Canes this week. Keep in mind that Al Golden's team has really only played one top-flight defense this year, and that was against Florida. Morris and the offense were held in check in the second half of that game, and it might suffer the same fate against the 'Noles unless Morris can deal with the expected pressure from FSU up front and clean up the mechanical issues that have affected his play throughout the season. Because Duke Johnson can't beat the 'Noles by himself no matter how impressive the sophomore running back has been in his short career.

<p> Is Morris poised to finally deliver a signature performance worthy of this past offseason's praise from some NFL scouts? We'll find out on Saturday.