Alvarez could coach Wisconsin in 2013

Barry Alvarez will be looking to go 4-0 all-time in the Rose Bowl when Wisconsin battles Stanford on New Year's Day. The longtime Badgers head coach, who compiled a 118-73-4 record in 16 years as the face of the program in Madison, will be on the sideline for the January 1 game against the Cardinal after Bret Bielema elected to take the head-coaching job at Arkansas. 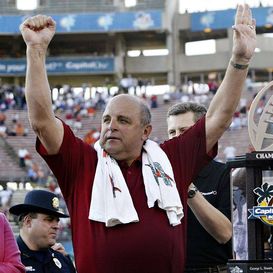 US PRESSWIRECould Barry Alvarez stay on as Wisconsin's head coach past the Rose Bowl?

But is Alvarez really returning for just a cameo?

The Wisconsin athletic director is seemingly having difficulty finding a replacement for Bielema, and there's growing sentiment around college football circles that Alvarez is giving some consideration to running the Badgers in 2013 with a head-coach-in-waiting in place for 2014 and beyond.

Bruce Feldman of CBSSports.com noted the possibility in a Tweet on Saturday night, as a source told him that Alvarez may be "seriously tempted" to make a full-year return to the sideline.

The Badgers AD ran the program from 1990 through 2005, taking the school to three Rose Bowls.

Some big names reportedly linked to the opening, including Oregon State's Mike Riley and Miami's Al Golden, were never serious candidates for the job. And it appears that Alvarez has no interest in pushing for Paul Chryst to leave Pittsburgh after one year to come back to Madison as head coach.

Because this search is dragging on, former Badgers tight ends coach Joe Rudolph could be emerging as the best remaining candidate. He is the offensive coordinator at Pitt under Chryst. If Alvarez really isn't going to go after the Pitt head coach, Rudolph may be the best option left.

The other option for Alvarez could be to coach the team in 2013 and bring in Rudolph with the expectation that he would become head coach in 2014. That could be a scenario in which Rudolph would enjoy, but it might be more likely that Alvarez just name him head coach right away instead because Alvarez enjoys his life as an athletic director.