A&M preps for its second season in the SEC

While many Texas A&M fans continue to count down the days until the highly anticipated home game against Alabama and wonder if Johnny Manziel can capture a second consecutive Heisman Trophy, the Aggies will endure spring practice as they begin early preparations for their second season in the SEC.

Kevin Sumlin's squad began spring ball this past Saturday trying to replace more than half of its starters from a team that went 11-2 in its first campaign in the toughest conference in the nation.

Let's take a look at some of the most intriguing storylines as the Aggies prep for their spring game on April 13.

Manziel will try to get comfortable with new faces calling the shots on offense with former offensive coordinator Kliff Kingsbury now the head coach at Texas Tech. New OC Clarence McKinney replaced Kingsbury leading up to the Cotton Bowl win over Oklahoma, so there's familiarity already. But the Aggies also added co-coordinator and quarterbacks coach Jake Spavital, who arrived from West Virginia. Spavital knows this Air Raid system, coming from working with Dana Holgorsen. But not even Spavital can expect to know everything about Johnny Football's skill set right away. This spring will give the pair an opportunity to further familiarize themselves with one another. Losing Kingsbury will certainly be an adjustment, but this offense eventually will once again find its rhythm. Besides boasting the reigning Heisman winner, the Aggies have arguably the best running back depth in the country with Ben Malena, Brandon Williams, Trey Williams and Tra Carson. Malena has the edge in experience, but Brandon Williams will get his share of touches after transferring from Oklahoma. 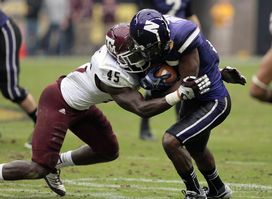 US PRESSWIRESteven Jenkins could be a force in coordinator Mark Snyder's defense.

The Aggies were able to win 11 games last season despite not having the typical stout defense that most top SEC programs boast. The offense carried the load, especially in the shootout win over Louisiana Tech. But the unit played pretty well in the second half of the season, although a lot of the pieces have departed — especially up front. While the offense could be as prolific this coming season as it was in 2012, Sumlin unquestionably wants to see his young defense grow up fast. Finding a pass rusher to replace Damontre Moore is the top priority. Could junior Tyrell Taylor help out at rush end for a unit that loses four starters from last season's front seven? Defensive tackle Alonzo Williams is the most experienced member up front. Coordinator Mark Snyder likes to play an aggressive style, but A&M didn't produce a ton of big plays or force a lot of turnovers last fall. The development of strongside linebacker Steven Jenkins and sophomore end Julien Obioha will be huge for the Aggies defense.

If Manziel stays healthy, the A&M offense will continue to be in good hands. But with Jameill Showers transferring to UTEP, the backup quarterback job is up for grabs. And it's an important job if Manziel misses a few plays here and there. Class of 2012 early enrollee Matt Davis is a dual-threat who competed for the starting job last offseason, and his athleticism may give him the edge over junior Matt Joeckel, who has the stronger arm of the two. Incoming freshmen Kohl Stewart and Kenny Hill are developmental prospects.

With potential top overall pick Luke Joeckel departing College Station, senior Jake Matthews will move from the right side to left tackle. Moving to right tackle will be former right guard Cedric Ogbuehi. Thus, the Aggies need to find a replacement for Ogbuehi at his old spot. That battle looks like it will center on redshirt freshman Germain Ifedi and junior Ben Compton. Compton was an invaluable reserve in 2012.