An early glance at Week 1

It is officially game week.

With the start of the new college football season just a few days away, let's take a quick look at the best contests of Week 1.

North Carolina at South Carolina: The Tar Heels will continue to be prolific offensively as they enter the second year in Larry Fedora's system, and Bryn Renner is a very underrated quarterback who posted four consecutive 300-yard games to close out 2012. But can UNC deal with one of the best defensive lines in the country, and will Jadeveon Clowney have a strong start to a Heisman Trophy run? Also keep an eye on how Steve Spurrier uses Connor Shaw and Dylan Thompson — because Head Ball Coach will almost certainly play both.

Tulsa at Bowling Green: The Golden Hurricane, a program that is off to the American Athletic Conference after this season, won the 2012 C-USA championship because of their strong rushing attack. The Falcons, though, should still be strong against the run despite the loss of tackle Chris Jones. Tulsa, however, needs playmakers to emerge on defense.

Utah State at Utah: The Aggies begin their first season in the Mountain West Conference with Chuckie Keeton as one of the best dual-threat quarterbacks in the country but a new head coach in Matt Wells after Gary Andersen left to take over at Wisconsin. The Utes, meanwhile, will miss star tailback John White. Can Dennis Erickson's arrival help the offense? 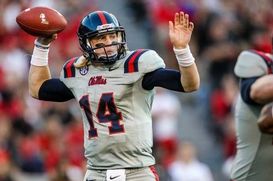 US PRESSWIREBo Wallace should be even more comfortable as a second-year starter.

Ole Miss at Vanderbilt: The nation gets to see the debut of Robert Nkemdiche, who will team with his brother and help an emerging Rebels defense. Meanwhile, the Commodores return a ton of starters from a team that scored more points than any Vandy team since 1916 and fielded a Top 20 defense. New starting quarterback Austyn Carta-Samuels will be protected by a good, strong offensive line.

Rutgers at Fresno State: The Scarlet Knights will move to the Big Ten after this year, but they'll try to win the inaugural American Athletic Conference crown with a defense that lost a lot of talent from last year's squad. Meanwhile, Bulldogs quarterback Derek Carr is the reigning Mountain West offensive player of the year, and Fresno is a popular potential BCS buster pick.

USC at Hawaii: Trojans head coach Lane Kiffin said that he will play both Max Wittek and Cody Kessler in this game because neither quarterback had separated himself from the other during their offseason competition for the starting nod. The Warriors, meanwhile, scored 14 points or fewer in six of their 12 games last season.

Texas Tech at Southern Methodist: Kliff Kingsbury debuts as the Red Raiders' new head coach with two freshmen at quarterback with Michael Brewer sidelined with a back issue. Garrett Gilbert, meanwhile, did not throw an interception in his final five regular season games last year. But do the Mustangs have enough playmakers around him?

Purdue at Cincinnati: Darrell Hazell and Tommy Tuberville meet in a matchup of head coaches leading new programs. Expect a lot of Akeem Hunt for the Boilermakers offensively, while the Bearcats are looking to score a win over a Big Ten foe and give Louisville all it can handle in the American.

Toledo at Florida: The Gators will face a Rockets squad that will field a potent spread attack featuring quarterback Terrance Owens, tailback David Fluellen and receiver Bernard Reedy. Does Will Muschamp's squad have enough playmakers on offense to keep up?

Mississippi State vs. Oklahoma State*: Mike Gundy will likely play both Clint Chelf and J.W. Walsh, but it's Glenn Spencer's more aggressive defense that will give the Bulldogs problems.

Syracuse vs. Penn State*: Bill O'Brien has yet to name a starting quarterback for the Nittany Lions, but whoever is under center will direct an offense that has a good amount of playmakers. Meanwhile, we still don't know the starting quarterback at Syracuse either, as Drew Allen and Terrel Hunt continue to battle it out for the nod.

BYU at Virginia: Mike London has verbal commitments from a couple of the nation's best players in the Class of 2014, but he needs to win this year in order to actually see them in Charlottesville. The hope is that new coordinator Steve Fairchild can improve the offense. Meanwhile, Kyle Van Noy leads a stellar Cougars defense.

Northern Illinois at Iowa: Jordan Lynch begins his Heisman campaign against a team the Huskies could have beaten last year at Chicago's Soldier Field. For the Hawkeyes, they will look to get back to the postseason after a disastrous 2012 campaign.

Louisiana-Lafayette at Arkansas: The Ragin' Cajuns led the Sun Belt in scoring last year, and the Razorbacks lost to Louisiana-Monroe in 2012. We'll see the debut of what should be a tougher Hogs squad under new head coach Bret Bielema.

Alabama vs. Virginia Tech*: Logan Thomas tried to do way too much for the Hokies last season, which resulted in a disappointing campaign. He still may not have enough weapons around him this fall, either. The Crimson Tide, meanwhile, will be starting their quest for a fourth BCS national title in five years.

Louisiana-Monroe at Oklahoma: Do the Warhawks have a major upset in them after taking out Arkansas last year? Todd Berry's squad also almost beat Auburn and Baylor in 2012. How much will we see of Blake Bell after Trevor Knight won the starting quarterback job in Norman? 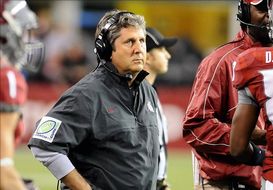 US PRESSWIREMike Leach will try to get Washington State back to the postseason.

Washington State at Auburn: Nick Marshall debuts as the starting quarterback on The Plains, but he'll need to limit his turnovers if he is going to keep the job away from Jeremy Johnson. Mike Leach begins his second season at Washington State hoping to get the Cougars to a bowl game for the first time in 10 years. Keep in mind that Leach made the postseason every year he was at Texas Tech.

Georgia at Clemson: Ten of the 22 Bulldog players on the defensive two-deep have not played a down of FBS football. And eight are true freshmen. They may be talented, but that's too tough of a task against a Chad Morris offense. Meanwhile, will Brent Venables have an improved defensive unit, particularly in his secondary?

LSU vs. TCU*: Will Jeremy Hill play? Will Devonte Fields actually see action after appearing as an "OR" on the Horned Frogs' depth chart despite being announced earlier in the offseason as suspended? Cam Cameron's Tigers offense will be the focal point because there are high expectations for LSU quarterback Zach Mettenberger.

Boise State at Washington: Will Austin Seferian-Jenkins be in the lineup for a Huskies squad that needs better offensive line play and more consistency from quarterback Keith Price? Meanwhile, the Broncos should be better on offense but depth is a concern on the other side of the football.

Ohio at Louisville: Teddy Bridgewater begins his Heisman Trophy campaign against an Ohio squad that still features quarterback Tyler Tettleton and running back Beau Blankenship. Line play on both sides will determine the Bobcats' success in 2013.

Florida State at Pittsburgh: Jameis Winston will make his debut on the road against Pitt, which is playing its first game as a member of the ACC.

* denotes that it is a neutral site