An early glance at Week 2

With the start of the new college football season officially underway after an exciting first weekend, let's take a quick look at the best contests of Week 2.

Florida at Miami (FL): The Gators and the Hurricanes will meet for what will be the final time for the foreseeable future. UF looked a bit more productive on offense in the opener than I had anticipated, with Mack Brown filling in nicely for Matt Jones at running back. But can Will Muschamp's defense slow down Stephen Morris, Duke Johnson and that high-powered Hurricanes offense?

South Florida at Michigan State: Willie Taggart's first season with the Bulls began disastrously, as USF was blown out at home by McNeese State by 32 points. The bright spot, however, came when Bobby Eveld sparked the offense when he replaced Matt Floyd at quarterback after Floyd tossed two interceptions. Meanwhile, the Spartans struggled on offense in a win over Western Michigan, rotating quarterbacks Andrew Maxwell and Connor Cook. The defense did the job by scoring two touchdowns, though. How improved will both teams be after sluggish starts? 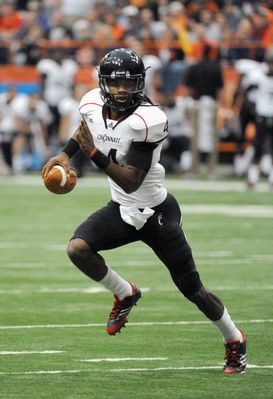 US PRESSWIREMunchie Legaux and the Bearcats will look to open the year with a two-game Big Ten sweep.

Cincinnati at Illinois: Tommy Tuberville's debut with the Bearcats was a rousing success, as Munchie Legaux stepped in at quarterback because incumbent Brendon Kay was dealing with a sore throwing shoulder. The Illini, meanwhile, held off a late Southern Illinois rally but received a career-high 416 passing yards from Nathan Scheelhaase.

Western Kentucky at Tennessee: The Hilltoppers beat in-state rival Kentucky for a second straight year in the debut of Bobby Petrino, scoring on three of their first four possessions. The competition takes a step up this week, though, as Butch Jones' Tennessee squad will look to move to 2-0. The Vols received 141 rushing yards from Rajion Neal and three touchdown passes from Justin Worley in a 45-0 rout of Austin Peay last week. The Vols reached the end zone on each of their six first-half possessions.

Oregon at Virginia: The Cavaliers notched a huge home win for Mike London over BYU in Week 1, but the competition takes a major step up with the Ducks coming to Charlottesville. Mark Helfrich's squad showed that it will remain an offensive juggernaut despite the loss of Chip Kelly, while the Cavs just don't have the firepower to keep up with the high-octane Ducks.

South Carolina at Georgia: The Gamecocks are trying to beat the Bulldogs for the fourth straight time, but they'll be facing a salty squad in Athens that fell short in its opener against Clemson. The 'Dawgs have not forgotten about being blown out in Columbia last year, and they will be getting back safety Josh Harvey-Clemons, who missed the opener. However, Mark Richt's team suffered a major blow when receiver Malcolm Mitchell was lost for the season.

Syracuse at Northwestern: These two teams played a thriller last year, and they'll meet again after playing difficult nonconference openers in Week 1. Oklahoma transfer Drew Allen struggled in his Syracuse debut, finishing 16 of 37 for 189 yards and two interceptions against Penn State. Wildcats starting quarterback Kain Colter, meanwhile, went down with a concussion after the second play from scrimmage against Cal. But Trevor Siemian played hero last year when these two teams met.

Louisiana-Lafayette at Kansas State: Both teams are trying to avoid dropping to 0-2 after the Ragin' Cajuns lost to Arkansas and the Wildcats fell to back-to-back FCS national champion North Dakota State. Terrance Broadway had a quiet day for Louisiana-Lafayette in the opener, while new K-State quarterback Jake Waters threw for 280 yards and two touchdowns but also threw two interceptions. Can the Wildcats bounce back against a Ragin' Cajuns team that entered 2013 coming off back-to-back 9-4 seasons?

Texas at BYU: The Longhorns started slowly against New Mexico State, as David Ash threw two first-half interceptions. But he put the mistakes behind him, tossing touchdown passes of 54, 66, 74 and 25 yards, and he also ran 55 yards for a score for Mack Brown's squad. The Cougars, meanwhile, received a disappointing performance from Taysom Hill, who was just 13 of 40 passing for 175 yards with an interception in a loss at Virginia. Can the Cougars' defense keep them in this one?

West Virginia at Oklahoma: The Sooners allowed Tavon Austin to rush for 344 yards and two touchdowns in last year's contest despite the receiver playing out of position. There is no more Austin for WVU, and the OU defense looked surprisingly strong in its opener against Louisiana-Monroe. Paul Millard and Charles Sims will likely need to have big games if the 'Neers want to spring an upset in Norman.

Arkansas State at Auburn: The Red Wolves had four different rushers with over 100 yards in a rout of Arkansas-Pine Bluff in the season opener, while the Tigers used a Tre Mason 100-yard kickoff return for a touchdown, a Corey Grant 75-yard scoring run and two Robenson Therezie interceptions to beat Washington State. Arkansas State is on a nine-game winning streak, a run that began under Gus Malzahn, who is now the Tigers' head coach.

Notre Dame at Michigan: With the two historical programs unable to agree upon a schedule beyond 2014, the Fighting Irish will make their last visit to the Big House for quite a while. Notre Dame won 13-6 last season in South Bend, forcing six turnovers. But the Wolverines have won three straight at home in the series, and Devin Gardner wasn't running the offense in last year's loss.

Washington State at USC: The Cougars were better on the ground and in pass protection against Auburn in its season opener compared to last season, but they will be tested by a talented USC defense that looked improved under new coordinator Clancy Pendergast in the team's season opener against Hawaii. But who will emerge as the top quarterback option for the Trojans?

San Jose State at Stanford: These teams played a very tight game last fall, as the Cardinal needed a late field goal to pull out a 20-17 win over the Spartans. However, David Shaw did not have Kevin Hogan under center for that contest. The Spartans, though, return star quarterback David Fales, who played well in the meeting last year but threw an interception to Ed Reynolds late in the game to seal a Cardinal win.