An early glance at Week 3

Two weeks of the new college football season are in the books, and we've already had surprising early season losses for some traditional major powers. Let's take a quick look at what could be in store for the best contests of Week 3.

TCU at Texas Tech: The Horned Frogs will be without Casey Pachall, who suffered a fractured arm on Saturday and could miss up to eight weeks. Trevone Boykin brings a bit more athleticism to the position, but will he be able to limit his mistakes? Meanwhile, walk-on true freshman Baker Mayfield has solidified the quarterback position in Lubbock with Michael Brewer still sidelined.

Air Force at Boise State: The Falcons and the Broncos meet in a very important Mountain West matchup because the new league setup now has two divisions and a championship game, so this is an interdivision clash. Troy Calhoun's team was smacked at home 52-20 by Chuckie Keeton and Utah State last week, but expect a better effort on Friday night on the blue turf. Meanwhile, the Broncos' Joe Southwick is coming off of a five-touchdown effort in a blowout of Tennessee-Martin.

Louisville at Kentucky: The Cardinals face an in-state test against a Wildcats team that is one win away from equaling last year’s total of two. Louisville quarterback Teddy Bridgewater already has 752 passing yards and nine touchdowns in two games, and he's completing over 75 percent of his passes. Maxwell Smith, however, is off to a strong start under center as well for the 'Cats, and Raymond Sanders and Jalen Whitlow pace a sound rushing attack. But can Kentucky stop the Louisville offensive attack? It will be a chore, although the defense was much improved against Miami (OH) last week. 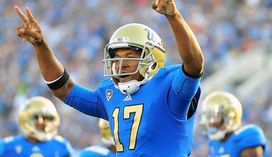 US PRESSWIRECan Brett Hundley and the Bruins beat the Cornhuskers for the second year in a row?

UCLA at Nebraska: Last season, Brett Hundley passed for 305 yards and four touchdowns against the Cornhuskers at the Rose Bowl in a 36-30 win, and the Bruins amassed 653 total yards of offense. The Huskers were just 1 of 11 on third downs, and Taylor Martinez was not very efficient through the air. Can the Huskers 'D' come up big in Lincoln, and will T-Magic be able to keep up with Hundley and the Bruins' offense?

Fresno State at Colorado: The Bulldogs will be facing a Buffaloes squad that is much different from the one that was throttled by them 69-14 last year. The quarterback-receiver combo of Connor Wood and Paul Richardson has been huge for Mike MacIntyre's squad, as Richardson is coming off of back-to-back 200-yard-plus performances against Colorado State and Central Arkansas. But will the Buffs have any answer for prolific Bulldogs quarterback Derek Carr?

Boston College at USC: Embattled Trojans head coach Lane Kiffin named Cody Kessler his starting quarterback for the team's game against the Eagles, but will it even matter? The Trojans' longest pass play in a loss to Washington State last week went for eight yards, and the offense as a whole recorded just 193 yards on 63 plays, allowing a dominant defensive effort to go to waste. Will we hear more boos and "Fire Kiffin!" chants raining down from the stands on Saturday at the Coliseum as 'SC tries to put points on the board against a stingy BC defense?

Alabama at Texas A&M: Quite simply, the game that everyone has been waiting for throughout the entire offseason will finally take place in College Station. What does Crimson Tide head coach Nick Saban have in store for Aggies quarterback Johnny Manziel after the dual-threat signal-caller stormed into Tuscaloosa and stunned the Tide last season? Keep an eye on Alabama's offensive line after its rough Week 1 debut, although the Aggies are not stout up front.

Tennessee at Oregon: The Butch Jones era has started off strong in Knoxville, but the Vols will be facing their toughest test perhaps of the entire season when they travel to Eugene to take on the Ducks. Mark Helfrich's squad recorded 557 total yards in a 59-10 win at Virginia last week, and seven of its eight touchdown drives against the Cavaliers came in under two minutes. The Vols will try to force turnovers and rely on Marlin Lane and Rajion Neal to carry the load offensively to eat up clock.

Washington at Illinois: The Huskies enjoyed a bye week after their thorough victory over Boise State in Week 1. Meanwhile, the Fighting Illini are coming off of an impressive win over Cincinnati in which quarterback Nathan Scheelhaase threw for 312 yards and four touchdowns in new coordinator Bill Cubit's pass-happy offense. Illini athletic director Mike Thomas is looking to expand the Illini brand in the Chicago area, so he expects a good performance at Soldier Field. But Steve Sarkisian's Huskies will be a major test, especially if quarterback Keith Price and tailback Bishop Sankey play as well as they did against the Broncos.

UCF at Penn State: The Knights should pose a serious challenge to Bill O'Brien and the Nittany Lions, as George O'Leary's team has outscored its first two opponents (Akron and FlU) 78-6. Quarterback Blake Bortles and tailback Storm Johnson lead an offense that also features depth at receiver. UCF may be the American Athletic Conference's top candidate to knock off Louisville. PSU quarterback Christian Hackenberg will need help from a rushing attack featuring Zach Zwinak and Bill Belton to move the football.

Ohio State at Cal: Will Braxton Miller be able to go for the Buckeyes? Head coach Urban Meyer said he's "fairly optimistic" about Miller's chances to play against the Golden Bears. And if he's not able to go, Kenny Guiton will get the call. This game is a bit scary for the Buckeyes because their front seven still has issues, and Bears quarterback Jared Goff is averaging 458 passing yards per game.

Vanderbilt at South Carolina: The Commodores and the Gamecocks will be looking to avoid a second loss in the SEC, so this game is one to watch. Georgia recorded over 500 yards of offense against the Gamecocks last week, including over 300 yards passing and four touchdowns. 'Dores quarterback Austyn Carta-Samuels will look to exploit the Gamecocks' secondary with receiver Jordan Matthews, but Vandy must be able to run the ball effectively as well. Meanwhile, South Carolina running back Mike Davis is the only player in the country to have gone for two 75-yard runs. And Carolina quarterback Connor Shaw is unbeatable at Williams-Brice.

Mississippi State at Auburn: The Tigers enjoyed a surprisingly comfortable 38-9 victory over Arkansas State last week, but how will quarterback Nick Marshall do in his first conference test? He remains a bit inconsistent, but he has big-play ability. Just re-watch his 68-yard scoring strike to Sammie Coates against the Red Wolves. Expect a healthy dose of Tre Mason and the rushing attack against a Bulldogs team that will either start Tyler Russell or Dak Prescott at quarterback. Russell is recovering from a concussion he suffered against Oklahoma State.

Notre Dame at Purdue: After their loss to Michigan, the Fighting Irish are looking to regain the defensive form that carried them to a berth in the BCS national championship game last year. The Boilermakers should be overwhelmed by a salty Brian Kelly squad that will look to establish a rushing attack that generated just 96 yards against Michigan.

Ole Miss at Texas: After Texas allowed BYU to rush for an astounding 550 yards, which was the most rushing yards Texas has ever allowed in a game, how can the Longhorns rebound under new defensive coordinator Greg Robinson? Bo Wallace and Jeff Scott present a challenge on the ground, and will any Longhorns defender be able to stop emerging true freshman receiver Laquon Treadwell?

Oregon State at Utah: The Utes' Travis Wilson may be the best quarterback that no one is talking about right now, and he'll have a chance to move the football against a Beavers defense that we still don't know much about after two weeks. Eastern Washington put up 49 points against the Beavers in the opener, and Week 2 opponent Hawaii has issues on offense.

Wisconsin at Arizona State: After two weeks, we know the Badgers will continue to pound the ball with their stable of tailbacks such as James White and Melvin Gordon. But their first two opponents were UMass and Tennessee Tech. The Sun Devils will pose a serious threat in Tempe because they boast a stout defensive line led by Will Sutton.