An early glance at Week 5

Four weeks of the new college football season are in the books, which means that conference play is beginning to get into full swing across the country. Let's take a quick look at what could be in store for the best contests of Week 5. 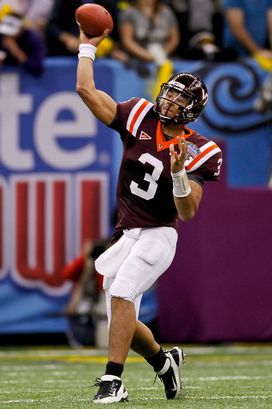 US PRESSWIRECan Logan Thomas and the Hokies steal a road win in Atlanta?

Virginia Tech at Georgia Tech: The Hokies and the Yellow Jackets meet in a key ACC Coastal division matchup in Atlanta. The Hokies have won more ESPN Thursday night games than any other ACC school, but Frank Beamer's squad did not look good in its win over Marshall. Bud Foster's defense will have to win this game for the Hokies, which will be difficult to do because the Jackets excel on the ground. We'll also see if Logan Thomas can navigate Ted Roof's defense.

Utah State at San Jose State: This is a key Mountain West matchup despite both teams already having two losses overall. Chuckie Keeton and the Aggies came up short in losses to Pac-12 squads Utah and USC, while David Fales and the Spartans proved to be no match for Stanford and Minnesota.

South Carolina at Central Florida: This is a dangerous game for the Gamecocks, as the Knights proved in their win over Penn State that they can be a legit threat to Louisville in the American Athletic Conference. UCF has a strong offense led by Blake Bortles, Storm Johnson and a good receiving corps, but a younger defense will have to contain Connor Shaw, Mike Davis, Shaq Roland and the Carolina attack. Shaw is a better quarterback when he plays at home, so we'll see how he fares this weekend in the Sunshine State.

LSU at Georgia: This game has huge SEC and national title implications, as the Tigers and the Bulldogs are positioned to control their own destinies with a win. Tigers running back Jeremy Hill had a monster game last week against Auburn, and quarterback Zach Mettenberger has the team's aerial attack thriving. Meanwhile, the Bulldogs have perhaps the nation's best running back in Todd Gurley and a quarterback in Aaron Murray who finally answered the critics with a strong performance against South Carolina. Whichever team's defense causes a key turnover could come out on top.

Oklahoma at Notre Dame: The Sooners were at their best offensively the last time we saw them, as Blake Bell excelled against Tulsa after taking over the starting duties at quarterback. OU will test a Notre Dame defense that has not been quite up to par this season, especially against the pass. Meanwhile, the Sooners look much improved defensively, especially along the line and at linebacker. The Fighting Irish were much better on both sides of the ball during their 30-13 win over OU last year, but Bob Stoops' squad ranks among the Top 20 nationally in total yards allowed and third-down conversion percentage. Can Tommy Rees and the Irish bounce back after a sluggish offensive game last week against Michigan State?

Iowa at Minnesota: The Golden Gophers rushed for six touchdowns and 353 yards in their 43-24 win against San Jose State last week despite not having starting tailback Donnell Kirkwood, so the Hawkeyes must be ready to stop the run. Redshirt freshman quarterback Mitch Leidner rushed for four of those touchdowns while stepping in for starter Philip Nelson in Jerry Kill's read-option offense. Nelson should be back this week against Iowa, which put together its best performance in a very long time last week in a 59-3 win over Western Michigan. This Floyd of Rosedale matchup is intriguing.

Ole Miss at Alabama: Laquon Treadwell is not Mike Evans, but the true freshman receiver will test a Crimson Tide secondary that is the weakest part of their strong defense. Nick Saban used a lot of young players in his defensive backfield with veterans Deion Belue and Jarrick Williams sitting out last week because of injuries. So it will be interesting to see who is on the field the most against a fast-paced Rebels offense that features Treadwell and Donte Moncrief at receiver, reliable Evan Engram at tight end and Bo Wallace, who looks improved from his solid 2012 campaign, at quarterback.

Texas A&M at Arkansas: We know about the Aggies' dominant offense, which will challenge a young Razorbacks defense that has yet to really be tested. But how will A&M's leaky defense contend with a Hogs rushing attack featuring the two-headed monster of Alex Collins and Jonathan Williams, both of whom have over 400 yards each on the ground? Will Hogs quarterback Brandon Allen be back in the lineup after getting injured over a week ago?

Arizona at Washington: Just how good are the Wildcats? We will find out when they travel to Seattle to face a Washington team that looks as if it could be primed for a rise up the league standings. Keith Price and the Huskies offense should be able to move the football against Rich Rodriguez's defense, but what tricks will Justin Wilcox have as his defense tries to contain Rich Rod's offense?

Florida at Kentucky: Fourth-year junior Tyler Murphy takes over as the starting quarterback for the Gators after Jeff Driskel broke his fibula less than six minutes into last week's game. The longtime backup settled into the role against Tennessee, but how effective can he be for UF longterm? He'll be okay this week against the Wildcats because Mark Stoops' squad has questions of its own under center.

Wisconsin at Ohio State: Buckeyes quarterback Braxton Miller has been cleared to play for the team's first Big Ten game of the season after missing the past two contests with a knee injury. Kenny Guiton has performed beautifully in his place, tossing a school-record 12 touchdowns over the past three weeks. Will Miller be rusty? The Badgers, meanwhile, put their controversial loss to Arizona State in the distant past with a thorough victory over Purdue last week. Their ground game is overwhelming, which will challenge the Buckeyes' defensive front. But quarterback Joel Stave must play turnover-free.

Stanford at Washington State: The Cardinal overwhelmed Arizona State last week, but they took their foot off of the gas pedal, which probably didn't delight the coaching staff. While the Cougars were able to steal a road win over USC a few weeks ago, Connor Halliday will be tested by one of the best defenses in the country.

Cal at Oregon: The tough early season slate for Sonny Dykes and the Golden Bears continues as they travel to Eugene to take on a Ducks squad that had a bye last Saturday. Nick Aliotti's defense never gets enough credit, but the unit will be tested by the Bear Raid offense. But the Cal defense should be overwhelmed by Mark Helfrich's offensive juggernaut, which is led by Heisman Trophy contender Marcus Mariota.

USC at Arizona State: This huge early season Pac-12 South matchup will show us a lot about just how good the Trojans and the Sun Devils will be this fall. Lane Kiffin's squad already has a conference loss, falling at home to Washington State in embarassing fashion. Meanwhile, Todd Graham's team was blown out by Stanford on the road last week, scoring some late touchdowns to make it look respectable. Will the Trojans take some risks on offense, and will Sun Devils quarterback Taylor Kelly start to play more efficient?