An early glance at Week 5

Four weeks of the college football season are in the books, and September is about to come to a close.

This Saturday marks the start of the first weekend in October, which means the 2011 campaign is ready to get very interesting.

There are plenty of huge games on the slate, so let's take an early look at what to expect when we grab our seat on the couch in front of the television in four days.

Texas A&M vs. Arkansas (Cowboys Stadium): Which team will bounce back after disappointing efforts in Week 4? In College Station, the Aggies imploded in the second half and fell once again to Oklahoma State, a team that has had their number in recent seasons. Meanwhile, the Razorbacks were blown out by Alabama in Tuscaloosa. Of course, both teams have plenty to play for the rest of the season. Which squad will have the shorter memory? The Hogs claimed a 7-point victory last season behind the arm of Ryan Mallett, while the Aggies struggled under Jerrod Johnson. This season, the slight edge at quarterback may go to A&M despite Tyler Wilson showing so much toughness in the loss to the Tide. However, Aggies signal-caller Ryan Tannehill really struggled in the second half last week against the Cowboys. Running backs Cyrus Gray and Christine Michael must give A&M a balanced offensive attack.

Mississippi State at Georgia: This is an incredibly huge cross-division game in the SEC between the league's two Bulldogs, as the loser will be sitting with three losses at the end of the day and may not be able to recover. Georgia took care of business this past weekend in Oxford against Ole Miss, and Mark Richt's squad seems primed to play its best football of the season. Meanwhile, Dan Mullen's team had to survive in overtime against Louisiana Tech, and their offense has really struggled since the loss to LSU. With this being a potential make-or-break season for Richt, a win over a preseason sleeper could be huge to give the 'Dawgs new life. 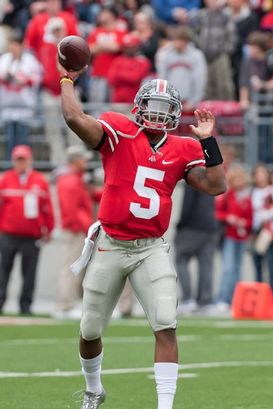 Michigan State at Ohio State: This isn't the biggest Big Ten game of the weekend (more on that one in a bit), but this clash in Columbus could be a big tone-setter with both the Spartans and Buckeyes each having a nonconference loss. OSU true freshman quarterback Braxton Miller will face a big test against a sound MSU defense, and the Buckeyes will play their final game without DeVier Posey and Boom Herron -- two offensive players they desperately could use right now. Meanwhile, Spartans quarterback Kirk Cousins has the firepower on offense to quiet what should be a raucous crowd for this conference opener.

Clemson at Virginia Tech: How good is Chad Morris' new offense in Death Valley? Well, we'll get a good look at how efficient Tajh Boyd, Sammy Watkins and Co. can be against Bud Foster's tenacious defense in Blacksburg against a Hokies squad that has yet to play its best football. Meanwhile, can Virginia Tech quarterback Logan Thomas break out and have a big game to match the preseason hype? The Tigers come in at 4-0 and are one of the big early national surprises of the season.

Alabama at Florida: Remember when this matchup was supposed to become the best rivalry in college football, or at least the most entertaining in the SEC? The Tide has had the Gators' number the last few years, but Will Muschamp's team has started off the 2011 season strong after UF suffered through a disappointing 2010 campaign. Can the new-look Gators hang for four quarters with the Crimson Tide, especially after the performance by Nick Saban's bunch last week? We saw what Kirby Smart's defense was able to do to Arkansas quarterback Tyler Wilson and that Hogs offense this past Saturday, so UF signal-caller John Brantley should make reservations for some post-game ice packs and tub time.

Nebraska at Wisconsin: Camp Randall is the place to be this weekend as Nebraska plays its first conference game as a member of the Big Ten. Former N.C. State three-year starting quarterback Russell Wilson is receiving a lot of Heisman love, and the Badgers could end up being true national championship contenders. But they will have to get by the Black Shirts, a group that hasn't quite played up to expectations yet. Meanwhile, Nebraska dual-threat signal-caller Taylor Martinez is going to have to make a play or two downfield in the passing game if the Cornhuskers want to escape Madison with a win.

Other matchups to keep an eye on:

Auburn at South Carolina: The Tigers may have one loss, but a win over Steve Spurrier's Gamecocks could really serve as a big boost, especially considering the tough games they have left on their schedule. But Auburn's woeful defense must be able to force Gamecocks quarterback Stephen Garcia into mistakes. That likely shouldn't be a problem.

Baylor at Kansas State: This is a tricky game for the Bears, as the Wildcats scored a victory last weekend over Miami and is playing surprisingly well. However, Baylor has RG III, a rare talent who has more touchdowns than incompletions on the season.

Southern Methodist at TCU: Can the Horned Frogs' inexperienced defense slow down this Mustangs offensive attack?

Texas at Iowa State: If the Longhorns really have their quarterback issue settled, this could be a team to be reckoned with in the Big 12. Meanwhile, Paul Rhoads' Cyclones keep finding ways to win.

Washington at Utah: Keith Price, who took over for Jake Locker in Seattle, is playing well for the Huskies at quarterback. But can Nick Holt's defense put the clamps on the Norm Chow-led Utes offense?