An early glance at Week 6

Five weeks of the 2013 college football season are in the books, and we're starting to slowly see a bit of separation of pretenders from contenders.

Let's take a quick look at what could be in store for the best contests of Week 6.

Texas at Iowa State: With longtime Longhorns athletic director DeLoss Dodds stepping down in August 2014 and the team not resembling a BCS national championship contender, head coach Mack Brown's future is unknown. The 'Horns had a week off after a strong effort in a win over Kansas State, so they'll look to continue that momentum against a Cyclones squad that beat Tulsa last week. Paul Rhoads has been good for one big win each year the last few seasons, so could it be this week?

UCLA at Utah: The Bruins will travel to Salt Lake City for their Pac-12 opener to face a Utes team that already has a conference loss. Utes receiver Dres Anderson has recorded three straight 100-yard games, while quarterback Travis Wilson is No. 15 nationally in passing efficiency. Meanwhile, Brett Hundley is throwing for over 280 yards per game, and Jordon James is a legit No. 1 running back. Both teams were off last weekend and feature strong offenses. This should be a nice Thursday night treat.

BYU at Utah State: These teams combined for just nine points in a 6-3 Cougars win last season, and Taysom Hill and Chuckie Keeton are both back under center for their respective teams. Hill will not beat you with his arm, but he has with his legs in the wins over Texas and Middle Tennessee. Keeton, meanwhile, has performed admirably even in losses to Utah and USC. 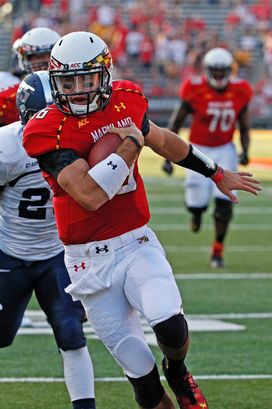 US PRESSWIREC.J. Brown and the Terps have a chance to gain some national respect against FSU.

Maryland at Florida State: The Terrapins have a chance to show the nation that they are legit when they travel to Tallahassee to take on a Seminoles team that had trouble stopping Boston College's offense last week, as the Eagles scored their most points in an ACC game in nearly four years. While everyone knows about Jameis Winston, the Terps have a productive quarterback of their own in C.J. Brown. Maryland hasn’t beaten Florida State in Doak Campbell Stadium ever, though, as the Terps have lost all 11 games there.

Illinois at Nebraska: The major question is whether Tim Beckman's Illini can continue to score points against better competition, especially after it struggled to do so in their loss to Washington. The Cornhuskers may not offer up much resistance this week defensively, and Bo Pelini's squad may be without dual-threat quarterback Taylor Martinez again.

Michigan State at Iowa: The Spartans enjoyed a bye last week, and it looks like head coach Mark Dantonio is comfortable with Connor Cook as the starting quarterback. The run game is fine, but the offensive line will be tested by an Iowa front that was spirited last week in its win over Minnesota.

Georgia Tech at Miami (FL): The Yellow Jackets will look to get back to their productive offensive ways after being stifled by Bud Foster's Virginia Tech defense. The Hurricanes played a sloppy game in their win over South Florida last week, but they still managed to cruise to victory. We'll see if they can play a more crisp game against a team that desperately needs a win if it has any chance of playing for an ACC title.

Minnesota at Michigan: All eyes will be on whether Wolverines quarterback Devin Gardner can clean up his game following two subpar efforts before the team's bye week. Meanwhile, the Gophers were dreadful in their homecoming contest against Iowa. Quarterback Philip Nelson and the running backs struggled, and it won't be any easier against Greg Mattison's defense.

Kansas State at Oklahoma State: The Cowboys are coming off of a disastrous loss to West Virginia in Morgantown, a game that was most shocking because of their offensive ineptitude. Quarterback J.W. Walsh was inefficient, and the Pokes averaged less than 3 yards per carry. This week Mike Gundy's squad gets a K-State team that employs a two-quarterback system, but Daniel Sams only has four passing attempts on the year.

LSU at Mississippi State: The Bulldogs enjoyed a bye week after their 62-7 win over Troy, a game in which quarterback Dak Prescott impressed. But they will be going up against a salty Tigers team that is coming off of a heartbreaking road loss to Georgia. There aren't many quarterbacks playing as well as Zach Mettenberger, so it will be tough for Dan Mullen's team to thwart the Tigers' balanced offensive attack.

TCU at Oklahoma: The Horned Frogs finally were able to enjoy an offensive explosion last week, but it came in the fourth quarter against SMU, as they scored 31 points in the final frame against the Mustangs. But this week they will go up against a Sooners defense that is playing fast, loose and very well. Meanwhile, the Frogs could be without star cornerback Jason Verrett and defensive end Devonte Fields due to injuries.

Arkansas at Florida: Tyler Murphy has played well since taking over for the injured Jeff Driskel at quarterback for the Gators, and the running game will remain their bread and butter. Meanwhile, the Razorbacks put a scare in Texas A&M last week following their loss to Rutgers. Brandon Allen played well in his return at quarterback, but the defense is an issue. If the run 'D' can hold up against UF, it will force Murphy to make plays through the air.

Ole Miss at Auburn: The Rebels should be able to find the end zone against the Tigers a week after they were shut out by Alabama. I would expect this game to be a bit of a shootout, especially if both up-tempo offenses show up on The Plains. Hugh Freeze's team gave up 254 rushing yards to 'Bama, so Gus Malzahn should be salivating over the possibility of chunks of yardage for his offense coming off of the team's bye.

Arizona State vs. Notre Dame: The Sun Devils and the Fighting Irish meet at AT&T Stadium in Arlington, TX. Todd Graham's squad will be making the 13th attempt ever to defeat USC and Notre Dame in consecutive weeks. No program has been able to do so in the past. The Irish will be challenged by Sun Devils tailback Marion Grice, who has 12 touchdowns this season and is a threat as a pass-catcher as well, and receiver Jaelen Strong, who has 433 yards on 31 receptions. Will ND quarterback Tommy Rees be able to avoid pressure from that ASU front? And can he protect the football?

Missouri at Vanderbilt: The James Franklin Bowl takes place in Nashville, and we'll start to see just how good the Tigers are after feasting on their nonconference foes. They'll need their defense, led by cornerback E.J. Gaines, to continue to play well against a Commodores offense led by Jordan Matthews that can score points.

Ohio State at Northwestern: The Buckeyes face perhaps their toughest test until the regular-season finale at Michigan when they travel to Evanston to take on Northwestern under the lights at Ryan Field. How will Urban Meyer repl ace safety Christian Bryant, who was lost for the season in the win over Wisconsin? The good news is that the young Buckeyes defense held up against the Badgers' ground game. Wildcats running back/returner Venric Mark is expected to play this week, which is a big boost for NU. Can Pat Fitzgerald's squad notch the victory in the program's biggest game in a long while?

Washington at Stanford: Steve Sarkisian's Huskies have a chance to make a dent in the BCS title hopes of the Cardinal, although David Shaw's squad has not forgotten about the Huskies' 17-13 upset last year. However, that Stanford team did not have Kevin Hogan under center. It will be interesting to see what Huskies defensive coordinator Justin Wilcox has up his sleeve for Hogan. Meanwhile, UW tailback Bishop Sankey is the nation’s No. 1 rusher at 151.8 yards per game, and quarterback Keith Price is No. 12 nationally in passing efficiency. Can the Cardinal 'D' hold up?