An early glance at Week 7

Six weeks of the 2013 college football season are in the books, and the path to the BCS national title game remains cluttered.

Let's take a quick look at what could be in store for the best contests of Week 7.

Rutgers at Louisville: Teddy Bridgewater gets a chance to have a Heisman moment on a national stage, and it's one of the few times this year that the Cardinals will be in the spotlight. While the Scarlet Knights barely hung on to beat SMU this past week, they have the firepower to score if the game turns into a shootout. But will Charlie Strong's defense put up enough resistance? 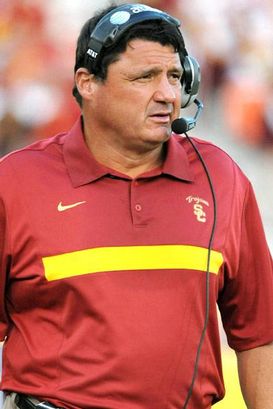 US PRESSWIREEd Orgeron will be USC's head coach the remainder of the season.

Arizona at USC: The Trojans will play their first game since Lane Kiffin was dismissed as head coach, as Ed Orgeron has taken over for the remainder of the season. New offensive play-caller Clay Helton should be getting Silas Redd back after a knee injury shelved him for the first part of the season, but Tre Madden (583 rushing yards) and Justin Davis (five touchdowns) have filled in admirably. Expect Helton to let Cody Kessler take some shots down the field if star receiver Marqise Lee is healthy enough to play. Meanwhile, Rich Rodriguez's Wildcats are trying to notch their first Pac-12 win after losing at Washington in late September. Both teams are coming off of a bye.

Missouri at Georgia: The Bulldogs will be hosting the Tigers without many of their best playmakers after running back Keith Marshall and receiver Justin Scott-Wesley were lost for the rest of the season. Receiver Michael Bennett has already been ruled out of this week's game, and star running back Todd Gurley is considered "doubtful" by head coach Mark Richt. Of course, receiver Malcolm Mitchell was already lost for the season in the opener. More pressure now falls on receiver Chris Conley (20 catches for 318 yards) and freshmen tailbacks J.J. Green and Brendan Douglas. Mizzou, meanwhile, is coasting with a healthy James Franklin at quarterback, productive playmakers around him and a no-name defense that is playing sound.

Oklahoma vs. Texas: The Red River Rivalry in Dallas will have an even brighter spotlight this year with questions about Longhorns head coach Mack Brown's future and the lopsided losses the 'Horns have been handed by the Sooners in recent years. David Ash will once again be sidelined, so Case McCoy will be facing a speedy and active Sooners front, though it lost linebacker Corey Nelson for the year in the win over TCU last week.

South Carolina at Arkansas: Will Gamecocks defensive end Jadeveon Clowney play, and how will Connor Shaw perform away from Williams-Brice? Four of South Carolina's last five losses have come on the road, and the team has just two wins in ten attempts at Arkansas. The Razorbacks are winless in SEC play, and quarterback Brandon Allen struggled against the tough Florida defense last week. He should be able to find some openings against the Gamecocks defense, though. This is a tricky spot for Steve Spurrier's squad.

Florida at LSU: Both teams are trying to hold onto their BCS national title hopes, as the loser will be handed their second loss of the season. Zach Mettenberger and the Tigers' offensive attack will face their first real tough SEC test of the season, while Tyler Murphy will go up against a talented but young defense that has lost a lot of bite from last year.

Baylor at Kansas State: The Wildcats are staring an 0-3 Big 12 start in the face unless Bill Snyder and his defense can cook something up to stop the Bears' ridiculous offensive attack. Turnovers plagued K-State in its loss to Oklahoma State last week, with Daniel Sams throwing three interceptions and losing a fumble.

Northwestern at Wisconsin: The Wildcats need to avoid a letdown after their near-win over Ohio State last weekend. Madison is a tough environment to endure after a heartbreaking loss, especially with the Badgers desperate to avoid their third loss of the young season.

Oregon at Washington: The Huskies proved that they are close to being national players once again, but they are not quite in the same class as Stanford. Steve Sarkisian's squad gets a chance to show that it is in Oregon's league this week, but eliminating penalties is of primary concern. It will be interesting to see what Huskies defensive coordinator Justin Wilcox has in store for that Ducks offense, led by Heisman contender Marcus Mariota.

Michigan at Penn State: The Nittany Lions will be looking to rebound from their first-ever loss to Indiana last week, and they'll try to regain confidence in their ground attack after being held to just 70 yards on 38 rushes against a team with a porous run defense. Meanwhile, the Wolverines had a conservative offensive game plan in its win over Minnesota, allowing Devin Gardner to play turnover-free.

Texas A&M at Ole Miss: Johnny Manziel led an Aggies rally from a 10-point fourth-quarter deficit last year to beat the Rebels in Oxford. A&M did turn the ball over six times in that contest, however. This year, Kevin Sumlin's squad will face an Ole Miss team that is trying to avoid its third straight defeat.

Oregon State at Washington State: The Beavers and the Cougars meet in a huge Pac-12 game that is not getting enough attention nationally. Can Mike Leach get his team to 5-2? Or will Mike Riley's team win its fifth straight?