Arkansas (3-1) and Texas A&M (3-1) will renew acquaintances Saturday afternoon at Cowboys Stadium — the second meeting in a 10-year deal to play annually at the home of the NFL’s Dallas Cowboys.

The former Southwest Conference rivals first met in 1903 and played every year from 1934-91 before the Razorbacks left for the SEC. Arkansas leads the all-time series 39-24-3, including a 47-19 thrashing last season. In that game, Razorbacks quarterback Ryan Mallett threw four touchdown passes and rallied the Hogs from a 10-0 deficit.

Bobby Petrino’s team had a bye last week — a much-needed one — after the second-half collapse against defending national champion Alabama. Meanwhile, Mike Sherman’s Aggies are trying to put aside an emotional contest of their own. Last Thursday night, quarterback Jerrod Johnson and Co. fell 38-35 to Oklahoma State in a roller-coaster, turnover-filled battle in Stillwater.

Unquestionably, both teams will be looking to take out their frustrations in this nonconference tilt.

The defense was the biggest concern for Arkansas entering 2010, and the Hogs have played much better on that side of the ball thus far. With the exception of the game against the Tide, Arkansas has been stout against the run, and the team is only yielding 297 total yards per game. The pass defense, however, is allowing 13.5 yards per pass completion. That doesn’t bode well against the big risk/big reward Aggies signal caller.

Johnson, the first of four consecutive dual-threat quarterbacks the Hogs will face over the next month (Auburn’s Cameron Newton, Ole Miss’ Jeremiah Masoli and Vanderbilt’s Larry Smith are the others), certainly has the green light from the coaching staff to chuck the ball all over the field. But by turning the ball over 10 times in his past two games after throwing just eight interceptions all of last year, will the Aggies get conservative? After all, while the Razorbacks may give up some yards through the air, they do have more interceptions than touchdowns allowed.

If Johnson plays tentatively and conservatively, A&M won’t be able to compete for a full four quarters.

For the Razorbacks, running the football consistently still remains their biggest question mark. While they can beat most teams with Mallett spreading the ball around to their various receiving weapons, an unbalanced offense will leave them vulnerable to being shut down like they were in the second half against ‘Bama.

After his 42-yard effort on just six carries against the Tide, look for Knile Davis to get an opportunity to carry the load when the Hogs do run the ball. Petrino and offensive coordinator Garrick McGee liked his decisiveness and aggressiveness two weeks ago. Losing Dennis Johnson to a bowel injury gives the 6-foot, 220-pounder a chance to establish himself as a feature back. 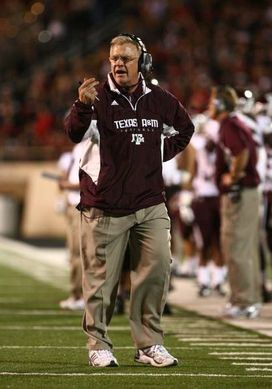 ICONCan Mike Sherman's Aggies bounce back from their loss to the Pokes?

The rushing attack will also be crucial to keep A&M’s defense on its toes after the unit landed plenty of shots on Oklahoma State quarterback Brandon Weeden last week. If Arkansas is intent to throw most of the time, expect first-year coordinator Tim DeRuyter to pressure all night out of the Aggies new 3-4 scheme.

Can Arkansas regain some lost confidence with Auburn looming on the schedule next week, or will Johnson limit his mistakes and gain some revenge for last year’s throttling?

Keep in mind that the senior quarterback set a Big 12 record last season by throwing 242 consecutive passes without a pick.

This is the type of game that makes me miss the old SWC. Glad to have this series back on the schedule for the next eight years following Saturday's contest.