Andersen is the perfect fit for Wisconsin

Wisconsin athletic director Barry Alvarez has found his replacement for Bret Bielema, as Utah State's Gary Andersen will become the new head coach at Wisconsin, as first reported by The Wisconsin State Journal.

Despite the Aggies releasing a statement on November 30 quoting Andersen stating that he planned on staying on as Utah State's head coach in light of various rumors linking him to bigger jobs, Andersen is headed to Madison to take over the Badgers program. 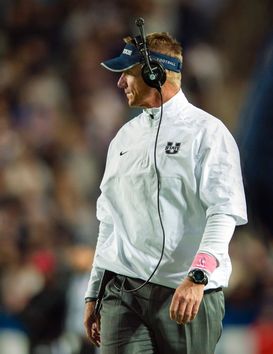 US PRESSWIREGary Andersen has been selected by AD Barry Alvarez to be Wisconsin's new head coach.

Andersen, who burst onto the national scene last fall when his Aggies nearly beat defending BCS national champion Auburn at Jordan-Hare Stadium and whose team lost to Wisconsin in Madison this year when his kicker missed a potential game-winning 37-yard field goal, led Utah State to a bowl game last year for the first time since 1997. He won 11 games this year, including the WAC title, finishing off the strong campaign with a 41-15 win over Toledo this past Saturday in the Famous Idaho Potato Bowl.

While his offense will change at Wisconsin, as the run-oriented Power O will remain in Madison, Andersen helped develop dynamic dual-threat signal-caller Chuckie Keeton over the last two seasons at Utah State. He also oversaw a stout defense that helped the Aggies to their 11 wins. And keep in mind that Andersen, who posted a 26-24 mark in four seasons in Logan, was the defensive coordinator at Utah under Kyle Whittingham when the Utes knocked off Alabama in the Sugar Bowl following the 2008 season.

Just like Bielema and Alvarez, Andersen will bring a defensive background to Madison, where the 48-year-old head coach will inherit an experienced team that is set to play in the Rose Bowl for the third straight season. Andersen does not have any connections to the Midwest, however, so it will be interesting to see if he retains any Wisconsin assistants or goes out and gets a top recruiter with Big Ten and Midwest ties. But what Andersen does do is evaluate and develop players very well, so he will have no problem working with the three-star recruits or less heralded players that fall into the Badgers' laps.

In a search where names as big as Boise State’s Chris Petersen were discussed and other candidates such as Miami's Al Golden and Iowa State's Paul Rhoads reportedly declined Alvarez's overtures, landing Andersen is quite the coup for the Wisconsin AD. He gets a proven head coach with a strong track record who will have no problem with not overhauling the brand of football we've been accustomed to seeing in Madison.