Another disruption for Georgia's retooled defense

While too much stock should not be put into what happens during any spring game, Georgia head coach Mark Richt, defensive coordinator Todd Grantham and the rest of the staff had to be encouraged by how the retooled Bulldogs defense finished their spring season.

Perhaps no other unit in college football lost more from its 2012 group than Grantham's unit. Linebackers Jarvis Jones, Alec Ogletree and Cornelius Washington, defensive tackles John Jenkins, Kwame Geathers and Abry Jones, safeties Bacarri Rambo and Shawn Williams, and cornerback Sanders Commings are all gone. In all, the ‘Dawgs lost 12 players on defense who started at least two games for them in 2012.

But the Bulldogs return a lot of talent to their 3-4 scheme in 2013. And if Richt's squad has any plans on winning the SEC East crown and getting back to Atlanta for the SEC championship game, a defense that is returning just three starters and was the main focus during the team's spring drills must be able to compete at a high level to complement what should be a strong offense.

That task just became more difficult in the team's season opener against Clemson, however, as the 'Dawgs will be without sophomore strong safety Josh Harvey-Clemons after a marijuana-related incident in a campus dorm. The Bulldogs' defensive MVP in spring practice, Harvey-Clemons will miss the game against the Tigers on August 31, which will make stopping Tajh Boyd and the high-powered Clemson offense much tougher. 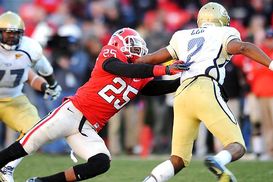 US PRESSWIREJosh Harvey-Clemons will miss the season opener against Clemson.

Unfortunately, the Bulldogs are becoming used to rocky offseasons, with stars such as as Bacarri Rambo and Alec Ogletree encountering various troubles in the past.

Harvey-Clemons, a former five-star recruit, played in all 14 games last season and recorded a career-high three tackles against Florida Atlantic. He made his biggest impact on special teams in 2012, but he was slated to be one of the Bulldogs' starting safeties this fall after a strong spring.

The 6-5, 207-pounder is being counted on to be a key cog in the team's revamped secondary, which will be tested by Clemson's no-huddle, hurry-up attack coordinated by Chad Morris. The 'Dawgs lost all four starters from their secondary, but last year's rash of suspensions and injuries allowed their backups to log quality playing time. While he is young, Harvey-Clemons was expected to be a leader of a greenish defense. So his absence in the tough opener is huge, especially because a loss could really damage Georgia's hopes to raise the crystal football. Grantham had planned to really maximize the athletic skill set of Harvey-Clemons this year, using him at both strong safety and outside linebacker. So he would have been very difficult for Clemson to game plan for in the opener.

With Harvey-Clemons out, junior Corey Moore will likely start at strong safety. He appeared in all 14 games last season with one start but does not possess the big-play ability of JHC. Other players expected to be key components of Grantham's unit will now be leaned on a bit harder in the opener against the Tigers, including outside linebacker Jordan Jenkins, who is poised to be the next standout pass-rusher for this program after registering five sacks and eight tackles for loss playing opposite Jarvis Jones last season.

While there is still plenty for the 'Dawgs to work on over the summer and in preseason camp, Richt and Grantham definitely have a better feel of what they have on defense following the team's spring game. The question now remains whether it will be good enough without Harvey-Clemons in Week 1.