Iowa suffered yet another tough blow to its depleted backfield when head coach Kirk Ferentz announced Tuesday that freshman running back Barkley Hill will miss the 2012 season after suffering a knee injury during Saturday’s practice.

Hill will have ACL reconstruction surgery later this week, a similar procedure to the one administered to freshman defensive back Ruben Lile last week. Lile will also miss the upcoming campaign. 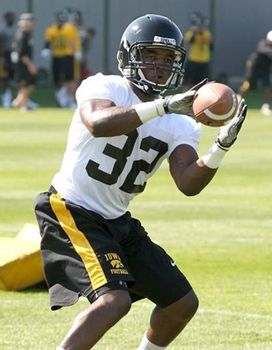 Damon Bullock is one of the few bodies left in Iowa's depleted backfield.

Losing the 6-foot, 210-pound Iowa native is just the latest blow to a Hawkeyes backfield that has suffered through a tumultuous offseason.

De'Andre Johnson was dismissed from the team after two run-ins with police, so backfield depth in Iowa City has been a major concern throughout the offseason for Ferentz and new offensive coordinator Greg Davis.

Class of 2012 product Greg Garmon ran into some off-the-field trouble as well, but his presence is crucial now as the offensive staff will have to rely on him and Damon Bullock this fall to carry the slack. The question is whether they can give the Hawkeyes some semblance of Big Ten-quality production, especially against the league's better run defenses. Nate Meier, a 6-2, 235-pound athlete who has been practicing at running back because of the team's lack of depth, could also see his timeline accelerated, as well as true freshman Michael Malloy and junior walk-on Andre Dawson.

Hawkeye fans should expect to see Davis put games into the hands of quarterback James Vandenberg more often than not this fall, perhaps utilizing the short-passing game to serve as a de facto run game, at least early in the season.