Are you ready for an LSU-Alabama rematch?

On a wild Friday night in Ames, the BCS national championship picture became a lot clearer.

Iowa State ended No. 2 Oklahoma State's undefeated season, recording a victory over a Top 2 opponent for the first time in school history by erasing a 17-point deficit to notch a 37-31 win in double overtime. With the loss, the Cowboys were all but knocked out of the race for a berth in the BCS title game. Quarterback Brandon Weeden likely lost out on the Heisman Trophy as well. 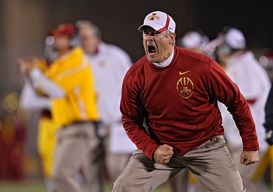 ICONPaul Rhoads led the Cyclones to a huge upset win over the Pokes on Friday night.

The Pokes' loss also negatively affects Oklahoma, which was hoping Mike Gundy's squad remained unbeaten heading into its Bedlam Game in order to gain a boost in the BCS standings with a win. So while the BCS is a chaotic system, it became less messy with the Cyclones' win Friday night as the two Oklahoma schools are now likely out of the race.

Meanwhile, Oregon certainly is deserving of a rematch with LSU if the Ducks run the table and the Tigers remain unbeaten. However, even with wins over USC and the Pac-12 South winner in the league's title game, it will be difficult for Chip Kelly's squad to pass up a one-loss Alabama team in the final BCS standings unless the Crimson Tide trips up against Auburn.

So barring any more upsets, LSU and Alabama are likely on a collision course for a rematch in New Orleans. This would entail the Tide playing for the national title without having defeated LSU in its regular-season matchup or winning the SEC. Of course, during the BCS era Nebraska and Oklahoma snuck into the title game without winning a conference title.

Certainly, Friday was a crazy night in the world of college football. And if you're Boise State head coach Chris Petersen, you certainly have to be sick to your stomach that the Broncos' season could have potentially been special if that kick last week against TCU went through the uprights.