Twelve weeks of the 2013 college football season are in the books, and the path to the BCS national title game continues to get more narrow, as Alabama and Florida State appear to be destined for Pasadena barring upsets.

Let's take a quick look at what could be in store for the best contests of Week 13.

Michigan State at Northwestern: At the beginning of the season, this game looked like it could be for the right to play Ohio State in the Big Ten championship game. Now, the Spartans are the favorite to land in Indy while the Wildcats are trying to get their first league win after four straight tough losses. Mark Dantonio's squad won't be overlooking Pat Fitzgerald's team with so much at stake, and it's just hard to imagine the 'Cats being able to move the football enough against Pat Narduzzi's defense.

Oklahoma at Kansas State: The Wildcats are playing very good football now that their offense has come together, winning four in a row. And keep in mind that Bill Snyder's squad was the only one to have really put a scare in Baylor this fall. We don't exactly know who will start at quarterback for the Sooners, and don't expect head coach Bob Stoops to reveal a starter before gametime. Trevor Knight. Blake Bell or Kendal Thompson could all play. What is certain is that OU needs to decide on one and stick with him if the Sooners want to close the season strong. Damien Williams will miss this game, though, and it just seems that K-State's roll may continue against an OU team that is a bit out of sorts. 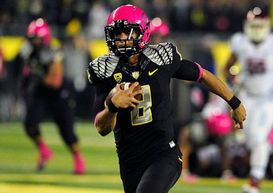 Marcus Mariota and the Ducks have a chance to win the Pac-12 North after all.

Oregon at Arizona: The Ducks can win the Pac-12 North division if they win out, so there is still plenty to play for despite the team's loss to Stanford a few weeks ago. A road game against Arizona is a bit tricky, though, especially because Nick Aliotti's defense will have to contain running back Ka'Deem Carey, who is second in the country at 150.3 yards per game on the ground. Of course, the Wildcats will have to stop a Ducks offense that is still very dangerous despite Marcus Mariota's left knee hampering his ability to run. Mariota, by the way, holds the Pac-12 record of 353 passes without an interception.

Texas A&M at LSU: Johnny Manziel is continuing to gather momentum in his quest to become just the second repeat Heisman Trophy winner, and a big outing against the Tigers in Death Valley on a national stage could make a lasting impression on the voters. Meanwhile, the Tigers are coming off of a bye week following their emotional loss to Alabama. And it will be interesting to see how focused Les Miles' squad is with a BCS at-large berth no longer an option. Manziel was contained in the second half of last year's meeting, but this isn't the same LSU defense. The Tigers will score some points against a porous Aggies defense, but Manziel should be the difference.

Wisconsin at Minnesota: The Badgers are trying to close out the regular season strong in order to be considered for one of the BCS at-large berths, while the Gophers are trying to extend their Big Ten winning streak to five games in the battle for Paul Bunyan's Axe. Minnesota has played some tough foes this year, but no team presents a challenge quite like the Badgers and 1,000-yard rushers Melvin Gordon and James White, who are probabaly still running wild against Indiana.

BYU at Notre Dame: The ND defense lost another player when it was announced on Thursday that nose guard Louis Nix III would miss the rest of the season with a torn meniscus, and linebacker Ishaq Williams' status remains in flux after he missed two games with an ACL injury. This ND defense will be tested by a Cougars offense featuring major run threat Taysom Hill at quarterback and tailback Jamaal Williams. As always, the Irish will need to get strong play from Tommy Rees at quarterback. Can the Cougars force the Irish signal-caller into some critical mistakes? It is supposed to be cold and blustery with some lake effect snow on Saturday in South Bend.

Boston College at Maryland: This is a very intriguing ACC matchup of teams that are headed to the postseason. Steve Addazio has done a magnificent job in his first season in Chestnut Hill, and star senior running back Andre Williams should get a few Heisman Trophy votes for being the center of the offense. He is on a ridiculous run, one in which saw him go for an ACC-record 339 yards on the ground last week. He is just 190 yards shy of 2,000 for the season and is a big reason why the Eagles have won three straight. Meanwhile, the Terps notched a win over Virginia Tech last week. But injuries have really affected this squad, and the Eagles' ground game could wear down the Terps' defense over four quarters. However, Maryland is ranked No. 30 in the country against the run.

Nebraska at Penn State: The Cornhuskers and the Nittany Lions will both have freshmen under center at Beaver Stadium, as redshirt freshman Tommy Armstrong and true freshman Christian Hackenberg will lead the offenses for the Cornhuskers and the Nittany Lions, respectively. Turnovers have been a concern for Armstrong, but he's endured rough play from his injury-riddled offensive line. PSU doesn't have its traditional strong defense this year, but the Huskers still could be overmatched trying to protect Armstrong on Senior Day.

Utah at Washington State: The Cougars have been unable to win a Pac-12 home game this year, while the Utes have been unable to notch a conference win on the road. Mike Leach needs one more victory to take Wazzu bowling in his second season, but he'll need quarterback Connor Halliday to protect the football better, as he has thrown at least one interception in every game this fall.

Arizona State at UCLA: Todd Graham and Jim L. Mora have elevated their programs in their short stints in Tempe and Westwood, respectively, and both squads are hoping to claim the Pac-12 South title this year. The win by the Bruins in Tempe last year vaulted them into first place en route to a division crown. Both Taylor Kelly and Brett Hundley were involved in a shootout in that meeting, but both defenses may be a bit more stingy this time around. UCLA has to be able to contain Sun Devils running back Marion Grice, who has found the end zone 20 times this season. Offensively, the Bruins have found a stud of their own at running back: Myles Jack. Yes, the star freshman linebacker has been beastly on offense the last two weeks. But this Bruins offensive line featuring three true freshmen will be facing a veteran Sun Devils front seven that has a ferocious pass rush. If ASU wins, it will win the South. If UCLA wins and beats USC next week, it will be the South champs for the third straight year.

Missouri at Ole Miss: The Tigers have not had quarterback James Franklin healthy for about a month, but the veteran signal-caller is back for the team's visit to Oxford. Before the injury, Franklin passed for 1,577 yards and 14 tou chdowns against just three interceptions, and he was his usual threat with his legs as well. Gary Pinkel's squad will be in the SEC Championship game if it can win its next two against Ole Miss and Texas A&M. But one slip-up would send South Carolina to Atlanta. Meanwhile, the Rebels have been hot as of late, as Hugh Freeze's team has won four in a row. But will Ole Miss be able to keep quarterback Bo Wallace protected against Mizzou's strong defensive line?

Baylor at Oklahoma State: Coming off of their third straight win over Texas in Austin, the Cowboys can now knock Baylor out of the BCS national championship race in a game with the Big 12 title on the line. A win could put the Pokes in position to claim their second league title in three years. Mike Gundy's squad has really played its best football since Clint Chelf took over at quarterback and Desmond Roland assumed the bulk of the workload at running back. The Big 12 title race won’t be over after this showdown, but we will find out esentially which is the league's best team. The Pokes should be able to at least keep this game close for four quarters, especially with Lache Seastrunk, Glasco Martin and Bryce Hager questionable for the Bears and the Cowboys boasting a strong defense. But Josh Stewart and Justin Gilbert are banged-up for the Pokes as well, and the Bears have an abundance of weapons even with a few injuries. The last time Baylor defeated Oklahoma State in Stillwater was 1939, so a win would be yet another huge step for the program.

Washington at Oregon State: Will quarterback Keith Price be able to start for the Huskies? We still don't know after he was knocked out of last week's loss to UCLA. Price believes that he'll be able to play. If not, the start will go to intriguing youngster Cyler Miles as Steve Sarkisian's squad tries to put an end to its road woes. The Beavers, meanwhile, have been a one-dimensional offense as of late, and it has led to a second-half slide for Mike Riley and Co. Quarterback Sean Mannion has tossed seven interceptions in his last two games without a strong complementary rushing attack. Keep an eye on Huskies running back Bishop Sankey, who may need to be leaned upon even more if Price is unable to go.