Auburn claimed its first national title since 1957 on Monday night as the Tigers beat Oregon 22-19 on a 19-yard Wes Byrum field goal as time expired in the BCS National Championship Game in Glendale, Ariz.

And the reason why the SEC won its fifth consecutive national title is because the Tigers had the two best players on the University of Phoenix Stadium field. And neither one was quarterback Cam Newton. 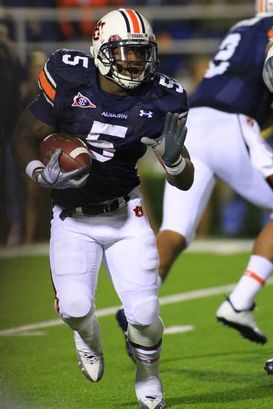 Defensive tackle Nick Fairley quite possibly became the No. 1 pick of the Carolina Panthers in April's draft with his dominant performance against an overmatched Ducks offensive line. The 298-pounder continued to be a game-changer, logging three tackles for loss, including a sack. He led the front four's collective strong effort as LaMichael James, Kenjon Barner and the rushing attack was held to 81 rushing yards.

Auburn's true freshman running back Michael Dyer finished with 143 yards on the ground and was chosen as the offensive player of the game after his standout performance. His 37-yard run, in which he appeared down but wasn't as his knee never hit the ground when he was rolling over defender Eddie Pleasant, put the Tigers in field-goal range late in the game. Not only did he have that long run, but his 16-yard dash down to the 1 set up the game-winner.

Of course, Newton was special as usual. After a slow start, the dual-threat signal caller finished the game with 265 yards through the air and two touchdowns, and he added 64 yards on the ground as the Oregon defense made it difficult for him to break off big gains throughout the night.

After being dominated in the second quarter and failing to retake momentum through much of the second half, the Ducks miraculously tied the score at 19-19 on a late touchdown and 2-point conversion, but big runs from Dyer put Auburn in a position to win it on the last play of the game.

You can actually relive all of the madness by checking out my post that ran live throughout the game. It certainly was an odd game, but it was a memorable one as well.

Congratulations to Gene Chizik's squad for helping to ease the pain of the 2004 season when the Tigers went 13-0 but missed playing in the BCS title game. Now onto spring practice we go...

Really, it's not that far away.

The only question that remains is whether the AP will vote an undefeated TCU No. 1 over Auburn. Obviously, that's highly unlikely.