Auburn begins spring practice on Friday, and the squad will be breaking in new coordinators on both sides of the ball.

Brian Van Gorder has taken over for Ted Roof as defensive coordinator, and the former Atlanta Falcons DC inherits a unit that is young but talented, a group that gained valuable experience last season with a plethora of first-year starters. Eventually Van Gorder wants to bring in bigger bodies at linebacker and along the line, but in the meantime expect the Tigers to be a more attacking defense. 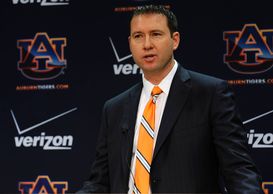 Scot Loeffler takes over for Gus Malzahn as Auburn's OC.

On the other side of the ball, former Temple OC Scot Loeffler will be under the spotlight at he takes over for Gus Malzahn, who now heads the Arkansas State program after Hugh Freeze was hired at Ole Miss. The 37-year-old Loeffler's primary job this spring heading into the summer is to find a starting quarterback. And that won't be easy.

The battle between Clint Moseley, Kiehl Frazier and Zeke Pike will last into fall camp because the 15 practices this spring will be dedicated to learning the system, which will feature a return to a more pro-style attack with an emphasis on the run after operating the spread under Malzahn. Loeffler said the priority will be to run the football effectively from various schemes, so don't expect some spread principles to completely go away. Whoever is the starter at QB likely will dictate how much spread remains.

Moseley started the final six games of the 2011 season, but that doesn't give him a big edge going into spring ball. Kiehl Frazier threw just 12 passes as a freshman but will get the chance to prove to Loeffler that he is more than just a run threat. And Pike is a good-looking freshman who needs to adjust to the rigors of college life while adapting to facing an SEC defense every day in practice.

Loeffler's first season has been made more difficult with 1,000-yard rusher Mike Dyer leaving to join Malzahn at Arkansas State. So speedy Onterio McCalebb is the most experienced back, with Tre Mason, Corey Grant, Mike Blakely and freshman Jovon Robinson competing for reps behind him. Receiver Emory Blake and tight end Philip Lutzenkirchen return as key weapons in the passing game, but there's a lot of youth that needs to step up for the Tigers offensively to compete in the tough SEC West.

But first thing is first: implementing a system that will not look like the one that Cam Newton excelled in when the Tigers won the BCS national championship.