Gus Malzahn is finally a head coach at the FBS level.

It's just not exactly at a place that many had envisioned the Auburn offensive coordinator landing after helping the Tigers win the BCS national championship last season. 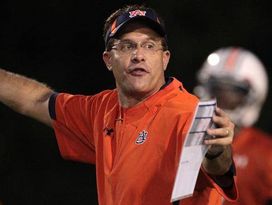 Gus Malzahn is returning to comfortable surroundings in the state of Arkansas.

Malzahn will be returning to his home state to become the next head coach at Arkansas State, replacing Hugh Freeze, who took over for Houston Nutt at Ole Miss last week after leading the Red Wolves to a 10-win season.

The former Arkansas offensive coordinator, who made $1.3 million per year at Auburn, will be taking a pay cut in exchange for a head job. He's expected to make around $850,000 per year with his new school.

It is unknown whether he will remain with Auburn through the team's Chick-fil-A Bowl contest on New Year's Eve.

The state of Arkansas is certainly Malzahn's comfort zone, as he was a high school coaching icon in the state (he led Springdale High to an undefeated state championship season in 2005) before serving under Nutt with the Razorbacks in 2006. He then assembled prolific offenses at Tulsa in 2007 and 2008 before joining head coach Gene Chizik's staff at Auburn in 2009. He won the Frank Broyles Award as the top college assistant last season after helping the Tigers set an abundance of offensive school records with Heisman Trophy-winning quarterback Cam Newton.

However, Auburn struggled offensively this fall behind an inexperienced offensive line and three untested quarterbacks, and the unit ranks 104th in the nation in total offense heading into its bowl game.