The Crimson Tide was in control from the very beginning, as head coach Nick Saban and Co. took a 28-0 lead and never looked back. The only BCS title game that was more of a blowout was USC's 55-19 victory over Oklahoma in the 2005 Orange Bowl. 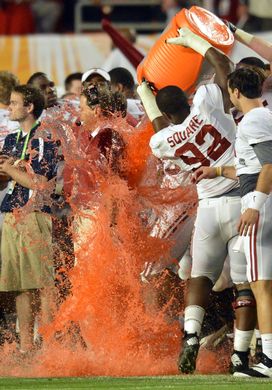 US PRESSWIRENick Saban is used to getting the Gatorade treatment.

Most impressive for Alabama was its offense, which for some reason continues to be overlooked coming into seemingly every marquee contest. The Notre Dame defense had given up just nine touchdowns in 12 games on the season entering this game, but the Crimson Tide found the end zone six times against the Fighting Irish. Alabama had two 100-yard rushers in Eddie Lacy and T.J. Yeldon and a 100-yard receiver in Amari Cooper, the offensive line physically dominated the stout Irish front seven and quarterback AJ McCarron had a Heisman Trophy-worthy performance by tossing four touchdowns against no interceptions.

So what's next for the Tide?

Well, they're not going anywhere. And that's bad news for the rest of the SEC — and the entire country.

Depending on what Lacy decides to do about entering the NFL Draft, nearly everyone who contributed as an offensive playmaker will be back for the Tide in 2013.

If Lacy decides to bolt, Yeldon returns to a backfield that will be deep once again because running back is a position that has remained a priority for Saban and the offensive staff on the recruiting trail. One just has to look at the stat sheet Monday night and see the 265 rushing yards and nearly 6.0 yards per carry average to know that pounding the ball on the ground is the norm for the Tide. Next fall, Dee Hart will likely have his role increased after getting injured mid-season, and at least one of the Class of 2013 commits — Tyren Jones, Altee Tenpenny and Derrick Henry — could also figure into the mix. McCarron, meanwhile, will be coming back to Tuscaloosa, although I would argue that he'd be the most polished passer in this year's draft. And at receiver, Cooper, Kevin Norwood, Kenny Bell and Christion Jones will remain McCarron's top options. Losing so much talent from the offensive line will be an adjustment, but because of the system in place don't be surprised if players such as Arie Kouandjio, Chad Lindsay, Ryan Kelly and Austin Shepherd become household names alongsidr stud Cyrus Kouandjio.

Defensively, Ha'Sean Clinton-Dix, Deion Belue, Geno Smith and Nick Perry will be among key players returning to the secondary, while Adrian Hubbard, Trey DePriest and Xzavier Dickson are among the playmakers returning to the front seven. The key will be finding a replacement for Jesse Williams at nose guard, as that position is key in the 3-4 scheme.

Certainly, the Tide will have to navigate an always-difficult SEC slate in 2013. And all eyes will be on the rematch with Johnny Manziel and Texas A&M in College Station. But, as Saban always says with any other victory, the Tide will enjoy the title-game win for 24 hours and then move on to prepare for the next challenge — which is to continue what is unquestionably dynasty territory entering the offseason.