The final game of the 2011-12 college football season takes place tonight as LSU looks to cap off an undefeated season with a win over SEC West foe Alabama in the BCS national championship game at the Superdome in New Orleans.

These two teams first met on November 5, when the Tigers claimed a 9-6 overtime win over the Crimson Tide in Tuscaloosa. Can Les Miles snag yet another win over Nick Saban?

Let's take a look at some key aspects of this contest to keep an eye on:

Has McCarron improved since the first meeting? 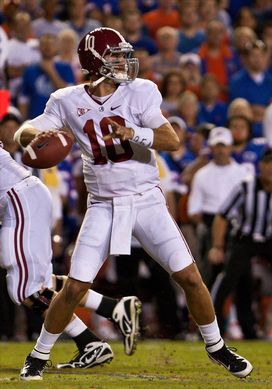 ICONAJ McCarron completed 16 of 28 passes for 199 yards and an interception in the Nov. 5 loss to LSU.

When the Tide dialed up a pass play for receiver Marqis Maze in the red zone, the throw that resulted in LSU defender Eric Reid's interception near the goal line, it may have been the biggest indictment of AJ McCarron, the first-year starting quarterback who threw one interception and no touchdowns in the Nov. 5 meeting. After a mediocre game against Mississippi State the next week, McCarron completed at least 73 percent of his passes and did not have an interception in his final two contests, throwing three touchdowns in each game to close the season strong. Even though the games were against Georgia Southern and an Auburn team with a generous defense, McCarron looked more confident and comfortable running the show. But does Saban and offensive coordinator Jim McElwain have enough confidence in the sophomore to get the job done through the air in New Orleans? Because as good as Heisman Trophy finalist Trent Richardson is on the ground, the Tide will need to have some semblance of a passing attack against this John Chavis defense.

Richardson was able to find himself wide open on a few passing plays out of the backfield in the first meeting because of blown Tigers coverage, but those mistakes may not occur in the second meeting. So Alabama will need Maze, Darius Hanks and Kenny Bell to get separation from the Tigers' defensive backs, who comprise the deepest secondary in the nation. Look for McElwain, the new Colorado State head coach, to dial up some quick throws for his QB, but McCarron will need to make good decisions such as not taking a sack on third down in overtime — a play that cost the Tide valuable field position and led to a missed field goal.

With Jordan Jefferson at quarterback, the Tigers are able to run a nice dose of option plays with their deep and talented backfield. We’ll see Jefferson keep the football and stay between the tackles or try to get to the perimeter, and we’ll see 240-pound true freshman Kenny Hilliard, leading rusher Michael Ford, Alfred Blue and Spencer Ware not only pound the ball inside but hit the edge as well, wearing down linebackers Dont’a Hightower and Courtney Upshaw and the Alabama defense. 'Bama already has struggled against one option team this season, allowing Georgia Southern to rush for 302 yards on the ground. However, that was a wishbone-like attack that the Tide won't see from LSU.

But because of the Tigers’ reliance on the ground game, opposing defenses are worn out in the fourth quarter. In the Nov. 5 meeting, Kirby Smart’s defense allowed the Tigers to rush for 148 yards, and the presence of Jefferson was a big factor. He entered the game after starter Jarrett Lee threw interceptions on back-to-back throws, and the offense picked up a little steam. He completed 6 of 10 passes for 67 yards, and he added an 18-yard run on the ground. Even though his other 10 carries only added up to 25 yards, his run-threat capability kept the defense guessing. But as sound as this ground attack is, Jefferson will need to make plays through the air to keep the Tide's defense honest, especially on the occasions LSU finds itself on third and long.

Will Lee get snaps?

Throughout spring practice and the offseason, we heard Miles rave about Jefferson's development under the tutelage of Steve Kragthorpe and how he has grown as a passer in this offense. But his season was marred by suspension, so we weren't able to see the complete Jefferson package until he wrested the starting job away from Lee. Since the 'Bama game on Nov. 5, Jefferson completed 66 percent of his passes with three touchdowns and just one interception. However, he took a step back in the SEC Championship game against Georgia, completing only 5 of 13 passes for 30 yards and a score. While the entire Tigers offense struggled in the first half against the Bulldogs, Jefferson's subpar play stood out. We have seen Miles employ the two-quarterback system for the last few years, and I wouldn't be shocked to see Lee get snaps in this one if the offense is stagnant. Of course, the Tigers would lose that option game in that scenario. But keep in mind that Lee's two picks against the Tide were just his second and third picks of the year, and the Tigers likely wouldn't be undefeated without Lee, who stepped in admirably for Jefferson when he was sidelined. 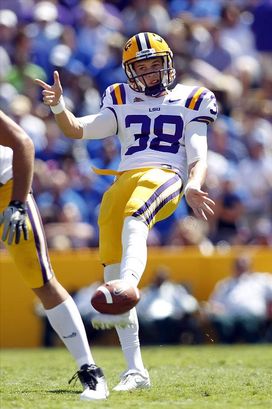 ICONNot a lot of teams have a weapon like Brad Wing on special teams.

We all remember how special teams played a significant role in the first meeting between these teams. The Crimson Tide missed four field goals, including three in the first half to keep the Tigers in the game despite being outplayed. Kicker Cade Foster was wide right from 44 and 50 yards in the first quarter, and he failed to connect on a 52-yard attempt on the Tide's first and only possession in overtime. Fellow kicker Jeremy Shelley had a 49-yard try blocked. Unquestionably, special teams played a large role in Alabama's defeat.

Meanwhile, with the exception of a shanked 22-yard punt to open the second half, LSU punter Brad Wing had his usual strong game. His signature kick came late in the game when he booted a 72-yarder that was helped by Marqis Maze's decision not to field the punt. It rolled down the field, taking away from the Tide what would have been very good field position and a chance to kick a potential game-winning field goal to eliminate the need for an overtime.

In the return game, the big question is whether Nick Saban will kick to Tyrann Mathieu, especially after seeing the impact he had on games the last two weeks of the season against Arkansas and Georgia. The Honey Badger returned a punt 92 yards for a game-tying and game-changing score against the Razorbacks, and he followed that up with a 62-yard return for a touchdown against the Bulldogs when the Tigers looked lifeless on offense. Will he receive the Devin Hester treatment in the rematch — directional punting by the Tide to avoid a big return? And will Maze be able to have a bigger impact on punt returns than he did in the first meeting?

All season long, I have declined to make predictions on any game, instead choosing to let the games play out and analyze afterwards. But a lot of people have asked my thoughts on this one and who I think will win.

While I know it's hard to beat a strong team twice in one season, Les Miles has led LSU through a special season. And the Tigers just have a little too much depth for the Tide to deal with on both sides of the ball. I like the Tigers in a 16-13 or 20-16 type of game.